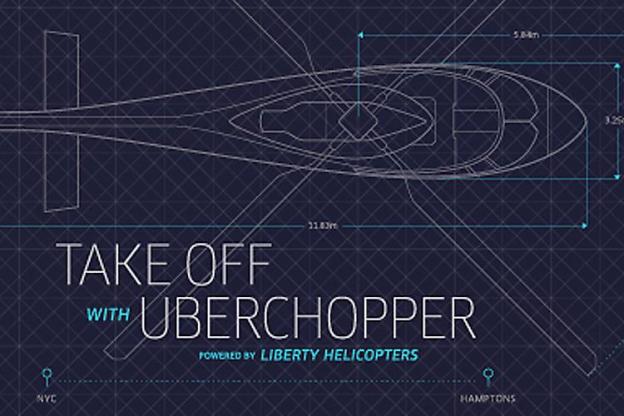 Very recently, two separate companies in two separate cities pitched helicopters as a reasonable method of short-term urban transit. Their promotional stunts used luxurious excess as a marketing tool and made it abundantly clear that people in the start-up transit app business have a very tenuous grip on how regular people live their lives.

In New York, private car service app Uber enticed fans with visions of choppering into the Hamptons without having to deal with the headache of navigating a still-disorganized post-Sandy landscape of clogged roads and sweaty detours.

Uber’s press release equates having a helicopter chauffeur with the epitome of the American ideal of freedom and has the following pompous kernel of copy: “Blair Waldorf, Don Draper, and Jay Gatsby got nothing on you. This is the epitome of luxury, convenience, and style.”

In San Francisco, a rideshare service called Avego has also been busy promoting cushy copter rides. The company used the BART strike as a jumping off point for its own helicopter-based promotional stunt that urges people to simply fly over the labor movement. And Avego’s method of advertising underlines how the BART strike could basically be consigned to someone else’s problems if you simply choose to ignore it at 1500 feet. “Rise above the BART chaos,” the website implores, “be an eagle, not a turkey.”

Right, because it’s way more elegant and inherently better to be so well off that you can side-step large-scale, collective manifestations of Late Capitalist malaise by spending more money than the average American worker makes in a month to commute. Right. At least Avego’s helicopter rides are prizes, so you don’t actually have to pay them thousands for a jaunt across the city. So even though their promotion was a weird, insensitive choice, they’re not actually advocating that people eschew public transit for helicoptering around.

The UberChopper, however, is a real thing that people paid money to go inside of and fly around in.

The traffic reports out to the Hamptons look bleak. Use #UberCHOPPER to stay above the fray. pic.twitter.com/8quit42KcB

Uber doesn’t primarily offer chopper rides; it started in San Fransisco as an alternative to taxi services, and it lets users sign up, input their credit card information, and download apps for their iPhones or Androids to arrange rides that are automatically charged to their account. And people who don’t have the funds (or just have too much common sense) to spend $3,000 on a helicopter ride to the Hamptons still use and love Uber. Though the driving services vary from city to city and are generally on par or more expensive than taxi and limo services, Uber isn’t an outrageously priced service. But the company is certainly a for-profit business that wants to displace other forms of transit, and apparently it’s toeing into the luxury market more aggressively.

Salon’s Andrew Leonard thinks that Uber is intentionally being provocative and “pressing the class warfare button” with the UberChopper. And yes, people are incensed that the world we live in allows people to order helicopters on their phones while others in the same geographic location are struggling to keep their Metro cards full. But to say class antagonism as an advertising ploy was Uber’s primary goal with UberChopper is an exaggeration. If Uber found out that this type of campaign would garner attention – even outraged attention – that certainly would’ve been a boon, but the UberChopper is a service offered sincerely, primarily courting a high-end niche market rather than attempting to get press through a stunt service – which is more along the lines of what Avego is doing in San Francisco.

Avego is a rideshare app, so it encourages people to choose cooperating with each other and bartering for rides instead of taking standard transit. The core service it offers is commendable; it encourages sharing a car instead of ordering a separate one. The promotional stunt that it’s using to showcase its services, however, is blithely out of touch. Valleywag’s Sam Biddle received a PR email asking him to write about Avego’s Airlift that made it clear Avego was not above turning a serious issue as a promotional boon. As bizarre as Avego’s promotional stunt is, however, it worked – the company had a 8,825 percent increase in activity during the BART strike.

Uber is part of the San Francisco transit fray as well, gaining business as the 400,000 people who couldn’t use BART services sought alternatives. But Uber’s involvement in the BART strikes wasn’t nearly as controversial as its role in an earlier transit strike. In 2011, while the city’s taxi drivers picketed, Uber offered a one-day lower fare rate, and framed it as a noble act. “Uber and its driver partners are planning to stand in solidarity with the people of San Francisco” the Uber blog explained. “That means making sure ordinary folks can get around the city while the taxi drivers strike to get a fair deal.”

And what did Uber do to stand in solidarity? They arranged for their drivers to take a one-day pay cut (which seems like the kind of thing the drivers on strike would be very much against) with the promise of recouped income since they will donate their extra revenue for the day back to the Uber drivers. It’s difficult to see how this could possibly help striking taxi drivers, since it essentially offered a scab service, and did everything it could to attract San Franciscans away from the standard service and toward its own. This type of behavior explains why taxi drivers in San Fransisco filed a class action suit against Uber in 2012 – one in a string of similar run-ins, with the same sort of taxi complaints happening in D.C. and elsewhere.

Disruptive services, by their very definition, always require a casualty, and that casualty put into the simplest terms is “the old way of doing things.” Airbnb is often mired in legal messes because it circumvents the bureaucracy required for traditional ways of renting rooms, but it would be hard to argue that the service does not benefit ordinary people, since it both provides cheaper accommodation options and lets regular users supplement their income with short term rentals. Uber’s disruptive service is harder to endorse because it’s out-of-reach for many.

If anything, Avego and Uber’s bling-bling, excessive ‘copter promotions aren’t disrupting transit, only highlighting the class warfare within it.

Uber and Airbnb are both services beloved by their users that face challenges from the old order, but while Airbnb is actually offering substantially more affordable accommodations and a way to earn extra income, Uber just gives people who have enough extra cash to take cabs everywhere a nicer ride. Uber is not a villainous service just because it caters to a certain class, though it certainly challenges traditional taxi companies and opposes government regulation. Uber drivers have a nicer time than ordinary taxi drivers, since they don’t have to deal with fleeing passengers, nor do they have to give kickbacks to their dispatchers. So it’s not like Uber is bad to its workers. And it’s not the only service that provides short-term helicopter rides – there are plenty of others in New York City – so it makes sense that Uber would consider expanding its services to members of its clientele who want both car rides and higher-end transit options.

Helicopters are a logical extension for a service that may seem reasonable to affluent urbanites but remains too pricey for plenty of middle-class and lower-class Americans. And just because a service is financially nonviable for a great swath of the population doesn’t make it nefarious; otherwise we’d be calling the airline industry an arm of the devil (which, actually…) and blasting any business that makes something that most people can’t afford as inherently immoral. Sometimes companies make products for an elite class or just the upper-middle class – but it doesn’t make them malicious.

The problem is that Uber tries to pass itself off as a service that will disrupt the transit industry and bring car service to the Average Joe – and UberChopper certainly does not speak to that cause. Uber claims to stand in solidarity with people stranded by public transit strikes, but the service it offers is less regulated and often more expensive, and it requires a smartphone and a working credit card, two things desperate people and plenty of public transit commuters don’t have.

Again, that’s not to say that Uber is bad. But the way that it’s marketing the UberChopper is playing up class lines in a way that is certainly not endearing it to those of us who aren’t as interested in living like Blair Waldorf as we are supporting fair wages and a fairer labor force (or you know, just paying an iPhone plan while managing rent and groceries). And while Uber is filling a very real need – I’ve nearly torn my hair out in Chicago, Toronto, Seoul, and London trying to find taxis, and after using Uber I can definitely affirm that it’s a way more pleasant experience for the rider – it isn’t necessarily doing so in a positive way, since it thumbs its nose as regulations and has a blog that positions frequent Uber use as more affordable than owning a car as though that makes it a viable transit option for most people. According to the math Uber cites, spending $53 on rides a day is a sensible deal.

That kind of money per day only makes sense to a margin of people in the U.S., and those people are Uber’s targeted clients. And the service’s appeal isn’t just that you can get a car faster, it’s also that it’s a more exclusive, higher status way to get around. That’s why the helicopter gambit was a smart marketing move for both Uber and Avego – even though Avego isn’t as reliant on the elitist hook, positioning itself as a high-end transit alternative will attract higher-end clients, who will agree to paying higher ride share prices to each other, which will let Avego boost profits.

Both Uber and Avego are enjoying massive success in San Fransisco due to the transit troubles, and they’re both apps that offer services the market did not previously provide. It’s fine that they exist, even though their helicopter promotions are très tracky. But what’s disappointing is that there are so many different alternative transit apps flourishing that would truly empower people of average incomes who might need transit solutions more to get around city-scapes have not taken a hold. If anything, Avego and Uber’s bling-bling, excessive ‘copter promotions aren’t disrupting transit, only highlighting the class warfare within it.

How to join a Zoom meeting