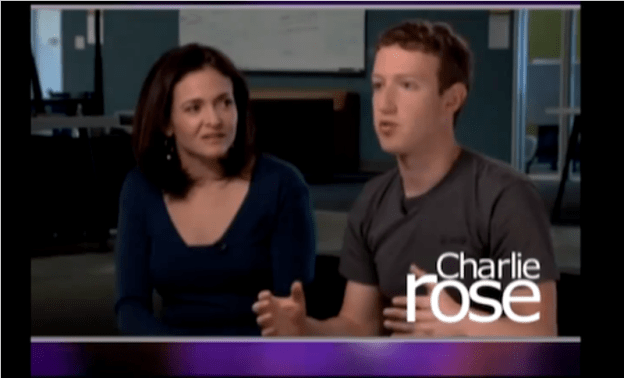 Facebook’s CEO and COO, Mark Zuckerberg and Sheryl Sandberg, appeared on Charlie Rose last night to discuss the social network’s evolution and their respective leadership roles. While we’ve all heard Facebook’s mission statement and professions of connecting the world time and time again, both executives were surprisingly candid about a number of subjects.

“It’s—honestly, it’s not something I spend a lot of time on a day-to-day basis thinking about it now.” – MZ

“That’s not something we’re working on or focused on right now because it’s not a decision we have to make.” – Sheryl Sandberg

“But since, for right now, we’re not available, and we don’t have an immediate path to become available, it’s not—these are not policy decisions we have to make.” – MZ

“You know, when I think about this, if you compare Facebook and Google to, you know, most of the world, right, to other companies in other industries, they’re actually in some ways, incredibly similar. They are founder-led… Silicon Valley based technology companies that… [are] driven by engineering. They’re very similar.” –SS

“Google is fundamentally about, you know, algorithms and machine burning.” –SS

“I mean, people like to talk about war. You know, there are a lot of ways in which the companies actually work together. There are real competitions in there. But I don’t think that this is going to b the type of situation where there’s one company that wins all the stuff.” –MZ

“I mean, I think, you know, Google, I think in some ways, is more competitive and certainly is trying to build their own little version of Facebook. But you know, when I look at Amazon and Apple and I see companies who are extremely aligned with us.” – MZ

“Our goal is not to build a platform; it’s to be across all of them.” – MZ

“There’s one thing that I think is most important to Facebook, which is that we are focused on doing one thing incredibly well. We only really want to do one thing. Connect the world.” – SS

“I mean, he—he’s amazing. He was amazing. I mean, he—I had a lot of question for him on how to build a team around you that’s focused on building as high quality and good things as you are. How to keep an organization focused, right, when I think the tendency for larger companies is to try to fray and go into all these different areas. Yeah, I mean a lot just on the aesthetics and kind of mission orientation of companies. I mean, Apple is a company that is so focused on just building products for their customers and their users.  And I think we connected a lot on this level of, okay, Facebook has this mission that’s really more than just trying to build a company that has market cap or a value. It’s like we’re trying to do this thing in the world. And I don’t know, a lot of it I just think we connected on that level.” – MZ

You can watch the entirety of the interview here, and check out a preview below.