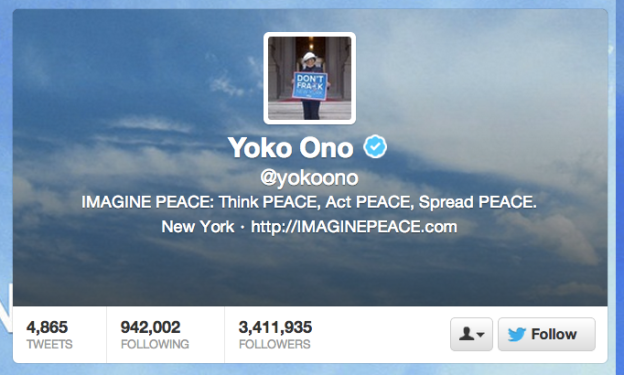 No matter how long you’ve been on Twitter, or how cynical you declare yourself, there are moments when you get notifications of new followers and recognize a name – be it a particular celebrity or a famous brand – where you find yourself momentarily excited and validated. “I must be awesome if Yoko Ono is following me!” Unfortunately, in many cases, the reality is that these Twitter accounts are often auto-following with an eye to build brands, and have very little interest in your tweets … no matter how interesting.

Yes, it’s cold and a sad use of social media that ultimately dehumanizes you and risks making the brand/celebrity more unlikeable in the process, but that doesn’t mean that it’s not a remarkably popular process. Mediabistro’s All Twitter blog has tracked the 10 Twitter accounts that are the worst offenders, and it’s a surprising collection of companies and celebrities who have found themselves mass-following to the point where their feeds must be near-unreadable. Looking at the list, it almost seems like the set-up for some particularly surreal joke: “What do the Beatles, the British Prime Minister, and a T-Shirt company have in common…?”

According to All Twitter, the 10 professional Twitter accounts with the highest number of accounts being followed are:

For some of those companies, there is an understandable reason for the insanely high number of accounts followed. Hootsuite, for example, is a social media engine; perhaps it’s simply following accounts that are being run through its software. Similarly, Threadless’ followed account number may be as high as it is because it, too, is an Internet-based, social media-centric service that may have followed a number of accounts as a way of Direct Messaging with customers or potential customers with specific problems.

Of course, that type of argument can’t be made for everyone on that list – particularly the famous figures. Barack Obama’s count is clearly as high as it is as a result of election outreach, but why would Britney Spears follow more than 400,000 tweeters? Perhaps even more surreally, why does Yoko Ono follow nearly one million accounts? Is it part of some ersatz art project that she’s kept secret from the world?

Somewhat impressively, in the time between All Twitter’s compiling of the list and time of writing this post, Ono has added 640 accounts to her follow list, with her current tally at 942,002. Considering that the number of accounts following her is more than three million you have to wonder if the two million plus who aren’t being mutually followed by the artist wonder what they have done to offend her.

Don’t you forget about meme: Relive Vine’s glory days on its web archive