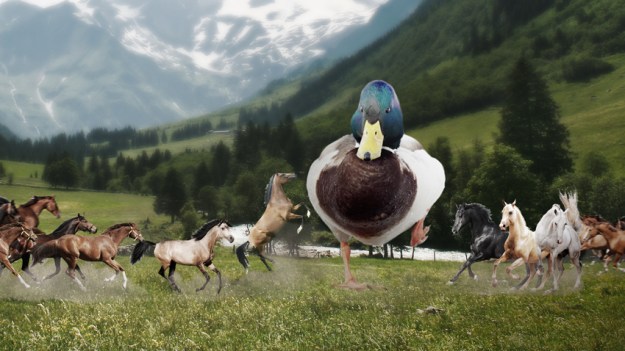 Which would you rather fight: one horse-sized duck, or 100 duck-sized horses?

For reasons only known to the Internet Gods, this question has been asked hundreds, if not thousands, of times – and, in the process, transformed from a silly hypothetical into a full-blown meme.

The “horse-size duck vs duck-size horses” quandary apparently originated with a 2003 reader letter to the U.K.’s Metro newspaper, but the theoretical battle scenario rose to national prominence last August after a Reddit user posed the question to President Barack Obama during his “Ask Me Anything” interview with the community. Alas, the president ignored the question – but plenty of others have given their take, from “Mythbusters” co-host Jamie Hyneman to New York Times columnist Nicholas Kristof.

“Definitely one horse-sized duck,” wrote Kristof. “Then I’d distract it with some cracked corn and, as it gobbled it up, I’d jump on its back and take it for a flight. I’m too poor to afford a private plane, so a personal horse-sized duck would be a nice alternative.”

Now, you might be thinking, “What the hell does a newspaper columnist know about opening a can of whoop-ass on mythical beasts?” This isn’t poverty in Africa we’re talking about here. This is war. So rather than rely on Kristof’s uneducated opinion, we reached out to some real experts who can settle this matter once and for all.

The first thing to take into consideration is that ducks are nature’s wusses. “Ducks are not really a real feisty sort of animal,” says Dr. Kevin McGowan, an ornithologist (read: bird scientist) at Cornell University. If their nest is threatened, “they will bite. They will rush at a small predator,” he says. But McGowan doubts that even a duck that weighs 1,000 pounds – the size of an average horse – would cause much damage with its bite.

“Bring on your biggest duck,” he says, “I’d stick my finger in its mouth.”

Duck bills are, you see, relatively flat, which means the force of their bite is spread out over a large surface area. A horse-sized duck would probably have the ability to grab hold of you and dunk you, causing you to drown, says McGown. But the bite itself wouldn’t cause much injury. For a duck to have any real power to its bite, it would need to have either a sharp bill, like an eagle, or teeth – think something along the lines of a duck-wolverine hybrid. Now that would be something to worry about. But if all we’re talking about is a giant duck, well, whoopdy freakin’ doo.

And forget about any “death from above” scenarios, too. According to McGowan, there’s no way a horse-sized duck could get off the ground.

“If you go from a duck that’s one foot tall to a 10-foot-tall duck, you have to have more than 10 times as large of wings,” he says. For a horse-sized duck to fly, “you’d have to have around 100-times larger wings. That’s the way the physics of it works. You can’t just scale up.”

So things aren’t looking so hot for the horse-sized duck. But what does a horse expert have to say on the matter? We reached out to world-class saddle bronc rider Wade Sundell to get his take on equine defenses.

“The most dangerous thing about a horse would probably be its feet,” says Sundell, “because they can kick you, step on you.” And when that happens, there’s a good chance you end up in the hospital, he says. But that’s a horse-sized horse. What about a duck-sized one?

“It’d be pretty harmless, I’d think,” says Sundell – at least if we’re only talking about one duck-sized horse. Up the number to 100, and that changes the fight entirely. “A hundred of them could probably do some damage.” With that many duck-sized horses gunning for you, Sundell has just one bit of advice: “Try to get to safety as fast as you can.”

“I’d rather take on one than a hundred,” Sundell continues. “Because I could focus on just the one, instead of having a hundred of them coming at me. I feel like my odds would be way better if one thousand-pound duck was coming at me than 100 duck-sized horses. I’d feel way more comfortable. I’d feel like I can defend myself a lot better. And I would try to go for the neck.”

So there you have it, folks. Fighting one horse-sized duck would be nothing compared to 100 duck-sized horses. Now that we have that solved, can we please stop asking this idiotic question?

Special thanks to Cornell University and the Professional Rodeo Cowboys Association for making this absurd story possible.