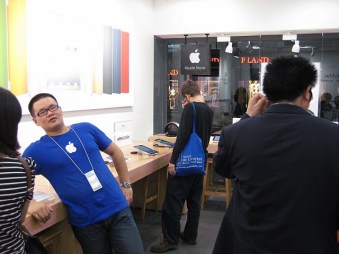 The law books in the ‘patent infringement’ section of Apple’s legal section are probably wearing a bit thin with all the use they’ve been getting lately, while the ‘trademark infringement’ titles are likely covered in cobwebs. Up to now, that is.

It seems the gathering dust has been blown to the floor, with the legal tomes having been recently pulled from the shelves. According to an Apple Insider report, the Cupertino company has decided to take on those behind the fake Apple retail stores that seem to have been popping up here, there and just about everywhere.

The existence of such stores first came to light last month when an American ex-pat blogger in Kunming, southern China, posted a bunch of pictures of what looked to be genuine Apple stores – except that they weren’t. The stores seemed so much like the real thing that apparently some employees actually thought they were working for the American computer giant.

It seems that Steve Jobs  and his team have decided not to sit idly by. According to Apple Insider, Apple (the real Apple) recently filed a trademark infringement suit in a New York court, targeting some “50 John Does and unnamed businesses.”

Details pertaining to the suit were scant as they remain under a court seal, so it’s not clear if overseas operations are among those named in the lawsuit or if they are all based in the US. While most, if not all, of the stores in the US are unlikely to be out-and-out copies of Apple’s own (like some of those seen in China), the company has nevertheless decided to attempt to do something about these copycat businesses.

Despite the court seal, Apple Insider has managed to get details of at least one defendant – Apple Story Inc., located in Queens, New York. Nice name. We’re wondering if there’s also an Apple Shore out there somewhere, or possibly an Apfel Store.

As for the fake stores in China, government officials have closed at least two of the stores – not because of any copyright infringement but because apparently they were operating without official business permits.

Will Google ever lose its throne as king of search? Here are its main contenders
Amazon to pay customers up to $1,000 in damages for defective items
Zoom agrees to pay whopping settlement fee over ‘zoombombing’ and privacy
PayPal vs. Google Pay vs. Venmo vs. Cash App vs. Apple Pay Cash
Twitter finally enables tabbed option to toggle between home and latest tweets
Boeing gets permission for Starlink-like internet-from-space project
Robinhood reports data breach affecting 7 million customers
Twitter Spaces is now accessible to people without accounts
How to unsend an email in Gmail if you accidentally sent it
Twitter just fixed one of its most annoying problems
These Chrome extensions will put cash-saving coupons right in your browser
Twitter taps big retailer for launch of new livestream shopping feature
SpaceX apologizes to customers for Starlink shipping delays