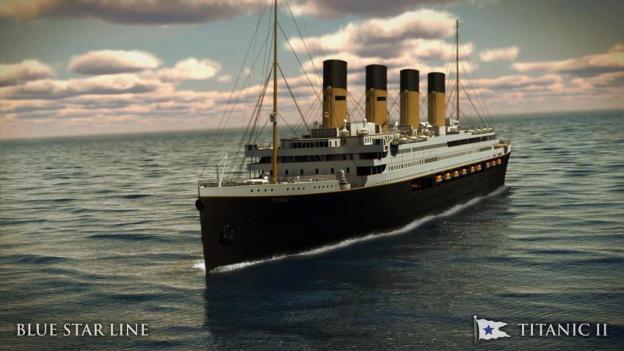 Would you fancy sailing on the replica of a ship that 100 years earlier sank with the loss of more than 1500 lives? Australian billionaire Clive Palmer certainly hopes so, as he’s about to invest a chunk of his wealth in building Titanic II, a full-scale copy of the ill-fated Titanic.

On top of that, he plans to sail the passenger liner from Southampton to New York, following the same route as the Titanic in 1912, although hopefully this time there won’t be a large iceberg in the way to make a mess of things. The mining tycoon said he wanted the ship to be a tribute to those who built the original vessel and honor those who perished in the tragic accident 101 years ago.

Palmer announced his ambitious plans for Titanic II at a press conference in New York on Tuesday. The ship, just like the original, will feature an ornate grand staircase, Turkish baths, a smoking room and a gymnasium, while its exterior will pretty much be an exact copy of the original, including its four distinctive rear-slanted funnels.

In a move that you’ll consider as either cheesy, fabulous or a little bit weird, the 2,400 passengers will have the option of wearing period costume during the Atlantic crossing.

When asked whether Titanic II would be “unsinkable”, Palmer refused to be drawn. Not wanting to jinx his project, he simply said that “anything will sink if you put a hole in it,” adding that these days, because of global warming, there are far fewer icebergs floating about the North Atlantic.

If all goes to plan, the ship, which will be built in China, will first sail from Shanghai to England some time in 2016, before crossing the Atlantic from Southampton to New York.