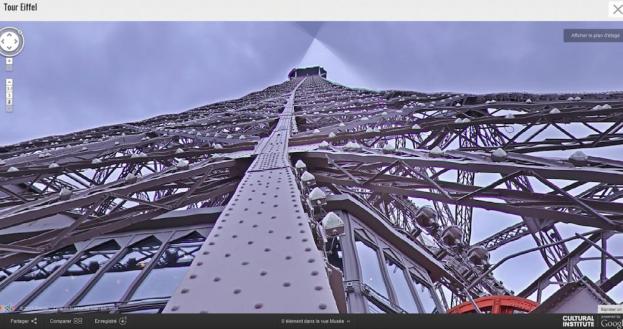 A couple of weeks after Google rolled out Street View imagery from the top of the world’s tallest building, the Burj Khalifa in Dubai, the Web giant has turned its attention to the French capital and given the same treatment to the city’s majestic Eiffel Tower.

Working with the Eiffel Tower Operating Company, Google has uploaded not only a stack of panoramic imagery gathered from the Tower’s three viewing platforms, but also three immersive online exhibitions comprising 50 archival images, plans, engravings and photographs explaining the story of the Eiffel Tower’s development as well as its social impact in the 19th century.

“In order to capture the imagery, the Street View team followed in the footsteps of 7 million annual visitors and ascended multiple floors of the Tower,” Mark Yoshitake of the Google Cultural Institute wrote in a blog post introducing the new material. “Using the Street View Trolley (designed especially for monuments and museums) they filmed 360-degree views of the monument’s architecture and its views over Paris.”

At 324 meters, the Eiffel Tower was the tallest construction in the world when it opened in 1889, holding the title for 40 years until a certain Chrysler Building in New York appeared on the scene.

Yoshitake said it’d been “awe-inspiring to get to see the spectacular vision and the detailed architectural capabilities exemplified by the plans more than 100 years ago,” adding, “It required tremendous knowledge of special planning and physics to ensure that 18,000 separately made pieces would come together as one.”

Following the mapping of the Burj Khalifa last month, and now the Eiffel Tower, we can expect to see many more of the world’s tallest structures popping up on Street View from hereon in, though if you suffer from vertigo you’ll probably want to stick to its more traditional ground-level street-based imagery….

Google Shopping gets a price tracker and a new ‘Buy on Google’ guarantee
Your favorite calendar apps can also get spam. Here’s how to block or report it
Apple Maps adds Street View-style imagery, but with a neat trick
Google Chrome will get a Reader Mode for distraction-free desktop browsing
How to save a webpage as a PDF
How to download music from YouTube
How to find archived emails in Gmail and return them to your inbox
How to sync your Outlook Calendar with your Google Calendar
How to block an email address in Gmail
How to easily log in to multiple Gmail accounts at once
How to change your Yahoo password
How to download Vimeo videos to your PC and phone
Kaspersky VPN should be your go-to for secure connections and privacy