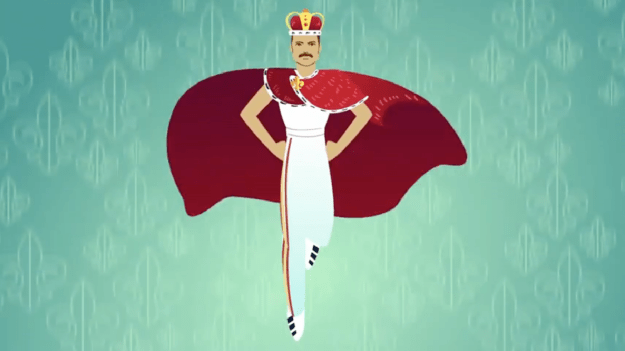 Today, September 5, would be the 65th birthday of British rock legend Freddie Mercury, the Queen frontman who died on November 24, 1991 from bronchopneumonia that resulted from a years-long battle with HIV/AIDS. He was 45-years-old.

To honor this musical genius, Google has created a 98-second-long animation, set to Queen’s 1978 hit “Don’t Stop Me Now,” which was written by Mercury. The Google Doodle appears on the Google homepage for many countries around the world — not the US, however, as we are celebrating Labor Day, not Freddie Mercury’s birthday.

Accompanying Mercury’s Google Doodle is a revealing and heartfelt blog post by Queen guitarist, Dr. Brian May, which appears on the official Google blog. A selection:

“To create with Freddie was always stimulating to the max. He was daring, always sensing a way to get outside the box. Sometimes he was too far out … and he’d usually be the first to realise it. With a conspiratorial smile he would say ‘Oh … did I lose it, dears?!’ But usually there was sense in his nonsense—art in his madness. It was liberating. I think he encouraged us all in his way, to believe in our own madness, and the collective mad power of the group Queen.

“Freddie would have been 65 this year, and even though physically he is not here, his presence seems more potent than ever. Freddie made the last person at the back of the furthest stand in a stadium feel that he was connected. He gave people proof that a man could achieve his dreams—made them feel that through him they were overcoming their own shyness, and becoming the powerful figure of their ambitions. And he lived life to the full. He devoured life. He celebrated every minute. And, like a great comet, he left a luminous trail which will sparkle for many a generation to come.”

The Google Doodle is the work of illustrator Jennifer Hom and her team, who spent three months creating the intricate illustration.

“Considering how colorful Freddie’s career was, we wanted to create a doodle that was just as colorful,” Hom told NBC.

“We’re all really excited because it is such a big doodle,” Hom added. “It’s definitely not our normal doodle.”

In addition to the Google Doodle, the Freddie For A Day fundraising campaign has released the entire one-hour-and-36-minute video of Queen’s classic performance at Wembley Stadium in 1986, in honor of Mercury’s 65th birthday. Proceeds raised by the Freddie For A Day campaign go to the Mercury Phoenix Trust, a charity set up in Freddie Mercury’s name to help fight HIV/AIDS.

Watch both videos below:

Get over it: Why Google’s Father’s Day doodle wasn’t offensive
The best Google Chrome extensions
Twitter finally enables tabbed option to toggle between home and latest tweets
Boeing gets permission for Starlink-like internet-from-space project
Robinhood reports data breach affecting 7 million customers
Twitter Spaces is now accessible to people without accounts
How to unsend an email in Gmail if you accidentally sent it
Twitter just fixed one of its most annoying problems
These Chrome extensions will put cash-saving coupons right in your browser
Twitter taps big retailer for launch of new livestream shopping feature
SpaceX apologizes to customers for Starlink shipping delays
This tech gear proved popular during Black Friday 2021
This tech gear flew off the shelves on Cyber Monday