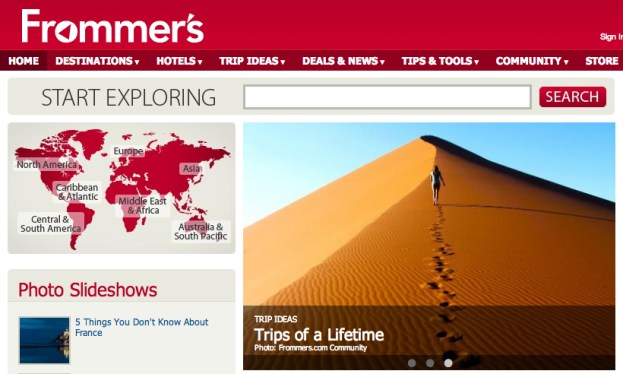 Well, that didn’t last long, did it. Less than a year after Google acquired travel book publisher Frommer’s from John Wiley & Sons for $22 million, it’s decided to sell it – to founder Arthur Frommer.

The Web giant bought the popular brand in August last year with the intention of using data from the travel guides to improve its own local listings and reviews used by a number of its Web services. It’s not known how much Arthur Frommer paid to buy back the rights to the brand he created way back in 1957.

Travel news website Skift reported last month that Google had decided to stop printing the paper-based version of the famous range of guidebooks, but Frommer told the Associated Press this week that he intends to get the printing presses rolling again.

“It’s a very happy time for me,” the 83-year-old travel guru told AP. “We will be publishing the Frommer travel guides in ebook and print formats and will also be operating the travel site Frommers.com.”

With sales of printed guidebooks suffering in the face of competition from the Web, Frommer is a brave man to push on with such editions, but he evidently feels there are still plenty of travelers out there willing to lug around a heavy book rather than pull up local information on a smartphone.

Frommer, who sold the brand to Simon & Schuster in 1977, launched the business in the 1950s with a book he wrote himself called Europe on 5 Dollars a Day. It soon became a bestseller and served as the launchpad for a brand familiar with anyone who’s spent more than a couple of minutes in the travel section of a bookshop or searching online for information on world locations.

AP said it received confirmation from Google on Wednesday that it had sold the brand, with the Mountain View company explaining that “the travel content it had acquired from Frommer’s and Wiley had been integrated into various Google services such as Google+.”

So it seems both parties are happy with the deal – Google has pulled from the books all the information it wanted for its own services, and Arthur Frommer reunites with the brand he created and built over many years of his life.

Install these Chrome extensions on your relative’s new laptop