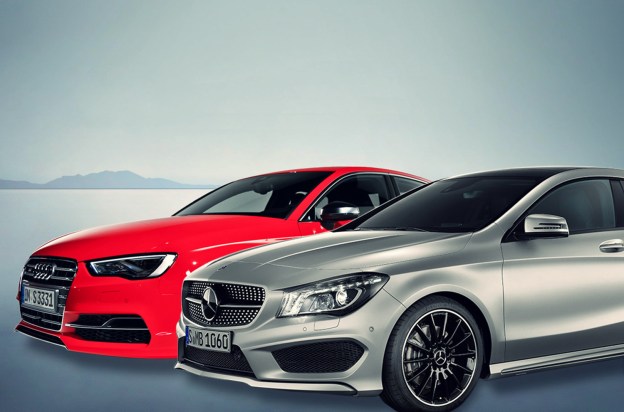 While on a press trip last year in Denver, I had a chance to speak with a few Audi reps about a number of topics relating to the (then) current lineup of A4s and A5s I was about to drive.

During my encounters, I remember speaking to one rep in particular who told me that Audi’s strategy wasn’t simply to sell cars to customers, but rather sell cars to the right customers.

For me, that particular conversation perfectly summed up the luxury segment; an exclusive club protected by a financial barrier meant to keep out the riff-raff while creating a loyal customer base that will not only line the company’s coffers, but add to the brand’s prestige and public image.

But while that’s very much the modus operandi for many a luxury automaker (and will continue to be, at least for the foreseeable future), the status quo is changing and both Audi and Mercedes-Benz have parts to play in this automotive mini-revolution.

Beginning later this year and into next, Audi and Mercedes will begin to roll out their “entry level” luxury cars to the riff-raff, er… masses, with the 2015 Audi A3 Sedan and the 2014 Mercedes-Benz CLA250, respectively.

Both vehicles have been given the task of representing their respective company on the field of battle while appealing to a new (aka “younger”) generation of buyers.

This strategy is perhaps more crucial for Mercedes, whose customer base on average is around 54 years old and getting older – wealthier no doubt too, but older.

And while it’s always good to have an ardent (and wealthy) base of loyal customers to cater to, by not appealing to a broader range of customers, Mercedes runs the ever-so-slight risk of becoming the next Buick or Lincoln. Though, we imagine Mercedes could simply change its name to The Mercedes-Benz Motor Company and instantly enjoy relevancy were that to happen. But I digress.

Audi, on the other hand, doesn’t have that problem. It’s enjoying something of a renaissance at the moment; a surge of momentum that doesn’t seem to be slowing down anytime soon.

Still, despite the recent economic downturn, both Audi and Mercedes are keen to stretch their customer base further and with the CLA250 and A3 sedans, both appear well-equipped to do so.

While I have yet to drive either vehicle, which car – at least on paper — is better equipped to warrant your entry-level money?

The 2014 CLA250 comes with a 2.0-liter inline four-cylinder turbocharged engine pumping out 208 horsepower and 258 pound-feet of torque. Front-wheel drive is standard with a 4MATIC (all-wheel-drive) model also available.

It’s important to note that this will be Mercedes’ first-ever production front-wheel drive car.

The CLA will feature a seven-speed dual clutch automatic transmission with no option for a manual so I’ll go ahead and shed a collective tear with fellow enthusiasts. Alas, we are a dwindling breed.

In attempt to improve fuel economy, the CLA will also sport an Eco Start/Stop feature, which will automatically shut down the engine once the vehicle has come to a complete stop and switch back on in the split second it takes for the driver to take his/her foot off the brake and onto the accelerator.

The 2015 A3 will launch with a 1.8-liter TFSI turbocharged four-cylinder engine, producing 170 horsepower (torque output has yet to be disclosed) and sending power to the front wheels only.

Customers wishing to get their mitts on a quattro version are out of luck, unless they plan on springing for the S3, which will launch sometime after the base version.

Similarly to the CLA, all 2015 A3 models will come standard with a six-speed S tronic dual-clutch transmission, which will feature Audi’s new ‘drive select’ function that allows drivers to adjust throttle response, shift points, and the electromechanical steering effort.

Audi drive select consists of four settings that include Auto, Dynamic, Comfort, and Individual – each providing their own unique ride characteristics.

In this instance I have to give it to the CLA. Not only does it provide more horsepower (and likely more torque) but the CLA’s seven-speed gearbox beats out the Audi’s six-speed and will seemingly offer better fuel economy thanks to its standard Eco Start/Stop feature.

The wild card here, however, could be the Audi’s drive select, which depending on how noticeable the driving dynamics change in each selected mode, could provide a more spirited experience.

Fans of the current A4 will no doubt nod in overwhelming approval at the 2015 A3. It’s every bit as elegant as its larger sibling while also retaining the stark minimalism that keeps Audi’s cars so effervescent, despite other automakers’ determination to over-stylize nearly every new model coming out.

Indeed, Audi fans will appreciate its simple lines, gorgeous LED lights (front and back) and dramatic shield grille. Sure, there are multiple creases and added character lines running beneath the A3’s beltline and sure the rear tailamps sing the Jetta’s influence a little too loudly, but it’s a sharp, well-dressed specimen nonetheless.

The 2014 CLA is dramatically different, with its noticeably more ostentatious design language.

Mercedes, clearly wanting to appeal to a younger audience, infused the CLA with more drama than a TNT series. They do know drama after all…

Dramatic lines jet across the hood with purpose and the large air intakes add an even greater degree of aggression. Around the side, the beltline is noticeably lifted with a character line that cascades into the front headlamps. In the back, the CLA’s raised decklid might help improve aerodynamics but it’s the winged, wrap around taillamps that steal the show – for better or for worse.

The exterior, more than anything else, is going to be subject to personal preference but if I were to simply judge the CLA and the A3’s design on pure dynamism, I would have to go with the CLA.

The Audi, at its heart, is much more derivative of the automaker’s current lineup and while I can’t find any overwhelming fault in its design, the CLA provides more excitement due to its noteworthy and new styling.

Despite embracing its “budget Benz” status, the CLA packs in a number of standard tech features more at home in cars well above its pay grade.

Safety features are also in abundance and include Mercedes’ Collision Prevention Assist and Attention Assist.

Collision prevention integrates with onboard radar to detect and mitigate collisions both in front and behind the car by belting out visual and acoustic warnings to the driver.

Attention Assist assesses the behavior of the driver the moment they enter the vehicle via onboard sensors and continues to evaluate them throughout the trip in order to detect and prevent drowsy driving through audible warnings.

The 2015 A3 sedan is no slouch either, sporting Audi Connect, which gives drivers access to weather and gas prices, travel info and news, and full Google integration, including Google Earth 3D maps, Google Local Search, and Google Voice Local Search.

Of course, getting connected is only half the battle, as slow download speeds will put an end to browsing faster than a flat tire ends a roadtrip, which is why the A3 will offer 4G LTE speeds and connectivity of up to eight devices. Speaking of 4G LTE, Audi says drivers will be able to stream high-definition video and make video conference calls.

Like the A6, A7, and A8, the 2015 A3 will come equipped with Audi’s pre-sense technology. Pre-sense is offered in two packages: a basic and plus package, of which the A3 will sport the latter.

Pre-sense is yet another safety feature that, in the event of heavy braking, automatically tightens the seat belts and raises the vehicle’s windows and sunroof when traveling above 20mph.

Adding even more razzle to the A3’s dazzle, a seven-inch touchscreen that electronically lifts out of the dash will also make its way into the all-new A3. Audi has even incorporated a new touch-sensitive pad atop the standard MMI rotary knob.

Finally, the A3 will feature Audi’s new phone box, a small compartment located under the center armrest that couples to a specialized antenna in the rear windshield in order to boosts a mobile phone’s cellular coverage. Pretty snazzy, eh?

Both the CLA and A3 sport an impressive arsenal of tech weaponry but the A3 sprints ahead of its German rival with increased connectivity, courtesy of its 4G LTE connectivity and more robust Google Suite. The CLA might have the A3 on the ropes with a greater degree of safety tech but the A3 finishes the round strong with a flurry of tech punches that include a larger 7-inch display and touch-pad controls – plus that nifty phone signal-boosting antenna.

Audi says the A3 uses the same “prestige and high quality materials” found in the company’s flagship A8 sedan. Leather interior is standard and the material quality inside is better than what you’d expect to encounter at entry level.

Roominess may not be a virtue afforded the 2015 A3, however, because despite it being a four-door and measuring in at 175.5-inches in length — 10 inches shorter than an A4 and 6.6-inches longer than the current A3 – it feels rather claustrophobic .

Mercedes has typically set the benchmark for luxurious interiors but with the CLA, it seems the bigwigs in Stuttgart believe it has a better chance of enticing younger buyers with an interior that caters to sportier sensibilities.

That doesn’t mean the CLA isn’t luxurious, because it is. It’s just abundantly clear whom Mercedes is aiming for with its design.

Round analog gauges swallow up the cluster without compromise and instead of a leather finish, the Three Pointed Star offers it MB-Tex synthetic upholstery as standard, although leather can be added.

Digging that breathtaking sloping roofline? Prepare to pay for it in the second row as space for moderately taller passengers is adequate at best.

This is a real close call, virtually neck and neck, but the A3 wins by including standard leather interior and a cleaner, more luxurious interior.

The excitement and anticipation being generated by both vehicles is a testament to the quality and prestige both brands are known for. I have no doubt both the 2014 CLA250 and the 2015 A3 sedan will be hits for both German automakers but at this point it’s too close to call. We’ll just have to drive them when they become available!

It will likely come down to the subtle driving nuances felt while on the road but for the riff-raff… er, drivers with their hands and noses pressed up against the glass at their local Mercedes-Benz and Audi dealership, this coming year is an exciting time indeed.