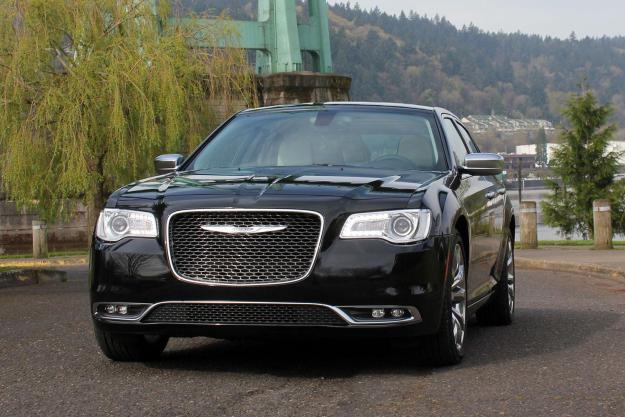 “The Chrysler 300C is the penultimate American sedan, combining a luxury ride with Hemi V8 muscle. This design may not be for everyone, but for the right person there is nothing else.”

The full-size, rear-drive sedan would appear to be a dying breed. Even Ford and GM have given up on this once proud American tradition, relegating their full-size offerings to front-wheel drive platforms. This leaves the Chrysler 300, and its stable-mate the Dodge Charger, standing as the last bastion of the post-war American dream. Fortunately, the biggest Chrysler isn’t just a symbol; it is also a very fun car.

This isn’t to say it is perfect; after all, there are some very good reasons that full-size V8 sedans are going the way of the polar bear. But the Chrysler 300, particularly in its V8 form, makes a case that — certain impracticalities aside — owning a massive, Hemi-powered yacht isn’t just worth it … but a matter of life and death.

During my week with the car I got an ominous text from a friend that she needed a ride to the hospital. Running to the car, and just barely resisting the urge to do a melodramatic Dukes of Hazard style hood slide I activated both of the car’s sport modes and took off.

Fortunately, my Chrysler 300C press demonstrator was equipped with the optional 363-horsepower, 5.7-liter Hemi V8 — the perfect engine for mounting a daring rescue mission. With the transmission in Sport mode, the throttle response is tightened and shift times on the excellent eight-speed transmission are dropped from 400 milliseconds to 250 milliseconds — so quick they are almost unnoticed.

Putting the skinny pedal to the floor sends the 300 forward on a wave of torque, 394 of them to be precise, accompanied by a pleasant growl from the engine room. Still, American car companies have known how to cram big V8s into big cars for a long time. Where the 2015 Chrysler 300 stands out is its handling.

After exiting the freeway and entering a series of twisty roads, I was impressed to find that, while not exactly sports-sedan taught, the big 300 was planted, competent, and even eager. In Sport mode, the normally light steering is tightened up — though heavy or light, it remains fairly numb — and the suspension settings become more aggressive. The result is a bit like a heavyweight boxer who has been studying up on his footwork.

Once I screeched to a halt in front of my friend’s place, the 300 was ready to switch personalities. While speed may have been desired for getting there quickly, comfort was more the order of the day for transporting a person with a 103-degree fever.

After gently helping my ailing friend into her seat, I activated the 300’s heated seats and heating system, which I speculate was designed to melt bone, With the climate control set to boil, it was time to show off the car’s core competence: effortless comfort.

Taken out of Sport, the transmission relaxes and aims for maximum smoothness. And the suspension does its best to convince you it is a massive pile of marshmallows. This is an excellent trick on the highway, or when proceeding through traffic in a stately fashion. My plague-ridden friend was soon nearly asleep in the passenger seat.

Unfortunately, in Comfort mode, there is a certain degree of body roll, as the car digs into those marshmallows in the corner. Combine that with slippery leather and the ride can get a bit … unsettling.

Luxury looks at a luxury price

As I waited for Urgent Care to bestir itself, it gave me time to reflect on the Chrysler 300. From a dynamic perspective, it accomplishes what it sets out to do: straddle the line between cruiser and muscle car. Yet, perhaps its biggest success is its exterior styling.

With its LED lighting and revised grille, the Chrysler 300 gives off a sense of refined menace.

The biggest changes to the car come on the interior, which is almost entirely new. Gone is the cheap, ill-fitting plastic and lousy fake wood. A fully spec’d-up 300C like my press demonstrator boasts real open-pore wood, lashings of leather, and a nice two-tone color scheme. It isn’t quite as nice as what can be found on high end Cadillacs or Audis, but it isn’t that far off either. Then again, with a price of $46,890 it wasn’t much less expensive.

The exterior design hasn’t changed that much from the last generation of the car, but the changes that Chrysler has made are good ones. With its LED lighting and revised grille, the Chrysler 300 gives off a sense of refined menace.

This is the car that every self-respecting Mafioso and hit man should be driving. They better be criminal masterminds though, because the 300 can get depressingly expensive.

A base, V6-powered 300 can be had for as little as $32,000 MSRP. If a customer wants leather and a V8, they will be stuck with higher end versions. The 300C Platinum starts at nearly $46,000. Even there, buyers will have to pay extra for options like adaptive cruise control and blindspot monitoring. The 300 may well be worth that money, but at that price it is uncomfortably close to extremely tempting options like the rear-wheel drive V8 Hyundai Genesis or even a stripped-down Cadillac CTS.

When compared to those options, the Chrysler 300 has its work cut out for it.

The 300’s Hemi packs a lot of torque, so keep a digital eye peeled – so long as its legal in your area. Read our review

Lots of people are going to want to check out for your Chrysler 300, you may want to keep track of them. Read our review

Specifically, the 300 lacks any real sports-sedan cred. Despite its abilities as a luxury ambulance and giggle-producing pseudo-muscle car, offerings from Europe or Cadillac will simply eat the 300 alive in the corners. Chrysler customers will of course be spending less, but not as much less as they might hope.

So what to make of the 300? On the one hand, given its price and size, it is reasonable to compare it to other luxury offerings, but it also somewhat misses the point.

The appeal of the 300 is that it really isn’t like anything else on the market. It offers charisma, comfort, and fun, rather than entering into the packed sports-sedan race.

The 300’s niche may not be huge. The sales figures attest it exists, though. And, for people like me who appreciate what it has to offer — be it is cruising in style or acting as an impromptu ambulance — there really is no substitute.