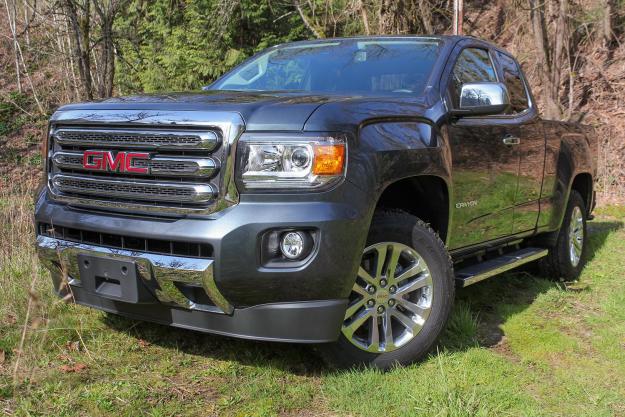 “The GMC Canyon may stand head and shoulders above its competition, but it still suffers from the problems endemic in the midsize truck segment.”

The GMC Canyon enters what is perhaps the most schizophrenic segment in the automotive world: midsize trucks. The main competition is both old — the current Nissan Frontier and Toyota Tacoma are more than a decade old — and surprisingly expensive. Perhaps it is no surprise that the Canyon should have something of a split personality.

On the one hand, it’s refinement and interior quality blow the competition out of the water. On the other, like its competitors, its capabilities come at a shockingly high price.

Classing up the joint

Most midsize truck interiors are so dark, gloomy, and uncomfortable that one could be forgiven for assuming they were built from castoffs of a Guantanamo Bay interrogation room. While the interior of my Canyon press demonstrator was black, riding in it was far from enhanced interrogation.

More than just being comfortable, the interior also lived up to GMC’s classy but conservative aesthetics. The tall, horizontal dash and big chunky controls give it a sense of ruggedness, but the high-quality, soft-touch materials and nicely executed IntelliLink infotainment give it a grown-up, refined sensibility. In fact, my only real qualm with the interior was the glossy, fake wood trim, which seemed to be from even faker trees than usual.

The refined interior is complemented by prep-school road manners. When I attended the launch of the Canyon, the lead engineer explained that they expected many customers to come to the Canyon from cars and crossovers, so a high-quality and quiet ride were crucial.

The biggest problem with the GMC Canyon, by a country mile, is the price.

This focus becomes apparent on the highway especially, where the Canyon rides smooth and quietly. On surface streets, the Canyon does have some more truck-like qualities. The steering is heavier than most cars and crossovers, but it is direct. On rough pavement, the Canyon can’t get past its ladder frame chassis and leaf springs, as the rear-end gets fairly bouncy. Still, the truck remains comfortable.

Unfortunately, the same praise can’t quite be made for the Canyon’s powertrain. The 2.5-liter inline four-cylinder under the hood of my Canyon SLT may have been capable of a rated 20 mpg in the city and 27 mpg on the highway, but it is also rough and slow. Mated to a six speed automatic, the 2.5-liter puts out 200 horsepower and 191 pound-feet of torque.

This is enough to get around, but, at points, it feels like the engine is struggling. The transmission, too, doesn’t quite feel up to the job, with rough shifts and a penchant for holding gears far longer than seems necessary. Fortunately, the far smoother and more powerful 300-hp 3.6-liter V6 is available as a $1,000 option. With a combined 21 mpg on two-wheel drive (2WD) models, it’s only a marginal improvement on the mileage of full-sized trucks.

The biggest problem with the GMC Canyon, by a country mile, is the price. The SLT model I was driving may have cost more than $32,000, but it was a double cab with 2WD and a four-cylinder. To get a well-equipped V6 Crew Cab with four-wheel drive (4WD) buyers will have to shell out at least $38,000. And that’s well before must-have options are tacked on. I drove a version of that high-end truck at the launch. It’s very nice, but it is also a lot of money.

In fact, a GMC Sierra 1500 with 4WD and a Crew Cab starts at around $39,000 — albeit with less equipment — and the Ram 1500 EcoDiesel Quad Cab, which actually gets better mileage, starts at $42,000. So why is the Canyon so damn expensive? Well, there are several issues. First is competition.

At the moment, the GMC Canyon and its partner in crime the Chevy Colorado are head and shoulders above the Nissan Frontier and the Toyota Tacoma, which are the only other options for mid-size truck buyers. That allows GMC to charge a premium in an already overpriced segment. The new Tacoma, being released later this year, may force GMC to drop price. Ram and Ford, though, have shown no interest in entering the segment, so limited competition will continue to inflate prices.

Thule Tire Chains ($170)
If you opt for two-wheel drive you may want to pack a pair of chains.

Cobra JumPack ($170)
Jump start all the dead batteries in your life, from automotive to tablet and phone.

What is more, GMC expects its customers to buy a mid-size truck because they actively want something smaller, rather than because of pricing. GMC envisions the Canyon customer as a city dweller who needs – or simply wants — a truck for recreational purposes … and doesn’t want to thread a dreadnaught-sized Sierra through the streets. The result is a pricing structure that reflects desire rather than need.

Lastly there is simple physics. If consumers want a truck that has a usable back seat and bed, there is only so much the manufacturer can do to keep size and cost down. This is evident on the Canyon, which, despite being narrower than the full-size Sierra, is only a few inches shorter when similarly set up. The reality is that mid-size just isn’t as small as it used to be.

Hope on the horizon

In the end, I am torn on the Canyon. For midsize truck buyers, the stylish and refined GMC is a massive step forward when compared to the competition. However, considering the price, it is hard to feel like consumers will be getting a deal.

Fortunately, there is something coming that may change the whole picture. GM has said that it plans to introduce a 2.8-liter light-duty diesel engine to the Canyon and Colorado in 2016. While this engine is likely to command a premium, it should dramatically improve both the truck’s efficiency and capability. This will give the Canyon lineup the push it really needs.