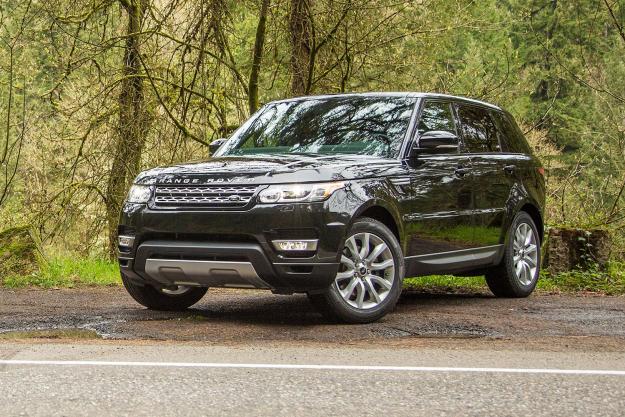 “Luxurious, powerful, capable, stylish, and relatively efficient, the 2014 Range Rover Sport takes the crown as the most well-rounded and all-round enjoyable vehicle in the full-size luxury 4x4 market.”

Update 12-5-14: This review originally covered the 2014 model of the Range Rover Sport V6, but the 2015 model is in showrooms now. The body and interior remain mostly unchanged, but you can view the new specifications below.

As I sit here trying to define Land Rover, the descriptors popping into my mind read like the horrid, lazy clichés of a bush-league Don Draper: “Land Rover is luxury. Land Rover is performance. Land Rover is uncompromised off-road capability.”

Try as I might, if I’m being honest with myself, clichés are all that feel fitting. “Land Rovers are just as at home in front of a red carpet as they are fording a South American river.”

And although it feels like something I’ve read in an ad in the back of a pandering luxury magazine, it’s true. Many automakers hold luxury, driving dynamism, and off-road capability at the heart of their brand identity. None execute it like Land Rover. And none of its vehicles better exemplify that core cliché than the 2014 Range Rover Sport.

When Land Rover introduced the Range Rover Sport model in 2005, it rode on the LR4 chassis, which meant it wasn’t really a Range Rover at all. Despite offering the same two big engines (a naturally aspirated 5.0-liter V8 and a supercharged 5.0-liter V8) as the line-topping Range Rover, it was still just an LR4 in a tight-fitting Rangie tuxedo.

Range Rover Sport has been given the full Range Rover steak and kidney pie treatment.

And in place of two V8s, it’s now powered by either a supercharged 3.0-liter V6 making 340 horsepower and 332 pound-feet of torque, or the aforementioned supercharged 5.0-liter V8, which makes 510 hp and 461 lb-ft. Both are backed by a new eight-speed automatic, which sends power to all four wheels through Land Rover’s unstoppable Terrain Response all-wheel drive system.

Although Land Rovers have been long known as fuel-sucking British earth tamers, the new Range Rover Sport features an intelligent start-stop system, which turns off the engine at stoplights. This allows the Sport to be both powerful on the go and relatively fuel-efficient around town.

Jeremy Clarkson of Top Gear once called the interior of the proper Range Rover the greatest interior on the planet. Delightfully, the Sport follows in the Rangie’s footsteps; its interior is that perfect blend cutting-edge British design mixed with sensible tech and restraint.

The main chunk of the dash is a single lump, covered in what looks to be manatee hide.

The dashboard is modular, and I just love the way it looks. The main chunk of the dash is a single lump, covered in what looks to be manatee hide. In the center is a porthole to the infotainment unit.

Many automakers struggle with the right amount of dashboard controls and buttons, from climate control to infotainment. Acura has far, far too many, and BMW has too few. I dare say, though, Land Rover has mastered the dashboard design dance.

The infotainment can be controlled by touchscreen or through a few well-positioned buttons. So, too, can the climate control. Further down the center stack, we find the gearshift and the Terrain Response 4×4 controls, which include General, Grass/Gravel/Snow, Mud/Ruts, Sand and Rock Crawl.

While the materials and layout of the Range Rover Sport interior are undeniably top tier, I do feel it skews toward the side of being overly antiseptic. The fit and finish is second to none, but it could use some warmer tones. A wood accent would go a long way here. Granted, this is a niggling concern, as the Sport’s interior is breathtaking and stout.

Besides being shared with a proper Range Rover, the Sport’s 3.0-liter supercharged V6 can also be found in the Jaguar F-TYPE. There, the V6 is a snarling, vicious thing. Under the hood of the much larger, heavier Sport, it’s a bit more subdued.

The Jag’s ear-shattering V6 scream has been – between the frame rails of the Sport – muted to a buzz stereotypical of most V6s. This stands in stark contrast to the sound that has defined the Land Rover brand for years now: the typically quiet, yet bass-y V8 tones of the naturally aspirated 5.0.

The driver still rides at the typical 10,000 feet, without feeling like the a tractor captain.

Delightfully, though, while a bit buzzy, the V6 moves the Sport in a serious way without consuming nearly as much gasoline as the engine it replaces. Usually when behind the wheel of Land Rovers, I saw fuel economy in the low teens. In the V6-powered Sport, I averaged 18 mpg – and, to be fair, I was quite throttle-happy with it.

Several factors play a part here: the downsized engine, the start-stop system, and the butter-smooth eight-speed automatic. Combined, the drivetrain proved incredibly powerful and efficient without the jitters normally associated with efficiency-seeking powertrains.

I know some of you might balk at 18 mpg. But in a car that can conquer landscapes better than a Jeep and also carry a family of five in top-end European luxury, 18 mpg is incredible.

Like the powertrain, everything about the Range Rover Sport driving experience is smooth. Handling, even for such a tall, heavy 4×4 is sharp and car-like, without sacrificing the truck-y aspects that make driving a Land Rover a treat. The driver still rides at the typical 10,000 feet of a Range Rover without feeling like a tractor captain.

Braking, too, is quick and confidence inspiring.

Oh, and for the purposes of this review, we’ll have to take the Range Rover Sport’s off-road capabilities as gospel, as I didn’t get a chance to crawl and rocks or traverse any rivers.

Off-road capable 4x4s used to be commonplace. In the modern, crossover-crazed world we now live in, they’re a thing of the past. Still, though, the Range Rover Sport has a few trucks vying for position of king of the luxury 4×4 mountain.

The two that I see as the Sport’s main competition are the Lexus GX 460 and the Mercedes-Benz G550. While both are luxurious and capable, they’re both relatively ancient.

The Sport, as we’ve discovered, is based upon Land Rover’s latest, stiff and lightweight aluminum architecture. In stark contrast, the GX is an old Land Cruiser Prado underneath, while the G550’s chassis dates back to the 1980s.

The GX is on par with the Sport’s driving dynamics, in terms of smoothness and refinement, but lacks the design panache of the Land Rover and the sporting intentions. The G550, on the other hand, drives like a squishy military truck.

The Range Rover Sport looks like a big, bossy full-size Range Rover, has the heart of a sports car, handles like a luxury sedan, and delicately sips fuel like the Queen at teatime.

If you’re wanting a luxury 4×4 that can literally do everything from date-night to the Dakar, you really only have one choice: The Range Rover Sport.

And I really hate saying that because it’s such a cliché. Thing is, though; I like clichés. And I like the Range Rover Sport.