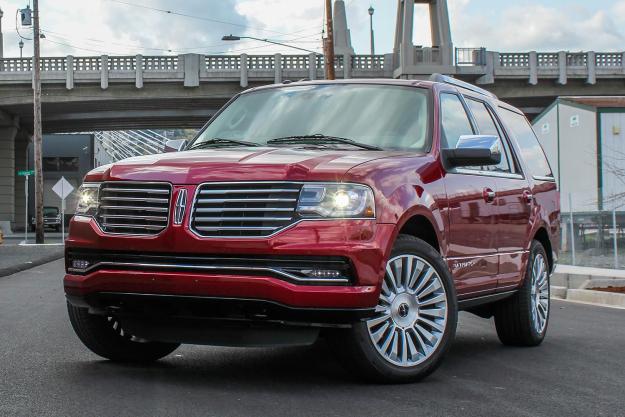 “The 2015 Lincoln Navigator is a relic of a bygone era, when gas-guzzling SUVs ruled the land. Lincoln has made some updates to its luxury truck for this year, but it may not be enough to make it a competitive choice.”

Picking up the Lincoln Navigator from the airport parking lot was a bit like going to the animal shelter and coming home with a Stegosaurus. Lincoln may be wowing the world, and rightly so, with its new Continental Concept. Its current flagship, however, with its elderly truck platform, boxcar dimensions, and drought-like thirst for petrochemicals is lodged solidly in the Jurassic … or at least the last Bush administration.

Exaggerations aside, Lincoln has made some updates to the Navigator for 2015, in response to the complete redesign of its chief rival, the Cadillac Escalade. These changes don’t bring it up to date, but they may be enough to deserve consideration from buyers who pine for the salad days of the full-size SUVs.

By far the biggest update to the 2015 Navigator is to the powertrain. The outgoing model was powered by Ford’s 5.4-liter V8 that put out 310 horsepower and 360 pound-feet of torque. Granted, these figures were respectable before the great recession. Now, though, they look decidedly weedy in a 6,150-pound truck. Thankfully, for 2015, the Navigator now gets a 3.5-liter EcoBoost V6, that courtesy — of twin turbos — puts out an impressive 380 hp and 460 angry torques.

This translates to a two-second improvement in its 0 to 60 time and a theoretically improved fuel economy of 17 mpg. In practice, I would be shocked to see the Navigator ever exceed an average of 15 mpg. During my week with the truck, I struggled to get more than 14 mpg. Reaffirming that, when it comes to EcoBoost, one can have Eco or Boost … but rarely both.

Thankfully, the power feels even more impressive than the specs would indicate. Despite having 40 fewer ponies than the Cadillac Escalade I drove recently, the Navigator actually seems to step out much quicker. The turbos require a quick gear change to get into the power band. Once there, the go is truly impressive in a vehicle that tips the scales at over 6,000 pounds.

Unfortunately, the Lincoln can’t stand up to the completely refreshed Cadillac when it comes to dynamics. The best that can be said of the Navigator’s ride and handling is that it is old-fashioned but competent.

In the corners, there is a startling amount of body roll, no doubt, aided by the simply massive 22-inch wheels. If you are foolish enough to take your eyes of the road, you can even monitor the precise amount of roll through the on-board “off-roading” sensors.

The ride is a bit better, especially on the highway, where the big Lincoln simply crushes pavement imperfections. When the road gets rough, things get worse. The Lincoln’s old-school truck chassis gets discomposed on ruts and bumps.

To the Navigator’s credit it is, at least, very easy to navigate. Despite its massive bulk, the Lincoln boasts both a tight turning circle and shockingly good outward visibility, thanks to large windows and a very high driving position.

Even with its flaws, and old-school truck-based character, the Navigator is good fun to drive. Its sheer bulk and old-school feel give the Lincoln charisma, as well as a somewhat unique place in the market.

The ride and handling aren’t the only things about the Lincoln that are a bit old-fashioned. The interior may get gloss wood trim and leather, but it is also littered with trim components that clearly make more sense on the Ford Expedition.

First the good stuff: nearly all of the trim and components that are specific to Lincoln are good. The seats don’t look all that special but they are comfortable and offer a wide array of adjustability, allowing everyone no matter their height and weight to find a good driving position.

The technology is also solid. The instrument cluster consists of a physical speedometer flanked by two TFT screens that can display a wide array of information. This system not only looks good, it is very useful. Lincoln’s re-skinned version of MyFord Touch is also worthy of praise. It is far easier to use and looks better than the beleaguered Cadillac CUE system.

Then there is the size; the Lincoln Navigator is large enough that you could probably play about nine holes of golf in the back of it. Seriously, I think the bus I took to school as a kid was smaller.

Unfortunately, all that size means there is plenty of space for cheap plastic trim and outdated fittings. The front row might get mostly nice Lincoln trim, but the back rows have to make do with acres of hard beige plastic and cheap fittings. Then there are issues like the exposed cables barely concealed behind the rearview mirror and poking out from underneath the seats.

These issues bring me to a broader set of concerns about build quality. The interior of my press demonstrator was littered with uneven panel gaps, poorly installed trim, and a few pieces of plastic that still had rough edges from the casting mold. Then there were the welds … a number of the visible welds — especially those around the rear hatch — were crumpled and appeared poorly sealed.

All of these issues are fairly minor, but the problem is that the Lincoln Navigator is a luxury car that starts at around $63,000. My press demonstrator was as near as makes no difference $74,000. At that price, a vehicle shouldn’t have those sorts of issues. It is possible, of course, that my demonstrator is an outlier. Still, though, these problems are … how to put this … the opposite of encouraging.

With all that extra power this may come in handy, so long as it is legal in your area. Read our review

Lots of people are going to want to see your Navigator, you may want to keep track of them. Read our review

Keep your Navigator sparkling with this complete kit.

In some ways, it’s hard to make the argument for the Lincoln Navigator: its old, expensive, and may not be very well put together. So why buy it, when there are alternatives like the Cadillac Escalade, and the Mercedes GL? The answer for many people may simply be: no reason. But, depending on customer needs and desires, there are some good arguments.

The Navigator has more interior room than just about anyone in the business. And, because of its old-school truck roots, it can tow just about anything short of a house – 9,000 pounds on rear-wheel drive models and 8,600 on 4×4 versions. It also manages to be bling, with its big wheels and massive grill — without being as aggressively vulgar as the Escalade.

For those who do want those things, the Navigator will reward them with its excellent powertrain and good tech package. Just don’t look to closely at the trim.