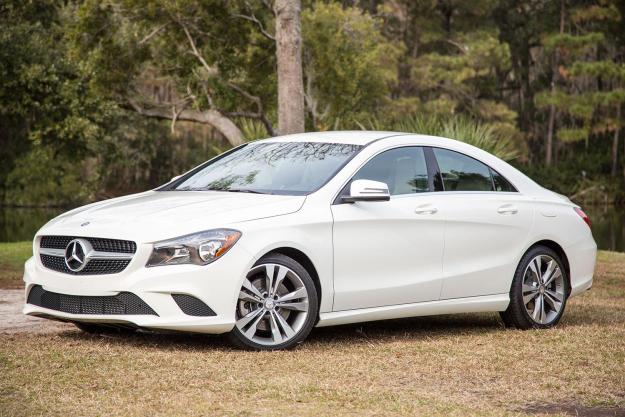 “For the money, the Mercedes-Benz CLA250 is one of the best bargains on the luxury market today. For those unconcerned with rear-wheel drive performance but keen to drive a luxury car, the CLA is a must-buy.”

Updated 12-10-14: This review originally covered the 2014 model year Mercedes-Benz CLA250. The 2015 model year of the Mercedes-Benz CLA250 is in showrooms now. Though no substantial changes were made to the body, engine, transmission, or design of the car, Mercedes did include a few interior updates for the 2015 edition. All of the changes are listed below.

“Do you like luxury?” Is the question that echoes in my head every time I climb into the cabin of the Mercedes-Benz CLA.

It’s the question posed by Will Farrell to Maya Rudolph in the “Luxury Spy” sketch from Saturday Night Live. Farrell slowly saunters up to a bar in a cream-colored suit – wearing an eye patch – and asks Maya Rudolph, in a lame British accent, “Do you like luxury?”

Although Farrell goes onto talk about his Jaguar being the “finest motorcar in the world,” the connection makes sense. By building the CLA, Mercedes has effectively looked to Generation Y, the “Millennials”, and asked, “Do you like luxury?”

And as a member of the Millennial generation, I can say that, “Yes, yes I certainly do.”

There’s no denying that the CLA is a wonderful thing to behold; it looks like a mini CLS-Class. Although its size is diminutive, it has huge presence. Unlike other entry-level luxury cars on the road, the CLA doesn’t fly under the radar.

There’s no denying that the CLA is a wonderful thing to behold; it looks like a mini CLS-Class.

Take the Acura ILX, which is effectively a Civic in a suit – and a major competitor of the CLA. It’s just sort of “blah.” If you didn’t look for the ILX, you’d never notice it. Which, to me, sort of misses the point of buying an entry-level luxury car.

Full-bore luxury can blend in, sure, but entry-level can’t. If you’re spending extra money for a compact car simply because it’s super nice or because of the logo on the grille, people better as hell notice it when you drive around. Otherwise, you might as well just get a Volkswagen Golf, pocket the $10,000 difference, and call it a day.

In this way, the CLA certainly succeeds. I had the opportunity to tool around Georgia last week in the CLA and it received attention everywhere I went. Mostly, people asked me what it was. They knew it was a Mercedes but thought it was a CLS … but knew it couldn’t be somehow.

Although my CLA tester was only $35,000, it attracted attention and admiration from passersby. So, in this way, it aced my first entry-level luxury test.

If you read my review of the CLA45 AMG, you’ll know that I thought its major downfall was the interior. For around $50,000, it just felt way too cheap.

Imagine my surprise, then, when I found myself loving the interior of the CLA250 – after Mercedes knocked $15,000 off the price.

With other cars, I have been immediately enamored with an interior. After several miles, I find my admiration waning. Eventually creaks, rattles, and uncomfortable seating outweigh the momentary honeymoon period.

I drove the CLA for over 600 miles through Georgia and found myself growing more and more impressed with the thing as the miles ticked by.

The dash is gorgeous to behold – especially with the dark wood trim. I love the floating infotainment screen and the retro-style round air vents. Everything is laid out intuitively and feels remarkably sturdy and well crafted.

The front seats are shaped into a single piece, without a separate headrest. I assumed that the seats, although great to look at, would leave me sore after any extended driving. Impressively, they remained comfortable during the four plus hours between Atlanta and Savannah.

The interior is quiet and unquestionably luxurious. It isn’t just a cheap version of a Mercedes interior. It’s a next-gen Mercedes interior for cheap. Frankly, I almost feel bad for folks who will buy the 2015 C-Class because it’ll be just as nice for a lot more money.

Although I love the looks of the CLA, it’s the front-wheel drive powertrain configuration that concerned me.

Front-wheel drive Mercs are commonplace around the globe. The CLA, though, marks the first front-driver to ever reach American soil. So it had to really prove itself.

I’ll preface my drive opinion here by saying that I simply do not like front-wheel drive cars.

I know there are probably plenty of you who will bend over backwards to defend your MazdaSpeed3 or your souped-up VW GTI, saying that it’s better in the snow than rear-wheel, it’s simpler, etc.

That said; the CLA isn’t vegan cheese. But it’s not full-fat milk either.

Throttle response from the 208 horsepower turbocharged 2.0-liter four-cylinder is adequate. The front-drive CLA250 will do 0 to 60 mph in 6.9 seconds and the forthcoming (yet to be released) CLA250 4MATIC with all-wheel drive will do it in 6.8 seconds.

Off the line, the CLA250 feels a bit unsure of itself. It feels like the transaxle – the part that routes power to the wheels – doesn’t know what it should be doing. The light changes, I push on the gas, there’s a bit of hesitation, power engages, and the car seems to wiggle a bit. The car doesn’t actually shake but you get that sensation that the drivetrain is hemming and hawing, debating how it wants to move forward.

I promise, though, that the vast, vast majority of buyers will never notice what I am talking about. If they did, no one would buy front wheel drive. And yet, front-drivers sell quite well.

Once power is to the road, the CLA glides confidently. It’s not a rocketship – even in Sport mode. You can tell that Mercedes engineers either tuned it for fuel-efficiency or for smoothness … or perhaps both. Regardless, if you’re hoping for the effortless power that you’ll find in every other Mercedes on sale in America today, you’ll be disappointed.

The CLA250 isn’t a driver’s car. It’s a car for those who aspire to one day relinquish the steering wheel and climb into the backseat, and pay someone to drive for them. In this way, too, it has succeeded.

Looks aside, I was really worried about the CLA. I worried that Mercedes might have sold itself short in order to appeal to a younger generation, oversimplifying a winning recipe.

And while I have my niggling complaints with the drivetrain, if someone is simply looking for a spot of compact luxury with a big ol’ Mercedes tri-star on the grille, the CLA is a knockout.

Before I drove the CLA250, entry-level luxury never made sense to me. It always felt like carmakers were asking buyers to pay for something they ultimately didn’t actually get. If you can get out of the dealership with a CLA for under $37,000, there’s almost no reason not to get it.