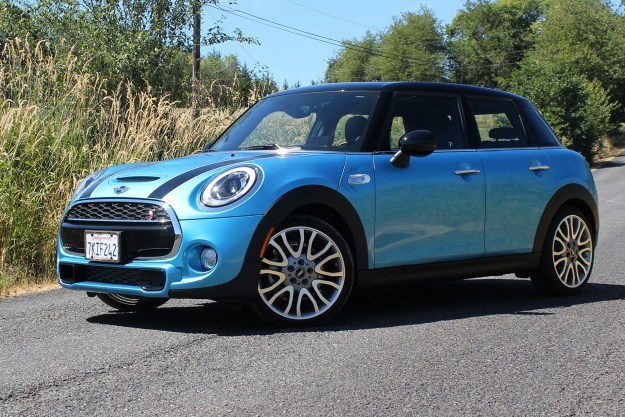 “The Mini Cooper S is a go-kart disguised as a daily driver, with all the fun and impractical implications that come with it.”

It’s hard to call the Mini Cooper S four-door a car. Sure it looks like a car, with wheels, an engine, and even four(!) seats. The Mini can even do all of the things you might expect a car to do, like transport humans and their various possessions from place to place but calling the Mini a car is missing the point, really. It’s a toy for grownups; and before I am deluged with angry comments, that’s not a bad thing.

As with most cars not made by Honda or Toyota, the Mini is about much more than just practicality. The difference is that, where other cars make pretenses that they are practical or dignified, the Mini is all about fun, and remember: this car was made by Germans, so that is really saying something.

The Mini Cooper S’s power and acceleration figures don’t jump off the page, but that hides some truly sublime qualities.

For starters, there is the 2.0-liter turbocharged firecracker under the bonnet. The little four cylinder may push out only a 189 horsepower, but the 207 pound feet of torque in the small Mini feel like they came out of a Dodge Hellcat. Mated to a six-speed automatic, this package will push the Mini Cooper S to sixty in 6.2 seconds.

Still, probably the best thing in the Mini’s performance arsenal is the steering. For starters, it is racecar quick, with a mere 2.5 turns to lock. It also has some of the best feedback and loading of any electric power steering systems I have used. The result is that, despite being only marginally smaller than a Golf GTI, the Mini Cooper S feels like a racing go-kart half the VW ‘s size.

On back-roads, this makes the Mini more fun than 3.2 barrels of monkeys. The problem is that the Mini just can’t give up on the go-kart impression even on the daily commute. The incredibly stiff suspension and chassis that make the Cooper S take corners flat and level create a bone jarring ride on uneven urban pavement, and the fast steering creates jittery movements and transient responses. In a less-than-practical sports car like the Alfa Romeo 4C, these sorts of flaws would just be a cost of doing business, but in a fashionable city runabout, the sporting character seems frankly a bit extreme.

All about that Bass

The interior and styling of the Mini Cooper are as extreme as its driving characteristics. Short of cars made by insane companies like Pagani, the Mini Cooper has just about the most styled interior you can find. There is the standard collection of retro touches, including round gauges and the massive round infotainment cluster, and more toggle switches than you can shake a vintage stick at.

It’s a toy for grownups- and that’s not a bad thing.

There is more than just kitsch to the interior. The designers, seem to have a 1958-inspired mentality when it comes ot the interior LED lighting. Everything in the inside has lights on it – the door sills, the infotainment screen bezel, the footwell – everything. In fact, the interior of the cabin is so bright as to be a hassle during night driving. I found my night vision was instantly cooked if I looked away from the windshield.

Still, I can’t say that I dislike the interior. Its aggressive styling may be a turnoff for some, but for a car that is made or broken on how it looks and feels, the cabin had to be extreme. Fortunately, unlike some other extreme vehicles the Mini Cooper’s interior is at least made of quality materials and very well put together.

A fact that is highlighted by the earth trembling, bone pulverizing, car alarm activating stereo. The epic Meridian-sourced stereo may be capable of setting off more seismographs than a stadium full of drunk Seahawks fans, but the interior holds up without so much as a rattle or squeak.

Don’t think that this means that you will be able to share your massive speakers with more than one of your friends, because any adult with a complete set of limbs will never manage to squeeze in the back seat.

Cobra Radar Detector ($165)
Keep yourself out of trouble… so long as radar detectors are legal in that area.

Those crowded back seats bring me back to my original point, namely that the Mini Cooper, even in its four door guise isn’t really a car. After all, it is tempting to compare the Mini to something like a Golf GTI and wonder why you are getting less car for significantly more money.

This kind of comparison isn’t fair, because the Golf GTI wants to be a car, and the Mini wants to be a fashion item. After all, a reusable grocery bag is larger and more durable than Coach handbag, but we all understand why the handbag costs more.
Like that handbag, the Mini nominally has a practical purpose, but really the reason to buy it is that almost entirely divorced from it. This might limit the people who would consider buying a Mini, but the people who will are going to appreciate every last LED light and vintage line. Looking at it that way, it’s almost a good deal.