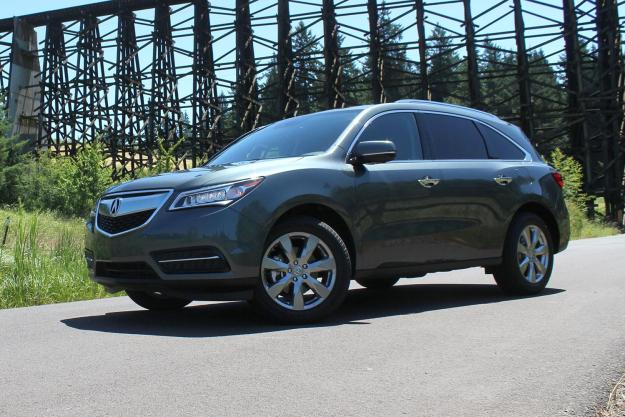 “The Acura MDX checks nearly all the right boxes, but when compared to other luxury SUVs it lacks both panache and charisma.”

Welcome to Acura’s best-selling model, the MDX. This luxury crossover may be the vehicle of choice for dentists, parents and realtors the world over, but that shouldn’t throw off an enthusiast. For those brave souls doomed to forgo sedans and two-seaters in favor of seven seats, the MDX offers a glimmer of excitement thanks to its V6 powertrain, and Super Handling All-Wheel Drive.

The rest of the car can’t live up to this heart thumping promise, unfortunately. But remember, it’s an Acura, meaning that thanks to its fancy Honda DNA, it is a spacious, comfortable, and exceedingly well built way to get from point A to point B.

The last several years have marked something of an identity crisis at Acura. The products have been good, if not always spectacular, but they have lacked anything that differentiates them from the competition — in particular their luxury segment foes at Lexus. The MDX is a different story. It may not outshine Lexus on design, but it definitely stands out from its Japanese competitor on performance.

The performance starts with a 3.5-liter single overhead cam (SOHC) V6. This engine may have started life in various Honda crossovers and minivans, but the Acura brain trust has gotten the most out of it possible, fettling it up to 290 horsepower and 267 pound feet of torque. In a vehicle as big as the MDX this might seem like barely enough juice, but for 2016 Acura has introduced a nine-speed automatic.

I didn’t much care for this transmission in the TLX, where I found the nine-speed box staggering between indecision and overt aggression. I have some of the same problems when the transmission is placed in its most aggressive Sport+ setting. This is really only suitable for absolute hoonage, as the transmission will under no circumstances change gear until redline. However, when left to its own devices the nine-speed box in the MDX is pure pleasure, offering silky smooth shifts and ever present torque.

It seems possible to play a solid game of tennis between the cargo area and the front row.

Still, the real performance story comes from Acura’s Super Handling All-Wheel Drive or SH-AWD. This system combines torque vectoring, stability, and traction control to produce nothing short of witchcraft. Throw the big MDX into a corner hard and the grip is just stunning.

Again in the TLX, I had problems with this system as I felt that it neutered steering feel, and didn’t give the driver much sense of involvement, but in the bigger vehicle it is a blast. During my week with the MDX I found myself constantly shocked at the crossover’s handling. It won’t out-corner a BMW X5 or a Range Rover Sport, but when compared to other premium crossover vehicles the MDX looks like a racecar in disguise.

The nice thing is that when you are done pretending to be an F1 Pacecar, you can slot the MDX back into comfort mode and let it do its best Honda Pilot impression.

Speaking of the Honda Pilot, comfort isn’t the only place where the MDX apes its downmarket brother. The interior has some wonderful touches, but it also lacks the sense of class and flash that its luxury market position would seem to demand.

On the good side the materials are of the highest quality from top to bottom, with lovely leather on the seats, and some nice aluminum trim. Unfortunately aside from a few upmarket details, like the fancy-shmancy button shifter and massive rear seat entertainment screen (which is optional), there is little in the interior that tells you you are in a luxury vehicle.

The center stack may have two screens, but the AcuraLink infotainment system is decidedly clunky and user unfriendly. Besides, not one of the buttons or components looks like it couldn’t be found in a mid-range Honda or Toyota.

This is a big problem when compared to the downright impressive interiors on the new Audi Q7 and the Volvo XC90.

When compared to other premium crossover vehicles the MDX looks like a racecar in disguise.

Acura can still hang its hat on practicality. The MDX may be fairly light and compact from the outside, but the inside is positively cavernous. The third row seats are a bit cramped for adults, but it seems possible to play a solid game of tennis between the cargo area and the front row.

Then there’s the matter of the price; while it’s easily possible to spend nearly $60,000 on an MDX, my press demonstrator cost around $58,000, and a decently equipped all-wheel drive model can be found for as little as $46,000.

That may not be chump change, but it is a whole Honda Fit less than a similarly equipped BMW X5.

The Acura MDX is undeniably a good vehicle, and I very much doubt that any buyers will live to regret their choice of luxury crossover. But by that same token, the MDX is not especially exciting or dramatic, leaving the enthusiast in me a little cold. The bigger problem is that the MDX doesn’t always live up to the luxury billing.

Yet for those looking to enjoy upmarket perks wrapped in an innocuous package, the MDX is a very tempting choice.