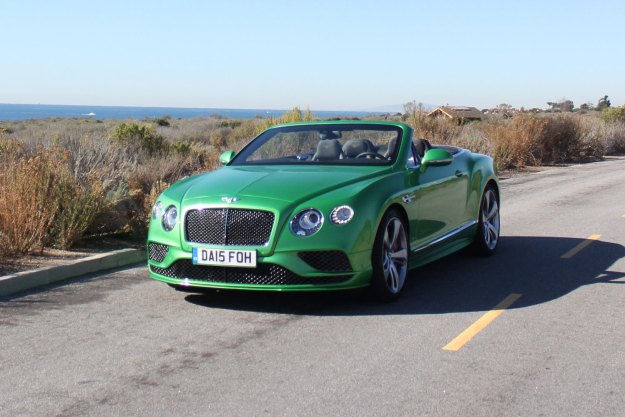 “Grand touring doesn’t get much better than the 2016 Bentley Continental GTC Speed.”

Recalling how radiantly green the car is, I decide not to play chicken with a yellow light as I approach the intersection. With a faint squeal from the Continental GTC Speed’s carbon ceramic brakes, the grand tourer creeps to a stop before being joined by a white Scion tC to the right.

Soon after, my peripheral vision catches a gabbing mouth and waving hand coming from just beyond the passenger side window. Turning my head in that direction, I meet eyes with an attractive blonde woman who’s attempting to communicate – she’s obviously unaware of the Bentley’s double-pane windows. With an eyebrow raised, I lower the glass.

Immediately she begins to sing along with the radio, as if never having beckoned my attention.

Mildly annoyed, I reach for the window control, but before the glass has raised more than two inches, she blurts out, “wait!” Without hesitation, she pivots towards her passenger seat and begins to rummage for something. Seconds later, she’s holding up a business card. “Here,” she exclaims, before flinging a card in my direction.

Poorly aimed, the card sails over the Bentley’s fabric roof. As I stare on incredulously, the woman has quickly discovered a spare card, which she promptly launches low into the side of the car. Without the slightest sign of discouragement, the damsel has unearthed a third card, which doesn’t fare any better than its predecessors at the presumed task of making it into the now vulnerable car.

At this point, she peers out her window at the fallen instruments before swiftly unbuckling her seatbelt, opening the door, and moving to grab one off the pavement. Unable to look away, I watch as she joyfully recovers a card before flicking it through the GTC’s window.

Meanwhile, the stoplight is ready for the next cycle. Jaw still slightly agape, I shift my attention forward and right foot to the accelerator, leaving the Scion, its driver, and a line of cars behind them.

Though I won’t be calling Ms. Wilson, nutritional coach, I really should thank her for adequately summing up what to expect with the 2016 Bentley Continental GTC Speed.

Though I didn’t have the chance to obtain a third party’s perspective of a near-$300,000 Candy Apple Green convertible navigating southern California traffic, I have to imagine it’s a bit like watching a Technicolor Dorothy emerge from a black-and-white house. Already one of the most robust designs on the road, when the GTC Speed dons its vibrantly vert suit, few vehicles can compete for attention.

Once the eyes adjust, however, the Continental reveals a gorgeous figure. Though it’s approaching its 13th year in production, Bentley’s progressive styling tweaks to the Continental GT’s figure not only keep it relevant, they make it look better than ever.

With headlight designs inspired by the EXP10 Speed 6 concept, a more handsome front and rear fascia, and razor sharp hip creases, the 2016 GTC Speed is a rolling icon that uses size to its aesthetic advantage.

Hurried pictures, bulging eyes, and pointing fingers became business as usual when piloting the GT around town, but it was difficult to discern how much of the attention came from the dazzling color alone. Matched with massive, bright red brake calipers inside equally substantial wheels, the GTC is as imposing to pedestrians as a 787 Dreamliner to a Cessna.

Did you say something?

Life inside the 2016 Bentley Continental GTC Speed is a lot like settling into the most luxurious World War II bunker imaginable. The outside world may be going to hell, but what do you care? You’re cocooned in quilted leather, brushed aluminum, and indulgent Alcantara. Only a soft ‘whoosh’ penetrates the reinforced cockpit as you speed along. You can’t distinguish screams from laughter, but boy does that massaging seat feel good.

The Bentley Continental GTC is as imposing to pedestrians as a 787 Dreamliner to a Cessna.

Of course the “C” in “GTC” designates this particular model as a convertible, making its coffin-like noise reduction characteristics even more impressive. One side-effect of such a thick folding fabric roof is that it takes more steps than an AA program to store the top. Fortunately, all the car asks of you (besides patience) to perform its transformation is the toggling of a switch.

Once you’ve finished fondling every lush surface in the cabin, including the bezeled gear selector, you might want to listen to music via the high-quality Naim speaker system. Unfortunately, the GTC’s infotainment system appears dead-set on ruining your plans. Once the seemingly endless period of “system starting” messaging has disappeared from the black screen, good luck navigating its clunky interface. With low-quality screen resolution, confusing controls, and sluggish response, the system begs for a replacement (hopefully via Volkswagen’s stellar Modular Infotainment Platform II).

As the massive powertrain roars to life, it reveals the bruiser’s speed-craving nature. There may be 5,500 pounds to move, but all that mass has no trouble bursting to 60 mph from a standstill in 4.1 seconds or surging on to a top speed of 203 mph (or 205 mph for the coupe). The engine can’t take all the credit, though, as Bentley’s ZF eight-speed gearbox and all-wheel drive system parlay that power into usable performance.

Unlike rear-wheel driven high-horsepower models, which default to spin their tires in a vain effort to secure grip, the GTC Speed instantly seeks motion. When you realize that what feels like 70 is actually instant-impound speed, feel free to place confidence in the GTC Speed’s Olympic-level Carbon-Silicon-Carbide brakes. And should you stumble upon a twisty road, the adaptive suspension damping can be tightened to restrain body roll, but mild understeer is unavoidable.

While Bentley’s fresh W12 is equipped with independent cylinder deactivation, it’s best to embrace the fact that you’ll be churning through that 24-gallon tank most expeditiously. In fact, I recommend leaving the drivetrain in “Sport” to appreciate the deeper exhaust rumble, and satisfying overrun. Gas is cheap, and you can’t be to buy this car, so live a little.

Bentley Parking Only Sign ($10)
I mean how can you not hang this in your driveway, garage, or work parking lot?

Obviously, attractive women desperately try to give me their numbers on a daily basis, but there’s something about how magnetically the GT draws fanfare. Wherever you’re going, you’ve “arrived,” and whoever you are by the time you get there, you’re “someone.” No, I’m not on an artificial self-esteem high, I’m merely astounded at how a vehicle can so effortlessly stir a mixture of jealousy, disgust, and admiration from the general populous. It’s almost worth the sticker price just to witness the social experiment…almost.

If Bentley pegged the Continental as a commuter car, or track monster, or utility vehicle, I’d happily lambast them. But there isn’t a modicum of doubt as to this vehicle’s intentions. Grand touring doesn’t get much better than the 2016 Continental GT.