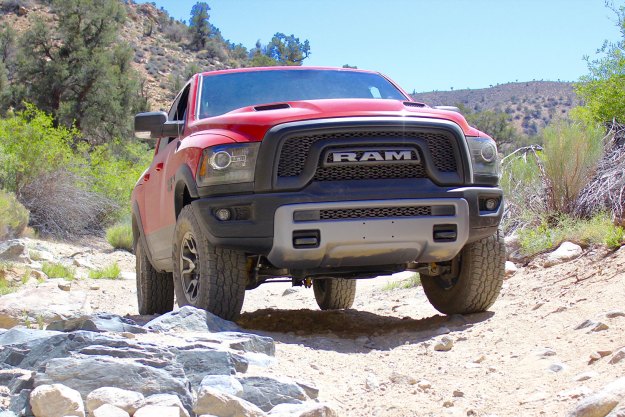 “Plush yet effortlessly capable, the Ram 1500 Rebel is a hooligan's best friend.”

There are a few different ways to evaluate a truck that touts off-road credentials, but comparing hardware or build quality or legacy doesn’t quite communicate a rig’s true mettle. Sometimes you just have to go get the darn thing dirty, uncomfortable, and far removed from urban terrain to adequately evaluate its out-of-the-box capability. That’s why I took the 2016 RAM 1500 Rebel to Southern California’s mountains and desert to put the bruiser in action.

With its distinctive face, all-terrain tires and boastful badging, it’s easy to mistake the RAM Rebel for a Ford F-150 Raptor rival, but in truth the packaging is quite different. Yes, the Rebel uses an exclusive air suspension with four different ride heights, the highest of which sits 1.0-inch taller than the standard RAM 1500. Yes, the Rebel rides on 33.0-inch tires and utilizes underbody skid plates. Yes, it has a 3.92 axle ratio and produces 396 horsepower and 410 pound-feet of torque from a 5.7-liter HEMI V8. But…and it’s a big but…the Rebel was primarily designed to be an aesthetic departure from the rest of the RAM lineup while the Raptor is only loosely related to its donor F-150 platform.

“Offering an off-road-style package on the Ram 1500 has been on our to-do list for some time, but the right combination didn’t present itself until now,” said RAM Trucks CEO Bob Hegbloom at the Rebel’s reveal. See, it’s that whole “off-road style” bit that alludes to the vehicle’s purpose. You can option the RAM Rebel to the F-150 Raptor’s price point, but that doesn’t mean it will transform into a competitive pre-runner.

Long-winded disclaimer aside, I set about finding how capable a beefed up RAM 1500 could be – and in the process developed abounding respect for the Rebel.

While the Rebel may not be a significant departure from the standard RAM line, that fact works in the truck’s favor when it comes to ride quality, cabin refinement, and interior volume.

Though the Rebel fills every inch of room between the lines of a parking spot, it’s remarkably painless to place the rig between them.

It’s hard not to feel spoiled riding in the Rebel’s cockpit. If you’re sitting up front, Chrysler’s UConnect infotainment system is a treat to operate with impressive features baked into a dead-simple module. If instead you find yourself in the rear seats, it’s like a test to see how well you can spread out among 40.3 inches of legroom. Should you somehow manage to load up the 125.3 cubic feet of interior space, including a pair of cubbies under the rear seats, the Rebel’s optional weatherproof, lighted, lockable Ram Boxes eat up additional cargo.

Before the road became rough, I was able to evaluate the Rebel’s suburban demeanor. In short, daily driving this truck would be a breeze. Thanks to the Rebel’s adaptive air suspension – which automatically lowers to an “aerodynamic ride height” at speed – plus a smooth, communicative steering rack, the only clue that you’re piloting anything other than a standard RAM is a faint drone from its oversized tires. Additionally, the Rebel’s large windows and minimal blind spots (aided by a backup camera) make the massive truck feel shrunken on the road. Though the Rebel fills every inch of room between the lines of a parking spot, it’s astoundingly painless to place the rig between them.

RAM’s Rebel can be optioned with either a 3.0-liter Ecodiesel V6 making 240hp and 420 lb-ft of torque or the aforementioned HEMI V8. Should frugality be of more interest than a kick-ass sound and gobs of power, the Ecodiesel paired with the eight-speed automatic transmission will return up to 25 mpg on the highway – but even the meatier V8 powertrain averages 22 highway mpg. I didn’t really come close to that figure during my time in the driver’s seat, but HEMIs just seem to bring out the hooligan in me, so don’t count my tests as standardized.

The stage was set: after loading up at the crack of dawn, myself and a few adventure-seeking peers would tackle a moderately challenging off-road trail in Big Bear before heading for a dry lake bed in Lucerne Valley.

The first several miles off-tarmac only required two-wheel drive, giving my passengers and I a chance to gauge the Rebel’s ride quality on coarse terrain at the air suspension’s normal height. Though not quite as plush as Toyota’s TRD series trucks, the RAM gracefully progressed along the trail at modest speeds without transferring bumps to the cabin. With greater speed, the truck settled further, demonstrating the damper’s rapid rebound and improving the ride comfort. Though I’d disengaged the traction control, the Toyo Open Country tires gripped loose dirt and slippery rocks impressively under acceleration and braking.

As our route transitioned from a fire road to a series of steeper hills and larger boulders, I paused to lift the suspension, engage four-wheel drive, and plot my path with more care. While for some off-road vehicles, this transition would be more dramatic, the Rebel merely felt more sure-footed. Continual smoothness and driving ease traversed our group across small and large obstacles alike. Though there were moments when I was sure the Rebel lacked sufficient clearance, or would get bogged down in deep sand, it effortlessly rumbled along like a container ship over mild waters. The same nimble handling I’d experienced in tight parking lots also allowed me to confidently squeeze the Rebel through narrow rock corridors.

In a moment of juvenile curiosity, I spotted a set of steep mounds and hatched the idea to mount them for a few impressive photos. Without hesitation, the RAM crawled up the loose dirt and perched atop the slope as a king surveying his domain. Without a locking differential, the Rebel would likely struggle to climb a larger, similarly steep ridge, but our journey didn’t afford any opportunities to test my theory.

After emerging from the oscillating mountain terrain, our group scurried to the dry lakebed, eager to let the RAM’s sizable powertrain suck in mouthfuls of air at higher speeds. With three miles of abandoned, cracked earth between each end of the lake, the Rebel surged forward, ushering a rooster tail of dust behind it. I’d love to convince you that my shenanigans were merely for pragmatic evaluation, but I was having entirely too much fun for that to be true. Still, the desert runs exposed the Rebel’s propensity for speed, characterized by the same stability that I’d noted over jagged ground.

After hours at the helm of RAM’s burliest light-duty pickup, I was sure of one thing: the Rebel may be a styling package with a fancy suspension, but because it’s based on an incredible platform, it just works. Not only does the Rebel offer the same great cabin, ride quality, and interior volume as the standard 1500, it pitches in just enough rugged aesthetic to encourage owners to tackle terrain that a normal RAM could probably handle anyway.