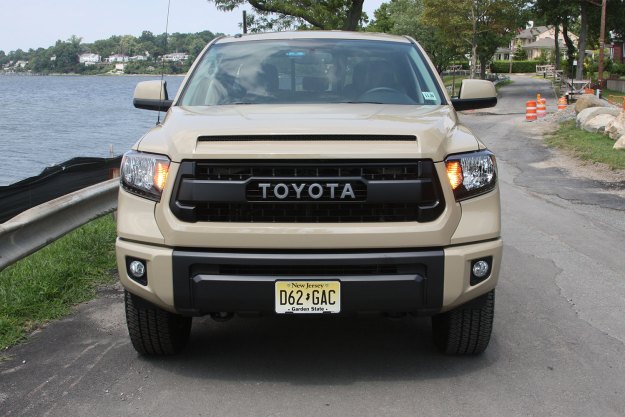 “Wherever you need to go, the capable Tundra TRD Pro will get you there with a smile.”

When Toyota invited me to a NASCAR race at the historic Watkins Glen track, the world’s largest automaker also offered me a choice of vehicles for the 300-mile drive. My eyes locked onto the one near the bottom of the list: Tundra TRD Pro. TRD is short for Toyota Racing Development, the in-house performance development arm for Toyota and Lexus. What could be more fitting than arriving at a NASCAR race in a big ol’ pickup truck? And one made in Toyota’s San Antonio, Texas plant at that.

The TRD Pro adds two inches of lift up front over the base model Tundra. My tester’s Double Cab configuration meant this truck had a longer bed, whereas the Crew Max offers extra room in the back seat. It was clad in a Quicksand paint scheme, a color that harkens back to the venerable FJ40’s Dune Beige.

The TRD Pro line launched in the U.S. for the 2015 model year, with the trim on offer in the Tundra, Tacoma, and 4Runner lines. Various performance and visual upgrades, normally offered piecemeal or in other off-road packages, are brought together and expanded upon. When compared with the base SR, the Tundra TRD Pro features front and rear Bilstein shocks with external remote reservoirs, upgraded rear sway bar, and an aluminum skid plate under the oil pan. The truck rides on 18-inch alloy wheels and 32-inch Michelin tires. Stainless steel exhaust pipes peek out from behind each rear wheel.

Visually, the TRD Pro wants you to know that it is no ordinary Tundra. Matte black trim and a massive “TOYOTA” logo lend to an imposing front end, which also sports standard fog lights and a (nonfunctional) hood scoop. The bedside is stamped with a TRD Logo, and all other badging is finished in black.

The TRD exhaust produces a rich, throaty growl that grows to a roar at higher revs.

The TRD name graces the interior as well, on the leather-trimmed seats, shift knob, and floor mats (I counted over 20 examples of TRD badging inside and out). Entune audio and navigation are standard, along with a 7-inch touchscreen. A CD player, auxiliary jack, and Bluetooth make it easy to listen to your favorite tunes through the standard seven speakers.

The TRD Pro is powered by Toyota’s 5.7-liter i-Force V8, which produces 381 horsepower and 401 pound-feet of torque. It is mated to a six-speed automatic transmission with manual shifting and tow/haul modes. The TRD exhaust produces a rich, throaty growl that grows to a roar at higher revs.

Three-piece bumpers reduce the cost of repairs and an easy lower/lift tailgate won’t slam down upon opening. The Tundra is ready for the crew with wide-swinging doors, headrests designed to accommodate hardhats, and chunky buttons that are usable with heavy gloves. Each of the five passengers get their own cup holder and bottle holder, and there are extra compartments for more. You can stow your stuff under the rear seat, though this only applies to the Double Cab configuration.

The truck is docile enough through town, and acceleration is kept in check by the traction control if you aren’t smooth on the throttle. You feel the bumps, but the suspension also smooths them out. Deep potholes felt like cracks in the pavement and high curbs were toned down to subdued speed bumps. Why was I scaling curbs? I’ll answer that with another question: Who needs K-turns when you have 10.6 inches of ground clearance and generous approach/departure angles? When I did need to go in reverse, the standard backup camera was a huge help.

The drive upstate took me on some long, sweeping roads, and this is where the TRD Pro was able to stretch its legs. I was expecting a rougher ride but I was truly taken aback by the power delivery from that tremendous engine. The 5.7-liter V8 grumbled along at town speeds, but once I hit the freeway its snarls turned thunderous. No matter the RPM or speed, there always seemed to be more grunt. I had to check myself to avoid breaking the speed limit. This occurred frequently on my five-hour trip north, but I as eventually able to control myself, though in my spirited driving I completely forgot about the standard cruise control.

The TRD’s softish suspension combined with the long wheelbase meant I had a smooth ride. Handling was not too compromised and felt secure — steering was not as light as it is on other vehicles designed for more serious off-roading. Vented disc brakes (the same ones found on the standard Tundra) did an admirable job of slowing down and stopping the 5,740-lb. truck.

The drive upstate took me on some long, sweeping roads, and this is where the TRD Pro was able to stretch its legs.

The TRD Pro comes with a 38-gallon fuel tank, a nice step up from the standard 26.4 gallons found on other models. I averaged 14 mpg on regular fuel from combined city and highway driving, which is on the lower end for this class.

Syncing my iPhone to the Entune audio system was a simple process, and the navigation was intuitive. Audiophiles might want to upgrade the sound system — this truck was designed more around performance than comfort and luxury, though its spartan interior sports some nice materials.

I did note the lack of a driver’s side grab handle, which has led to many aftermarket modifications to add one on. My tester did not come with steps, and I had to use the steering wheel to hoist myself in.

At Watkins Glen, the TRD Pro drew attention from race fans, many of whom owned pickup trucks of various makes and models. Given Toyota’s popularity and success in NASCAR, the Tundra was welcomed onto the sacred grounds. Our 20,000 lb. convoy included a 4Runner and a couple of Tacomas, but the Tundra dwarfed them all. I was approached by numerous people who wanted to know everything about the truck. A police officer said he already had his on order in the same color.

I put close to a thousand miles on my Tundra TRD Pro over the long weekend and I was surprised by how comfortable it was. The lightly bolstered seats were supportive enough for me to forego any rest stops on my trip back to NYC, and they kept me in place when the pavement ran out. The chunky steering wheel’s big knuckles helped keep things straight on longer stretches of roads.

The mid-summer heat was no match for the powerful air conditioner, though I spent most of my time with the massive windows rolled down, enjoying the breeze from my high perch.

The Tundra TRD Pro is a no-frills utilitarian truck with some serious off-road capability for those who want to, or need to, go off the beaten path. It is a solid choice for those who will utilize its towing (9,800 lbs. max), hauling, and rough terrain capabilities.

Full-size pickup manufacturers such as Nissan, Chevrolet, GMC, Ford, and Ram all offer option packages that bolt on some off-road components, but the latter two also produce stand-alone models like the TRD Pro. Ford has its SVT Raptor, which is all-new for 2017, and Ram recently introduced the Rebel.

The Raptor uses Ford’s 3.5L V6 EcoBoost mated to a 10-speed transmission. Features that are standard on the TRD Pro, such as leather seats and a larger fuel tank, are optional on the Raptor. The Raptor also comes with some of its own standard features such as automatic start/stop, selectable drive modes, an electronic-locking rear differential, and hill descent control. The Raptor’s extras bring its starting MSRP to $48,235.

The Ram Rebel is more closely matched to the TRD Pro, at least in terms of price and features. With a starting MSRP of $45,200, the Rebel 4×4 is only available in crew trim. Standard equipment includes a 26-gallon fuel tank, air suspension, cloth seats, and a power rear window slider. The 5.7-Liter V8 Hemi is mated to an 8-speed automatic transmission, which you control via an electronic dial shift knob.

The Tundra TRD Pro is entering its third year of production with minimal changes. It is based on the second-generation Tundra, which has grown a little long in the tooth since its 2007 introduction. The question is whether or not Toyota will keep the TRD Pro in the mix when the next-gen Tundra debuts.

The Tundra TRD Pro sits on an aging but proven platform. No matter your preference, you can’t ignore Toyota’s legendary reliability record. You can step up to a truck with more features, updates, and perhaps a bit more capability, but you’re going to pay up for it.

My test model’s MSRP was $42,445, undercutting its main competition. The nameplate may be Japanese, but about 70 percent of the Tundra’s parts come from North America, making it one of the most American pickup trucks you can buy. And for some, that might be enough.