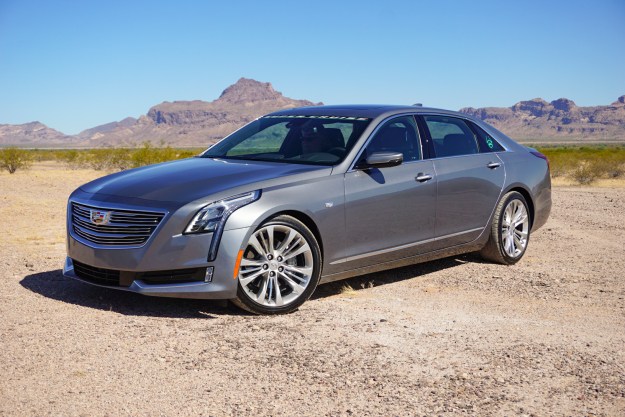 “Super Cruise autonomous drive in the 2018 Cadillac CT6 does exactly what Cadillac says it will do.”

Cadillac unveiled the full-size CT6 sedan at the 2015 New York Auto Show as a 2016 model year offering. It was a bold move back to a rear-wheel-drive (and all-wheel-drive) platform for Cadillac’s flagship model, and it showed where Cadillac President Johan de Nysschen is taking the brand. The CT6 has been successful for Cadillac in the first two years of production, and with one major exception the 2018 model year is a continuation of the launch model.

The big news with the 2018 CT6 is the introduction of Super Cruise – a limited self-driving feature that allows you to take your hands off the wheel entirely, under certain controlled conditions.

The first few moments with your hands off the wheel can be spooky, but after a few minutes you start to trust the car.

Those conditions are that all the automatic safety systems have to be on, including adaptive cruise control, and you have to be driving on an Interstate freeway. There are a few more asterisks and caveats, but that’s essentially it.

On our first drive, we took the CT6 about 800 miles from Santa Fe, New Mexico to Santa Monica, California. We did about 750 miles of that all-freeway trip under Super Cruise, and it works the way Cadillac says it works. The first few moments with your hands off the wheel can be spooky, but after a few minutes you start to trust the car. By the end of your first day on the road with Super Cruise, you’ll be thinking that every car should offer this tech.

The Cadillac CT6 comes with a long list of trim levels and options. The base CT6 comes with a turbocharged 2.0-liter engine rated at 265 horsepower and 295 pound-feet of torque, paired with an eight-speed automatic transmission and rear-wheel-drive for $55,090 out the door. You can upgrade to Luxury trim for about $5,000 more and get some more stuff, but not Super Cruise.

The CT6 has all of Cadillac’s latest bells and whistles, and they come standard when you’re playing at the level where you get Super Cruise. It’s got active rear-wheel steering, adaptive cruise control, night vision, forward and reverse automatic braking, surround view camera, and a really nice infotainment system. Take all that as given.

Cadillac sent out a bunch of specially-equipped cars and they mapped every mile of the U.S. and Canadian Interstate highway systems

The technological marvel in this car is the Super Cruise. Here’s how it works: Cadillac sent out a bunch of specially-equipped cars and they mapped every mile of the U.S. and Canadian Interstate highway systems. They used high-resolution GPS, cameras, and laser radar (LIDAR) to do it, and they logged every lane, every onramp and offramp, and every curve and notable feature over 160,000 miles of road. That’s now proprietary data that belongs to Cadillac, and the CT6 has access to that map.

Inside the CT6, you’ve got a LIDAR, front and rear cameras, and a GPS system capable of determining which lane you’re in on any Interstate highway in North America. The car combines the known map with what it perceives on the road ahead and manages your speed and steering accordingly. Super Cruise uses the adaptive cruise control to maintain following distance if traffic slows down, but with clear road it will travel at the speed you set, up to 85 mph.

The SAE definition of a Level 3 autonomous driving system is “The driving mode-specific performance by an Automated Driving System of all aspects of the dynamic driving task with the expectation that the human driver will respond appropriately to a request to intervene.” That’s what Super Cruise does, on the freeway, at least. The caveat that the human driver has to be ready to respond is critical, however.

The Cadillac system uses a camera mounted on the steering column to look at the driver while Super Cruise is engaged. The image is analyzed to determine whether you’re looking at the road, or at the infotainment system, or your phone, or if you’re taking a nap. If the system thinks you’re not paying attention to the road, the CT6 starts an escalating series of warnings to get your attention. If you don’t respond, eventually the system will activate the flashers, gently slow the car to a stop in your lane, and use OnStar to alert the authorities that you’re unconscious and need assistance. The system works very well, and you can’t get away with much lollygagging before it asks you to pay attention.

The attention system is more than just a legal requirement. The Super Cruise system is still sharply limited in what it does and does not do. For example, the system will not change lanes. If you’re in the right lane when you engage Super Cruise then the car stays in the right lane, no matter what. If you come up on a slow-moving vehicle, the CT6 slows down and follows. You have to take the wheel and change lanes, which disengages Super Cruise for a moment. But if everything is good, Super Cruise comes back on when you’re settled in the new lane.

Another thing is that Super Cruise relies on its image of the road ahead, and if for any reason that image becomes confused, the system will ask you to take the wheel. That can happen because of a pavement change, unclear lane markings, or for some other reason not apparent to you at the time. Super Cruise has more trouble with urban freeways than rural stretches, and it doesn’t respond at all to potential hazards like merging traffic. Super Cruise will hold its course and speed, but you need to be ready to make that quick lane change if another driver tries to merge into your car.

Super Cruise gave us the opportunity to take in the Cadillac’s creature comforts. The CT6 is really well made. It’s very comfortable and quiet inside. The main feature you want on a long drive is the massage function in the front seats. The massage system has 15 separate settings to customize your treatment. You just dial up a little seat heat, set the massage to your preferred style, and watch the scenery go by to keep the Super Cruise system satisfied. It’s a pretty good life.

Of course, the wood trim is nice and the 34-speaker Bose Panaray sound system gives you fantastic tunes. You can use the four-zone climate system and heat or ventilation in your seat to keep you perfectly comfortable. The steering wheel is heated, too, but you’re not holding it most of the time. If you’re riding in the back, you’ve got movie screens. In short, this car has everything you expect from a top-of-the-line Cadillac.

We tested the 3.0-liter twin-turbo V6 with AWD, and sure enough it’s got plenty of power, even though the CT6 weighs in at a hefty 4,399 pounds. You’ll get a 0 to 60 time right around five seconds flat, and a top speed somewhere over 150 mph. You would expect no less, right?

Super Cruise like a dancing frog. You can criticize the moves, but the amazing thing is that it dances at all.

In the Platinum trim, the CT6 comes with magnetic ride control, and you’ve got Touring, Sport, and Snow/Ice modes at your fingertips. Touring mode is super soft and you’ll float over any bumps in classic Cadillac style. It’s worth noting that bumps do not seem to disturb the Super Cruise system at all.

If you dial up Sport mode the magnetic system tightens everything up nicely. You’ll get a firm-but-smooth ride that will allow you to drive the CT6 like a very large AWD sport sedan. It’s still a full-size, but it’s not a grandpa car. So, you wouldn’t consider the CT6 as a candidate for a track day or autocross car, but it drives very nicely.

To be honest, we didn’t pay any attention to fuel economy. We were running through the desert at 75 mph enjoying the AC and the massage. The EPA says the 2018 CT6 with the turbo V6 gets 18 MPG city and 26 MPG highway, and that sounds about right.

Back to Super Cruise, from the driver’s seat, here’s what you see. When you fire up the CT6, adaptive cruise control is on by default. You drive around normally and you get on the freeway.

When you settle into your lane, the system displays a little steering wheel icon on the dash. That’s your signal that Super Cruise is available. Sometimes it goes on and off if you’re not in the middle of your lane. But when it’s on, you just press the Super Cruise button on the steering wheel to activate the system. It feels like the car drops into a groove in the middle of the lane, and then it stays there.

The steering wheel is worth describing. The top of the wheel is plastic, and has the ability to glow in different colors. The Super Cruise system uses this to tell you how it’s working. It will glow green when Super Cruise is engaged, or blink green when it needs your attention. The wheel glows blue when Super Cruise is ready to engage, and it glows or blinks red when something’s wrong and you need to take the wheel.

Little anomalies in Super Cruise turn up from time to time. When you’re in the left or middle lane and you pass a big truck on your right, the CT6 seems to cozy up towards the truck. It’s just an inch or so, but enough for you to notice. And if the lane widens to accommodate an upcoming off-ramp, the CT6 will try to center itself on the wider pavement, then it either goes back to its lane or asks for help when the off-ramp passes. But it sometimes feels like the car’s thinking about taking the off-ramp for you.

As you might expect, the CT6 has every active and passive safety device known to the automotive industry in 2018. Those safety devices combine to make the Super Cruise system possible, and it’s a window to the future of driving where the car is keeping a lookout even if you don’t.

Cadillac wouldn’t and couldn’t market the Super Cruise system without confidence that it’s safe. As a Level 3 system, the driver is still liable for where the car goes, and that’s likely to be the case for some time. At Level 4 autonomy, the automaker will be liable for crashes and that’s not a responsibility they’re going to take lightly.

The 2018 Cadillac CT6 is a really nice luxury and performance car. That’s a given. Super Cruise does exactly what Cadillac says that it does, and it’s a big step towards fully autonomous driving. Sure, you can point to limitations in the system, but Super Cruise is like a dancing frog. You can criticize the moves, but the amazing thing is that it dances at all.

The bottom line on the CT6 with Super Cruise is that if you spend a lot of time cruising on the rural Interstate, you’re going to love the self-driving feature. You can enjoy the scenery, get a massage, sip your latte, and crank up your tunes. It’ll cost you a lot of money this year, but we expect this system to migrate through Cadillac’s product line over the next few years, and the price will come down. Other automakers are working on similar tech, and we’ll likely see new developments coming along rapidly. It’s a brave new world that has such vehicles in it.