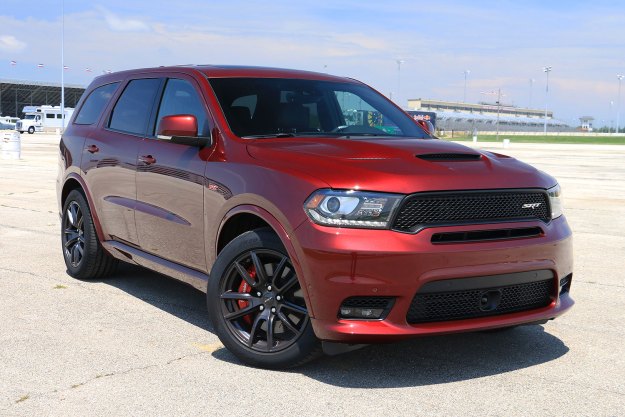 “Not only can it haul just about anything, Dodge's Durango SRT will get it there in a hurry.”

As Dodge looks to inject more performance into their lineup, the 6.4-liter Hemi V8, big Brembo brakes and other performance upgrades that have been used to great effect in the SRT Challenger and Charger (as well as the Jeep Grand Cherokee SRT) now find their way into the brand’s three-row SUV, the 2018 Dodge Durango SRT.

Few manufactures have made an earnest attempt to offer a high performance package for an SUV of this size, allowing the Durango SRT to enter the market essentially uncontested in the segment. The performance upgrades also provide an added benefit of bumping the Durango’s towing capacity to 8,700 pounds, which gives this SRT model best-in-class hauling among three-row SUVs.

“We look at this as our three-row Charger,” says Pete Jacobsen, Dodge’s vehicle development manager for the Durango SRT. “And like the Charger, it also has two distinct faces – one of a performance vehicle and the other as a family vehicle.”

Previously, the R/T model served as the top-spec Durango. Motivated by a 5.7-liter V8, it propelled the big SUV with reasonable haste, but it still lacked the guts to really be considered a performance model considering the sheer size of the vehicle it was tasked with moving, and the R/T brakes and suspension tuning further support that notion.

The SRT treatment changes the story though, not only yielding performance that makes the big all-wheel drive sport-utility behave much like its smaller Jeep Grand Cherokee SRT corporate brethren when driven in anger, but also providing towing capability that puts the three-row at the top of its class and improving its road manners overall.

While the mechanical upgrades are substantial, the visual tweaks are more subdued, and most onlookers probably won’t recognize this 475 horsepower SUV as anything beyond a typical family hauler at first glance.

Though the overall aesthetic doesn’t stray too far from the standard Durango, the SRT treatment does bring a handful of exterior tweaks to the table. These are most obvious at the front end, where a new hood with a functional scoop and dual heat extractors that’s similar to the other vehicles in the SRT lineup as well as a unique front fascia and lower valance add some visual flare and improve air flow into the engine bay. Widened fenders and body-color side rocker panels also on hand to enhance the muscularity of the Durango SRT’s silhouette.

Widened fenders and body-color side rocker panels also on hand to enhance the muscularity of the Durango SRT’s silhouette.

Along with a 6.4-liter, 475 horsepower V8 and an eight-speed automatic gearbox, the Durango SRT comes standard with an active exhaust system purposely tuned to give the SUV a Charger-like growl. Six-piston Brembo brakes are equipped up front while four piston units are installed in the rear, and an adaptive damping system provides drivers with three distinct settings to dial in the upgraded suspension’s firmness to one’s liking.

A new performance-tuned all-wheel drive system helps the Durango SRT deliver impressive sports car-caliber acceleration off the line, and can send up to 70 percent of engine torque to the rear wheels when the Track driving mode is selected.

FCA’s recently updated Uconnect infotainment tech is also on hand here. First seen on 2017 Charger, Challenger, and Chrysler 300, the fourth generation system continues to be one of the strongest offerings in the industry, and the 8.4-inch touchscreen system boasts updated visuals, a more responsive touchscreen, faster hardware, Apple CarPlay and Android Auto support, as well as downloadable apps and SiriusXM Travel Link and Traffic functionality. Supplementing the center stack touchscreen is a customizable 7-inch TFT digital gauge cluster with a 180 mph speedometer.

Durango SRT owners will also score a 506-watt sound system from BeatsAudio with nine speakers and a subwoofer, which ensures that they’ll still be able to hear their tunes over the roar of the big Hemi at wide open throttle.

Seven user-selectable SRT driving modes are available in this Durango, ranging from the performance-focused Sport and Track modes to the more utilitarian features of Snow, ECO, and Tow modes, the latter of which engages an active noise cancelation system to reduce the engine racket inherent to high-load towing. A Valet mode remaps the engine’s output to that of the V6 model and disables the vehicle’s performance tech, while Auto mode is the default comfort-focused setting when the vehicle is started.

Although the Durango SRT’s interior isn’t a complete rethinking versus the standard model, there are some notable enhancements on board, including a new flat-bottomed SRT steering wheel with paddle shifters, as well as heated and ventilated front seats with Napa leather and suede inserts as standard. An instrument panel and door bezels made of real-deal carbon fiber are also available, as is a Demonic Red Laguna leather interior with embossed SRT logos.

Since this the largest SUV in Dodge’s lineup the interior volume and seating capacity available in this three-row sport-utility are generous, providing seating for up to seven and 85 cubic feet of cargo space with the seats folded down.

The Durango SRT’s performance capability is a curious proposition. On one hand there’s simply no escaping the sheer heft and size of this big SUV, and despite the excellent performance hardware equipped here, most drivers aren’t likely to mistake this hauler for a sports car, as the weight it carries around is still regularly evident during aggressive maneuvering.

Most drivers aren’t likely to mistake this hauler for a sports car, as the weight it carries around is still regularly evident.

On the other hand, the fact that Dodge has managed to find a way to get a vehicle this size to deliver a mid-four second sprint from 0 to 60 miles per hour, as well as a stopping distance of 116 feet and excellent composure overall at well past triple-digit speeds is undoubtedly impressive.

As mentioned previously, its resemblance to the Jeep Grand Cherokee SRT is most evident in its behavior when driven spiritedly at speed, which is high praise considering the Grand Cherokee is a significantly smaller vehicle than the Durango. Lead foots who need a three tow SUV will find a lot to like about the Durango SRT, but it’s also important to keep one’s expectations in check, as SRT’s tuning is currently still bound by the laws of physics.

“Isn’t the future about electrified vehicles and antonymous driving?” pondered Tim Kuniskis, head of passenger car brands for FCA North America during the vehicle presentation. “We want folks to take a step back from MPGs and the weights and measures [and] Think about how these cars don’t fit in – they stand out.”

Although that statement might be thick with marketing sheen, there’s an undeniable truth to it. While you’re unlikely to see a Durango SRT at your next track day, this performance-tuned sport utility offers something that other three-row SUVs do not: Charisma.

That counts for a lot in the automotive industry, particularly when it comes to emotionally-driven purchases like performance vehicles. And there’s certainly an opportunity for Dodge to connect with customers who need practicality and seating capacity but would prefer not to be punished by a lackluster driving experience. In that regard, the Durango SRT is far more entertaining to drive than a three-row SUV has any right to be.

Looking past the performance metrics, this SRT-tuned Durango also makes a strong case for itself by virtue of the fact that it demands zero compromise in terms of livability versus the standard models, and FCA’s latest Uconnect system continues to score points on the infotainment front.

For those who’ve been longing for a dose of personality among their options for three-row SUVs, it’s undoubtedly a compelling choice. The Durango SRT will land in showrooms in the fourth quarter of 2017 with a starting price of $62,995.