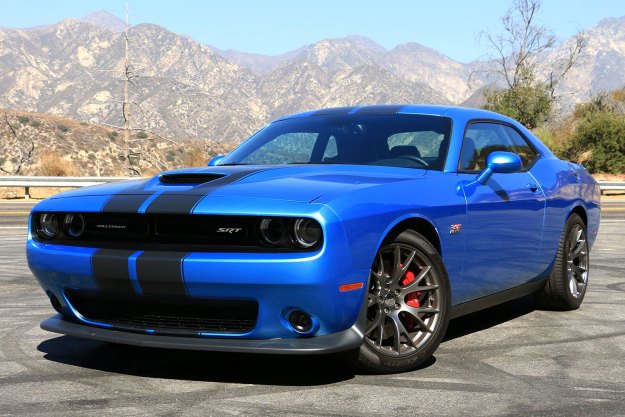 “Lighter than a Hellcat and packing a laundry list of standard content, the SRT 392 is a high-performance middle child that shouldn’t be overlooked.”

Between the fervor caused by the supercharged, 707-horsepower SRT Hellcat and the revelation that nearly 500 ponies can be had for less than $40k by opting for an R/T Scat Pack, the SRT 392 has become something of a neglected middle child in the Challenger lineup. It more or less splits the difference between the two in terms of features, looks, performance, and price. In our 2017 Dodge Challenger SRT 392 review, however, we found that instead of being too hot or too cold, the SRT is just right for the right buyer.

While the shadow of its boosted brethren looms large and the less expensive alternative offers identical power output, the SRT 392 is a compelling option in its own right, boasting the grip, braking, and similar suspension components to its top-spec SRT counterpart but with a noticeable amount of weight taken off of the front of the car and cost removed from the bottom line.

And although it shares a power plant with the Scat Pack model, the upgrades here go beyond standard equipment like the 900-watt audio system and leather seating. But is it worth the premium over the Scat Pack? And on the other end of spectrum, does the SRT 392 fall short of greatness simply because it’s not an SRT Hellcat? We grabbed the keys to our B5 Blue, six-speed manual transmission-equipped tester and hit the streets of Los Angeles to find out.

The 2015 refresh of the Challenger lineup created some convolution as a result of its model expansion. Both the R/T and SRT trim levels gained a new model whose configuration was substantially different from the other model it shared a badge with, and the news Challenger T/A adds another level of complexity when it comes to discerning what model gets what hardware.

For the SRT 392’s part, the most obvious element is the 392 cubic-inch, 6.4-liter naturally aspirated V8, which makes 485 hp and 470 pound-feet of torque. It is essentially identical to the 6.4-liter motor used in the R/T Scat Pack model, as indicated by its identical power output. And like the Scat Pack, the SRT 392 is available with a six-speed manual gearbox or an eight-speed automatic with paddle shifters. But the devil’s in the details when it comes to comparing these two. For instance, while the two cars offer six-speed manual transmissions, we noticed that the clutch resistance in the SRT model is similar to the Hellcat rather than the relatively light action in the R/T Scat Pack.

In terms of luxury content, the SRT 392 is every bit the grand tourer that the SRT Hellcat is.

Other differences are more obvious though – while the Scat Pack model gets a static spring and Bilstein damper suspension setup, the SRT 392 uses a Hellcat-like three-mode adaptive system which allows occupants to alter ride stiffness on the fly from the infotainment display. The system functions in the same manner as it does in the SRT Hellcat, but it’s clear the SRT 392’s tuning is not nearly as aggressive as the Hellcat’s. The ride height is slightly higher, the springs slightly softer, and the sway bars are slightly less substantial. While it’s still undoubtedly a sport-tuned setup, the components used differ from those in the SRT Hellcat.

Braking, however, does not. The SRT 392 gets the same meaty six-piston Brembo brakes that its more expensive counterpart does, and its available wheel and tire combination is the same as well, sans the wheels’ paint hue. With less mass over the front end of the car the 392’s weight distribution is more ideal than the Hellcat’s, and the lower weight means the brakes have an easier job slowing down the car.

Steering is something of a mixed bag – while the SRT Hellcat sticks with a hydraulically-assisted rack, both the R/T Scat Pack and SRT 392 use an electronically boosted one. Although there’s a small sacrifice in steering feel, the consolation prize is the ability to adjust steering weight on the lesser models, a feature that can’t be designed into a hydraulic rack.

In terms of luxury content, the SRT 392 is every bit the grand tourer that the SRT Hellcat is. Heated and ventilated leather seating, a leather-trimmed, flat-bottomed steering wheel, and the 8.4-inch Uconnect infotainment system with navigation and SRT Performance Pages functionality are standard here as they are in the SRT Hellcat, and this luxury content is another area where the SRT 392 clearly differentiates itself from the R/T Scat Pack.

One of the numerous improvements made in the 2015 refresh was the switch to active exhaust systems for all performance models from the R/T Scat Pack on up. So as you’d expect, the SRT 392 sounds the business when you fire up that big Hemi. However, that middle child syndrome hits a snag here as well.

For those that have never had seat time in a Hellcat, the SRT 392’s engine note is the stuff that muscle car dreams are made of. But those fortunate enough to have spent some time in the supercharged model will notice the difference. While the 392 sounds like a proper V8 bruiser in its own right, it lacks the guttural violence of the Hellcat which, quite honestly, sounds more like something that you’d see rounding Daytona Speedway than cruising down Main Street.

The same goes for the SRT 392’s performance. Sprinting to 60 mph from a standstill in just over four seconds is legitimately quick by production car standards, but the Hellcat’s mid three-second gallop puts it in league with six-figure supercars. Truth be known, you’d be hard pressed to find areas to really utilize 707 hp outside of a race track, so the SRT 392’s 222-hp deficit isn’t that much of a concern during normal driving.

Compared to well-equipped iterations of the Mustang GT and Camaro SS, the SRT 392 boasts both more grunt and more luxury, but the LX architecture that underpins the Challenger is both dimensionally larger than those two and fairly ancient from a technological standpoint. While the Challenger will hold off the Ford and Chevy in straight line sprints, its additional weight and sedan-based chassis – while admirably capable and a lot of fun to toss around – can’t muster up the same level of handling prowess. It’s just physics, man.

Challenger owners are most likely to replace their car with another Challenger.

Although the Challenger’s LX-based platform limits the car’s dynamics to some extent, it’s also a huge factor in the coupe’s chiseled good looks and grand touring comfort. The rumor mill speculates that the next big step for the Challenger will be a move to a new platform that it will again share with the Charger, based on the significantly smaller Alfa Romeo Giulia. If the rumor proves true it would bring the Challenger closer to the sixth-generation Camaro in size, and likely improve some of its dynamic limitations in the process.

But it’s also likely to come at the cost of the cavernous trunk, rear seats that adults can actually sit in, and a general lack of claustrophobia. One of FCA’s coveted talking points is that Challenger owners are most likely to replace their car with another Challenger, showing how fiercely loyal this big coupe’s fans are. You have to wonder if that passion will remain if this outlier muscle car’s design finally falls in line with the trends in rest of industry.

The National Highway Traffic Safety Administration (NHTSA) doesn’t provide a rating for the Challenger SRT. However, the non-SRT model earned a five-star overall rating. Every Challenger SRT comes standard with front, curtain, and side airbags in addition to electronic stability control, rain brake support, brake assist, and a rearview camera.

How DT Would Outfit This Car

Here’s how we’d order our Dodge Challenger SRT. We liked the manual transmission on our tester so we wouldn’t pay an extra $1,500 for the automatic. Instead, we’d spend that money on a sunroof and on the Technology Package, which adds goodies like rain-sensing wipers. Finally, we’d order the Yellow Jacket paint and get the twin black center stripes. Our ideal Challenger SRT would cost $51,580.

One thing is for certain: If muscle cars are your thing, nobody is doing it with more sincerity than Dodge is right now, for better and for worse. And although it’s not quite the king of the hill, the SRT 392 brings enough charisma, value, and capability to make a strong case for itself on any performance coupe shopping list.

The Challenger’s main challengers are the Ford Mustang and the Chevrolet Camaro. Both rivals are built on more modern platforms, they’re smaller, and they’re also more dynamic to drive. If carving corners is a priority, look at the other pony cars. If you want an old-school muscle car with a huge engine without spending Hellcat money, the SRT 392 is the way to go.

The Dodge Challenger is nearing the end of its life cycle — hypothetically, at least. Dodge keeps models on the shelf for longer than its rivals, and it has an impressive history of delaying new product launches. With that said, the current model will stay fresh in the foreseeable future because we don’t expect to see a brand-new Challenger until 2019.

From its engine to its heritage paint colors, the Dodge Challenger channels the spirit of 1960s muscle cars better than any other model on the market today. It’s no secret that upcoming government regulations will make it difficult for car makers to build big, sporty coupes equipped with a large-displacement engine that generate power without hybrid assistance. Pull the trigger, just in case the Challenger’s genus is headed towards extinction.

Update: We’ve updated our Challenger SRT 392 review to reflect the changes made for the 2017 model year. We’ve added information on safety tech and customization options for 2017.