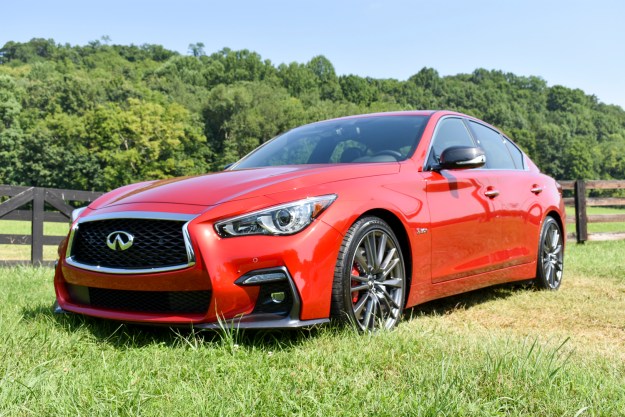 “The 2018 Infiniti Q50 is a fast and good-looking luxury sedan that just doesn’t connect on an emotional level.”

Most Japanese luxury cars are defined more by the German models they emulate than by their own identities, and that’s the case with the 2018 Infiniti Q50. It’s probably better known for being Infiniti’s BMW 3 Series fighter than for any of its own inherent qualities.

Like the 3 Series, the Q50 is a small luxury sedan that tries to be sporty as well as comfortable. To compete with the popular BMW—and other cars in this crowded segment—Infiniti threw everything it had at the Q50, from an available 400-horsepower engine, to Direct Adaptive Steering, a steer-by-wire system with no physical connection between the steering wheel and the road.

Infiniti gave the Q50 an update for the 2018 model year, providing the perfect opportunity to see how this Japanese sedan measures up to the competition. The road testing took place on the Q50’s home turf: the roads around Nashville, Tennessee, not far from Infiniti parent Nissan’s U.S. headquarters in Franklin.

Did the Q50 drive with the smoothness of a good Tennessee whiskey, or did it leave us with a hangover? Read on to find out.

This version of the Q50 debuted for the 2014 model year, and the 2018 update brings a handful of small changes. The exterior gets some styling tweaks, the interior gets spruced up with a new steering wheel, shifter, and additional stitching on the dashboard, meant to create a higher-quality feel.

Infiniti also reshuffled the lineup of trim levels for 2018. Buyers now get to choose from four: base Pure, midrange Luxe and Sport, and the top-of-the-line Red Sport 400.

The 2018 Infiniti Q50 has an interior that’s pleasing to look at, but not to touch.

The Pure model comes standard with features like power seats, dual-zone automatic climate control, and Infiniti’s InTouch infotainment system. The Luxe model adds a power moonroof and 18-inch wheels, and the Sport adds leather sport seats and other features on top of that. The Luxe and Sport models also get their own exterior styling features.

Apparently trying to put its best foot forward, Infiniti provided a Red Sport 400 model for this road test. The Red Sport 400 is the top Q50 model in terms of both performance and feature content. It includes a 3.0-liter twin-turbocharged V6 with 400 hp and 350 lb-ft from the Q60 coupe.

All Q50 models use a seven-speed automatic transmission, with standard rear-wheel drive. All-wheel drive is a $2,000 option on all models.

Whatever the model, the Q50 is a pretty good-looking car, Infiniti has managed to craft a design that is distinctive, without resorting to the excesses of rival Lexus. The front fascia—which gets some new detailing for 2018—looks aggressive, and the rear fenders swell and arch dramatically away from the rest of the bodywork. They looked great in the carbon fiber-covered rearview mirrors of our Red Sport 400 test car.

The Q50’s InTouch infotainment system has a somewhat unusual configuration. While most automakers stick with one display screen, the Q50 actually has two—one 8.0-inch screen, and one 7.0-inch screen. They’re stacked with the larger screen on top, giving the impression of one big portrait-oriented screen.

Infiniti does not intend for drivers to take their hands off the wheel while using any of the Q50’s driver assists.

This interface actually works pretty well, letting the upper screen show images like navigation maps, while keep menu buttons accessible on the lower screen, which also happens to be easier to reach. The touchscreen is supplemented by a handful of analog buttons, as well as a small rotary controller that seems like an afterthought.

The system itself is fairly responsive and easy to navigate, with large icons and easy-to-read text. However, the navigation maps were not very attractive, featuring bare-bones graphics. Apple CarPlay and Android Auto are not available.

Our test car had the optional Bose Performance Series audio system, with 16 speakers and some special software meant to tune sound quality specifically for the Q50. The sound is crisp and clear, and is especially easy to appreciate thanks to the Q50’s quiet cabin.

While Infiniti claims to have made some tweaks to the system’s programming, it still feels disturbingly artificial. It leaves the driver with absolutely no sense of what the front wheels are doing, giving as much feedback as the steering wheel in an arcade game.

But Direct Adaptive Steering wasn’t really designed for steering feel. Rather, it enables assist systems Infiniti says are supposed to center the car in its lane on highways, or help the driver point the nose into corners on curvier roads. The Tennessee test route included plenty of both, and the system didn’t seem very helpful in either application. With the assists on, the steering just felt very heavy, as if it was tugging against the driver’s hands.

It’s worth noting that Infiniti does not intend for drivers to take their hands off the wheel while using any of the Q50’s driver assists. Between Direct Adaptive Steering, adaptive cruise control, and Infiniti’s Distance Control Assist and Predictive Forward Collision Warning systems, it might be easy for customers to get the impression that the Q50 is something akin to an Autopilot-equipped Tesla. Infiniti and parent Nissan do plan to add autonomous-driving systems to future products, but for now the driver is 100 percent in control.

The 2018 Infiniti Q50 has an interior that’s pleasing to look at, but not to touch.

The Q50 Red Sport 400 delivers its 400 hp with enough punch to make it feel like a Japanese muscle car.

Aesthetically, the layout is very original. The center stack divides the cockpit into areas for the driver and passenger, and trim pieces twist their way from the center console up to the dashboard. It’s a great-looking interior.

But the materials that compose that interior appear to be a bit low quality for a luxury car. Even with our Red Sport 400 test car’s semi-aniline leather, aluminum trim, and the double-stitched instrument panel cover now used on all Q50 models, the interior felt a bit cheap. We also inspected the interior on a lower-level Luxe model, and that was even worse.

The Q50 is decently spacious, with comfortable front seats. But rear-seat legroom isn’t very generous—a common problem in this segment. Headroom is average, although taller drivers might find things a bit cramped.

If you name your car the Red Sport 400, it had better be entertaining to drive. The top Q50 model mostly delivers on that promise, delivering its 400 hp with enough punch to make it feel like a Japanese muscle car. The 350 lb-ft of torque always seems to be on hand, so using the seven-speed automatic’s paddle shifters isn’t really necessary. The engine even delivers a nice growl, especially for a V6 muffled by two turbochargers.

On twisty roads, the chassis is ready to indulge a little hooliganism. The Q50 doesn’t feel as light on its feet as some other small luxury sedans, but it doesn’t fall apart in the corners either. However, the Direct Adaptive Steering and its synthesized responses totally kill the buzz.

The Q50 comes with six programmable driving modes: Standard, Snow, Eco, Sport, Sport+, and Personal. Sport+ is really the only one you’ll need in most situations. It really seems to wake up the engine and generally let the Q50 live up to its sports sedan billing. That includes letting the tail hang out a bit in rear-wheel drive models.

On the more practical side, our rear-wheel drive Red Sport 400 tester is rated at 22 mpg combined (20 mpg city, 26 mpg highway) by the EPA. According to the car’s computer, we achieved 19.7 mpg, with an admittedly heavy right foot.

The 2018 Infiniti Q50 hasn’t been crash tested by the National Highway Traffic Safety Administration (NHTSA) or Insurance Institute for Highway Safety (IIHS). The virtually-identical 2017 model received the top “Good” rating in all categories from the IIHS except headlights, which were rated “Average.”

The 2018 Infiniti Q50 is a polarizing car. Its handsome styling is a major plus, as is the Red Sport 400 model’s powerful twin-turbo V6. But the tech always seems to be second guessing the human in what is supposed to be a driver-focused car, and the interior falls short of true luxury. The Q50 isn’t so much a rival to the vaunted BMW 3 Series as a complete alternative, one that does things completely differently. But BMW—and many of Infiniti’s other competitors—do it better.