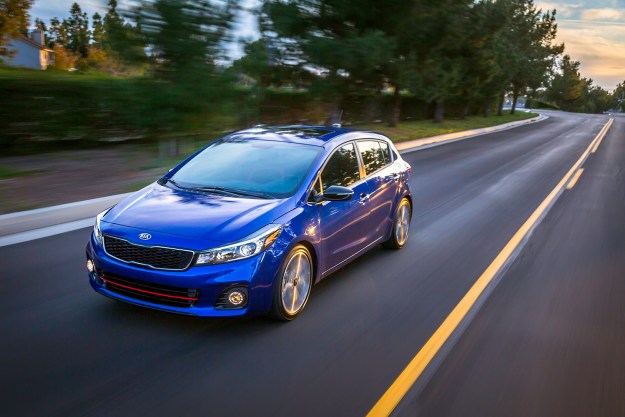 “Kia’s Forte5 SX is a value-packed commuter car with a sporty side.”

Kia, which has blossomed into a well-rounded brand that makes more than just economy cars, has recently set its sights on making sporty vehicles. While the BMW-battling Stinger is basking in the limelight, there’s a more affordable option further down the lineup that does sporty on a budget – the 2018 Kia Forte5 SX.

Kia has offered the Forte5, a hatchback version of its regular Forte, since 2011. A more powerful SX trim has always been available, but the model is now sportier than ever. You might even call it a hot hatch, a category embodied by cars like Ford’s Fiesta ST.

But unlike other hot hatches that have been heavily reworked to standard apart from their more pedestrian siblings, you’ll need a sharp eye to spot the Forte5 SX’s sporty touches. Except for 18-inch wheels, dual exhaust tips, red accents, round fog lights, and a slightly larger air intake on the front fascia, the Forte5 SX doesn’t make its athleticism known.

The real changes are lurking under the skin. Those includes a punchy turbocharged engine, a retuned chassis, stiffer suspension components, and a quick-shifting 7-speed dual-clutch transmission. It may be the sportiest Forte5 model in the lineup, but Kia still hasn’t forgotten about what made its vehicles so popular: value. So, the SX trim comes with nearly every feature you could ever want in a car, including some high-tech ones that aren’t offered on others in the segment.

On paper it has specs and features that resemble those of a hot hatch.

We tested a flagship model with a $28,395 sticker price, making it the most expensive Forte5 in the lineup. It’s a far cry from the base, which starts at a more modest $19,195. The automaker does offer the Forte5 in two other trims – the LX and EX – but those are more about commuting from point A to B.

Our top-of-the-line test car came with the optional SX Premium Technology Package ($3,600) that brings a host of goodies, including sport leather seats with orange stitching, a flat-bottomed leather steering wheel, and alloy pedals. The comfortable seats provide a good amount of bolstering for when the mood for spiritedly driving strikes.

A 7.0-inch touch screen in the center console includes both Android Auto and Apple CarPlay compatibility, both must-haves on any new car. A 4.2-inch LCD display sits in between the gauges, providing driver-related info in an easy-to-read layout. Navigation, an auto-dimming rearview mirror, blind-spot detection, lane-change assist, rear cross-traffic alert, and HID headlights are also included with the package.

While Kia has consistently worked on its infotainment system, the unit found in the Forte5 SX is still a little confusing to use. For instance, it totally locks you out of using navigation when the car is in motion. Luckily, getting your smartphone to handle all of the infotainment duties is simple: Just plug it into the USB port that’s conveniently located below the center console.

Despite being Kia’s more affordable models, the Forte5 SX’s cabin is a nice place to spend a lot of time in.

Despite being one of Kia’s more affordable models, the Forte5 SX’s cabin is a nice place to spend a lot of time in. You get dual-zone automatic climate control, a power sunroof, and ventilated seats on top of the standard heated chairs — all of which are included with the tech package. The only thing that’s missing in the package, and the car itself, is a decent audio system. We would’ve loved to see a Harman/Kardon sound system as an option or as a part of the available tech package, as the standard six-speaker system is subpar at best.

Because of the hatchback body style, the Forte5 SX boasts an airy cabin, even for five full-sized passengers. The car’s available cargo capacity is impressive, as well. There’s 23.2 cubic feet of available cargo space with the rear seats in place, while that figure opens up to a total of 56.4 cubic feet with the seats folded. That last figure rivals some compact crossovers.

While the rest of the Forte5 lineup makes do with a 164-horsepower 2.0-liter inline-four, the SX trim gets a turbocharged 1.6-liter inline-four that’s rated to make 201 horsepower and 195 pound-feet of torque. Those figures are right on par with what other athletic hatchbacks have, but numbers only tell half of the story.

There are two transmission choices for the 2018 Forte5 SX, including a 6-speed manual and a 7-speed dual-clutch automatic transmission. The quick-shifting 7-speed transmission joined the Forte5 SX’s list of features last year, and helps give the vehicle some street cred in the hot-hatch segment.

Our tester came with the dual-clutch gearbox, which does a great job providing upshifts and downshifts quickly and smoothly at high speeds, but struggles at lower speeds. Punching the throttle from a standstill leaves the gearbox perplexed, offering little oomph to begin with, and then suddenly allowing the engine to let loose all at once. This makes it difficult to smoothly get away from a standstill.

The transmission also had trouble reversing, bucking like a wild horse at times and providing absolutely no power at others. Trying to parallel park was a hassle, as the engine offers a little bit of its power and then takes it away a second later.

At higher speeds and higher gears, the issues with the transmission disappear. It may not be the quickest dual-clutch on the market, but it shifts faster than having to row through gears yourself and, thanks to the steering-wheel-mounted paddle shifters, is fun to use. The transmission will also hold gears for you, which makes it a willing companion on a windy road.

The SX isn’t a hot hatchback, but it’s the comfortable and sporty hatch that has everything you could ever want.

Speaking of curvy tarmac, the Forte5 SX really impresses in corners. Its punchy engine propels it out of turns, while the taught suspension and stiff chassis keep body motions to a minimum. Lackluster steering feel keeps it from being as sharp as a Ford Fiesta ST or Volkswagen Golf GTI, but the rest of the vehicle isn’t far behind.

Where the SX shines over the competition is in everyday situations. The ride never felt harsh, the cabin is quiet, and the powertrain offers more than enough grunt to pass on the highway. The SX isn’t a true hot hatchback – competitors like the Focus RS trounce it by 150 hp — but it’s the comfortable and sporty hatch that has everything you could ever want.

When not driven with a lead foot, the Forte5 SX has a combined EPA rating of 27 mpg (25 mpg city and 30 mpg hwy). In our testing, our SX got 32 mpg on the highway and 24 mpg around town, which is bang on for its ratings.

The Insurance Institute for Highway Safety doesn’t have crash-test scores for the Forte5. The four-door, though, is one of the IIHS’ Top Safety Pick+ choices. The National Highway Traffic Safety Administration gave the Forte5 a five-start rating in the side crash test and score of four stars for the rollover test.

The SX is backed by Kia’s extensive warranty coverage. There’s a 5-year, 60,000-mile new car warranty, as well as a 10-year/100,000-mile limited powertrain warranty. The anti-perforation warranty (which covers deep rust) and roadside-assistance plan run the same length as the new car warranty.

If performance is what you’re after in a Forte5, the choice is simple: Go with the SX. While we haven’t tested a regular Forte5 with the 2.0-liter four-cylinder engine, the punchiness of the turbocharged 1.6-liter motor is worth the price of admission. Drivers who enjoy finding a good road to let loose on the weekends, will enjoy the sport-tuned suspension, sport steering wheel, sport seats, alloy pedals, and shift paddles that are a part of the car’s standard features.

Unless you’re an urbanite or deal with stop-and-go traffic everyday, we’d go with the 6-speed manual transmission. It shouldn’t have any of the issues that we experienced and should make the hatchback more engaging to drive. While pricey, the SX Premium Technology Package is also worth the extra money.

The Forte5 SX falls short of being a hot hatch. It doesn’t have the same playful nature or muscular look as tried-and-true competitors like the Fiesta ST or Volkswagen Golf GTI. The main draw of a hot hatchback is its ability to put a smile on your face. While fun and engaging, the Forte5 SX just isn’t as enjoyable as its gutsier peers on a good road.

That doesn’t mean it’s a bad car, though. In the real world, the Forte5 SX isn’t that far off in terms of performance. And at the end of the day, it doesn’t require you to compromise interior space and features for a sportier ride. It’s fun when you want it to be and composed and comfortable when you’re just looking to get from one place to another. That makes it a worthy addition to everyone’s shopping list for an economy car with some personality.