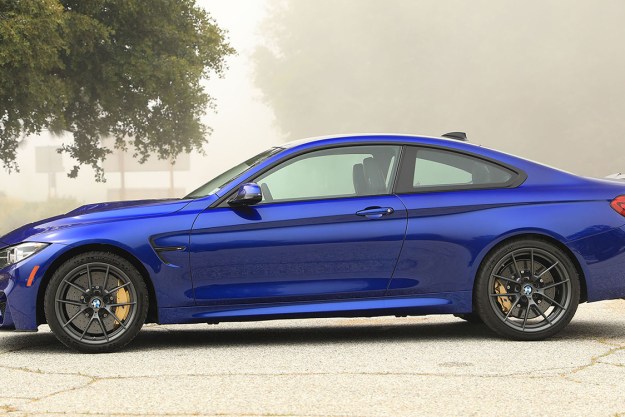 “The CS tangibly elevates both the M4’s look and performance, but pricing doesn’t match the upgrades.”

Years ago, BMW’s M division became a standard bearer for fast, engaging street cars that infused a bit of motorsport-derived performance into the mix, finding a balance between the responsiveness that enthusiasts crave from a sports car and the refinement they need in a daily driver.

That mission has evolved over time, though, and M models have leaned more into comfort, tech features, and style rather than outright dynamic capability in recent years. But middling dynamics paired with a lack of emotional character isn’t a strong combination when the goal is to attract the attention of luxury performance enthusiasts. And while it’s a formidable machine in its own right, the M4 has faced worthy competition both from not only its German rivals, but from our side of the pond as well, with cars like the Camaro SS 1LE and Mustang Shelby GT350 proving that the Americans can build a car that turns as well as it goes.

But in 2016, BMW gave the M4 a large dose of credibility when it unleashed the limited-production GTS model, a hardcore, track-tuned machine replete with fixed-back racing buckets, racy aero bits, and a trick water injection system that bumped its turbocharged output to nearly 500 horsepower.

The CS offers more power, grip, and visual attitude while still acknowledging that it is, at its core, a street car.

Yet with a sticker price in excess of $150,000 and just 300 examples allotted for North America, the GTS model was frustratingly unobtainable for all but the most diehard (and well-heeled) BMW fanatics. And while the standard M4 has seen steady improvement since its debut in 2014, there’s still been a sizable gap between the base model M4 and the nearly-a-race-car M4 GTS.

The CS model – or Coupe Sport – seeks to bridge that gap. Limited to 3000 units worldwide, the CS brings more power, grip, and visual attitude to the table while still acknowledging that it is, at its core, a street car.

The CS borrows from the GTS parts bin throughout, but the former stays closer to the standard model in terms of overall aesthetic. Yet even though you won’t find any big wings or candy-colored roll cages here, there still are a number of visual cues that make this model identifiable from a glance.

The CS’s domed and scooped hood is borrowed from the GTS, and as with the CS’s unique front splitter and rear spoiler, it’s made from light weight carbon fiber-reinforced plastic. New light weight forged wheels are part of the deal as well, measuring 19 inches in diameter up front and 20 at the rear, and they’re paired up with Michelin’s incredibly grippy Pilot Sport Cup 2 tire. The result is an M4 that doesn’t scream for attention like the GTS does, but ups the visual ante beyond the standard car a tangible degree.

The cabin sees some attention as well, with motorsport-inspired door cards from the GTS that ditch traditional door handles and arm rests in favor of minimalist outcroppings for the controls and pull straps to yank the door closed. That motorsport-inspired aesthetic carries over to the center console, which loses its storage and arm rest in favor of an alcantara-covered pad that runs along the transmission tunnel. Alcantara is a general theme here – you’ll find it on the steering wheel, dash inserts, seats, and elsewhere.

The result is a stark but sporty-looking interior that’s also a bit of a mixed message. While the aforementioned changes seem to have been done in the interest of weight savings and a general focus on track use, the CS also comes standard with a 12-speaker audio system, air conditioning, and heated seats. We can’t help but wonder if the inclusion of normal armrests would have been a worthwhile compromise, considering the liberties taken elsewhere in the name of creature comforts.

While the M4 CS doesn’t have the GTS’s wild water-injection system, it’s still got a few tricks up its sleeve. The CS starts with the Competition Pack’s version of the M4’s 3.0-liter inline six cylinder and turns up the wick by way of a less restricted exhaust system as well as revisions to the engine management software, a combination that results in 454 horsepower and 442 pound-feet of torque.

While that’s only a gain of 10 ponies versus the Competition Pack engine, the additional 36 lb-ft give the CS noticeably more oomph off the line and when dipping into the throttle at low speeds. The exhaust tweaks also give the engine more personality, something that’s been a bit lacking since the M4’s debut.

Yet for every two steps the CS drives the M4 forward, it seems to take at least one step back. In terms of the powertrain, the seven-speed dual-clutch gearbox is the only transmission on offer with the CS. Those that want to row their own will have to look elsewhere in the M4 lineup.

As with the standard M4, infotainment tasks are handled by BMW’s iDrive system, here equipped with an 8.8-inch display that allows for user inputs through both the hard buttons and rotary knob on the center console as well as the touchscreen. Navigation with real-time traffic information is on hand, as is wireless Apple CarPlay, though the latter is subscription-based after a one-year trial.

In many ways, the CS feels like the culmination of years spent tweaking and refining the M4 rather than a limited-production, track-focused brute. Sure there’s more noise and more grunt, but since the M4 Competition Pack’s suspension setup carries over unchanged to the CS, it’s fairly civilized around town (albeit substantially stiffer than a garden-variety 4-Series, even in the Comfort setting).

The steering, which has been justifiably knocked for feeling artificial and distant in the past, is worthy of praise, too. Now well-weighted in each of its settings, the additional response provided by the Cup 2 tires translates back to the steering wheel. It’s a similar story with the DCT as well, which has had a tendency to be unrefined and a bit harsh around town. While BMW’s dual clutch hasn’t completely shed those issues, they are significantly less distracting here than they have been in the past.

Though it’s tamer than the GTS, the M4 CS is still truly in its element when driven with purpose on a good road. In that context the lack of armrests is less of an annoyance because your hands are locked at 10 and 2 on the wheel, and the sport seats’ lack of lumbar support is forgivable because your seating position is configured to prioritize input control rather than comfort.

As with all M4s, the CS feels properly quick in a straight line, with meaty mid-ranged turbocharged pull. Although the engine tweaks aren’t transformative, the extra output is appreciated, and it’s put to good use with the abundance of mechanical grip on hand.

Our tester was outfitted with the M Carbon Ceramic Brake package, an $8150 option. We were impressed not only by the fade-free stopping power they provided, but also by the excellent pedal feel and relatively noise-free operation we experienced around town – a best case scenario for carbon ceramics that’s pretty hard to come by, making the hefty price tag for the option easier to swallow.

The M4’s competitive set is normally comprised of cross-town rivals like the Audi RS5 and Mercedes-AMG C63 S. However, with a starting MSRP of $103,500 and an as-tested price of $112,795, the M4 CS finds itself in different company.

For that kind of money, you could consider track superstars like the Chevrolet Camaro ZL1 1LE, which offers 650 horsepower, near-endless mechanical grip, and starts at $30,000 less than the BMW, though it lacks the aesthetic poise and cabin refinement found in the M4.

And at a starting price of $102,100, the Porsche 911 Carrera T is also a viable option. While down on horsepower versus the BMW, Porsche’s fit and finish is on par, and the 911’s chassis is arguably the best in the business.

BMW offers a four-year, 50,000 mile limited warranty on the M4 CS, along with four years of roadside assistance and a 12-year warranty for rust and corrosion issues.

The M4 CS is outfitted with driver and passenger front airbags as well as side-impact airbags for front seat occupants.

Even though the asking price largely relegates the M4 CS to collectors and BMW fanatics, it illustrates that BMW still knows how to make an engaging intermediate sports coupe.

But for those of us who don’t prize exclusivity above all else, the compromises inherent to the CS model – namely the race car theater found in the cabin and the lack of manual gearbox availability – land this M4 frustratingly just short of greatness. We can’t help but wonder what a standard M4 would be like if some of this go-fast hardware made its way onto the options sheet without the caveats and the out-of-step price tag.

In the meantime, if you’ve got your heart set on a fast BMW, we’d recommend giving the excellent M2 Competition a spin at nearly half the price.