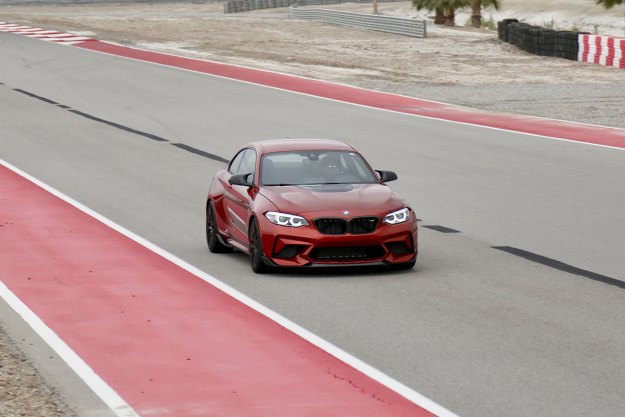 “If you love to drive, the M2 Competition belongs in your garage.”

I thought I had BMW figured out; I was sure that I had accurately diagnosed its current predicament. It seemed the German automaker was at the mercy of luxury buyers, and would follow trends wherever they may lead. In a bid to acquire as much SUV market share as possible, BMW had pushed its X-badged models to the front of the development line, and punted its more traditional sedans and coupes to the back. The SUVs thrived from a sales perspective, but all BMW vehicles suffered a loss of “ultimate” to their “driving machines.”

An ice bucket of truth was subsequently poured upon my head at a recent BMW full model line drive, where the resilience of its engineering was put on display. With few exceptions (I just can’t appreciate the X2), each of BMW’s latest products showed distinct driver’s car attributes when prodded on road and track. Furthermore, the performance progression of standard, to M Sport, to full-blooded M models was better articulated than ever.

The closing argument for BMW’s enduring identity comes in the form of the 2019 M2 Competition ($59,895). Though built for considerably less consumption than any of its X-badged crossovers, the littlest M is arguably the brand’s best. Compact, rear wheel-drive, inline-six powered, and available with a manual gearbox, the M2 Competition is physical evidence of Bavarian grit.

Just-right sizing for a sport coupe

The 1 Series M was a wonderful little sports car; it was chock full of M3 goodies, and it came in a feisty package. Regrettably, its physique — stubby and tall — was somewhat awkward. In 2016, BMW put forth a longer, lower, and wider successor. The M2 felt ideally sized for fun, with a stocky but proportional figure and sufficient interior room for four passengers.

The M2 Competition alters the standard M2’s design in subtle ways, but the just-right sizing remains. New adaptive LED headlights, a reworked grille, re-sculpted lower fascia with larger air intakes, new door mirrors, fresh 19-inch forged alloy wheels (in machined or black painted styles), and M2 Competition badges round out the styling tweaks. Two new paint colors enter the mix as well: sunset orange (which reminds me favorably of the 1 Series M’s hue) and Hockenheim silver. Our tester is clad in the new silver, which transforms from a pearlescent white to a metallic silver depending on lighting.

The mingling of curves and edges within the M2 Competition’s bodywork matches its powerful yet agile performance. No surface appears wasted — all are taut and purposeful. Amidst its subset of two-door compact sport coupes, the M2 falls neatly between the low, sweeping Porsche 718 Cayman and the dramatic, angular Audi TT RS.

The M2 Competition is sized for fun, with a stocky but proportional figure and room for four passengers.

Inside, the changes are even slighter, including new Dakota leather sport seats with blue or orange stitching and integrated headrests, carbon fiber dash trim, and digital instrument gauges. Material quality fits with BMW’s asking price, meaning there’s a good mix of upscale plastics, textured surfaces, and soft leather — just don’t come looking for plushness. The front seats, for their part, are remarkably comfortable, with heating, 14-way power adjustment, and lumbar support to keep you feeling fresh after hours at the wheel.

Much like the Mini Cooper, the 1 Series cabin is more spacious than it appears from the outside, allowing my six-foot frame to fit easily behind my own driving position (with my head just nestling against the headliner). 360-degree visibility is excellent, which comes in handy either when fighting commuter traffic or finding your turn-in point on track. The trunk is of usable size as well, within two netted cubbies to stash items that might otherwise flop around. It’s certainly more practical than the Cayman and the TT RS.

All the tech you need, and nothing more

Balancing analog appeal with cutting-edge convenience features is a challenge for most performance brands. Some of BMW’s more luxurious models can feel overloaded with gadgets, but the M2 Competition employs only useful niceties.

Featuring BMW’s iDrive 6.0 interface, the 8.8-inch touchscreen infotainment is responsive and vivid. Steering wheel controls, voice prompts, or a rotary dial with button shortcuts can be used to easily navigate the tiled layout to find all telemetry, media, navigation, and vehicle information. Audi and Porsche’s infotainments are equally intuitive, but the TT RS forgoes a center screen, using a large, reconfigurable digital driver display instead. BMW’s version of Apple CarPlay is the best we’ve experienced, not requiring any physical connection to your smartphone. Unfortunately, CarPlay is only free for the first year (after which it becomes a paid subscription), and Android Auto isn’t available at all.

Hold on to your hats

BMW’s Competition moniker is typically reserved for the most track-capable version of an M car, but in the case of the M2 Competition, it’s the only M2 available. That might suggest the car isn’t deserving of its Competition name (with no “standard” version to benchmark), but performance on road and track defends the badge.

Rather than tweaking the M2’s single-turbo straight-six engine to comply with tightening emissions regulations, BMW ported the twin-turbo unit from the M3/M4 (sexy carbon fiber strut brace and all). Conscious of the delicate M hierarchy and working with reduced airflow compared to the M3, BMW detuned the M2 Competition’s six to 405 horsepower while retaining the same 406 pound-feet of torque. The new powertrain accounts for an increase of 40 hp and 37 lb-ft over the retired M2 — with a weight penalty of 110 pounds.

BMW offers a choice of two gearboxes to send power to the rear wheels: a six-speed manual or seven-speed dual-clutch automatic. The standard transmission hustles the M2 Competition to 60 mph in 4.2 seconds while the DCT shaves off 0.2 seconds. Peak torque comes on from 2,350 rpm and holds on until 5,230 rpm, meaning there’s usable power all over the rev range. Stringing the straight six out to its 7,500 rpm redline is a treat; boost builds progressively and the engine note takes on a nice rasp as the revs climb.

The M2 Competition is frighteningly quick in a straight line and its short wheelbase lends itself to some hilarious power slides, but it’s the curvy roads and tight tracks where this coupe comes alive. Blasting through The Thermal Club’s 2.3-mile South Palm road course, the new and improved M2 leans on its massive, 15.7-inch front and 15-inch rear brakes to balance its extraordinary grunt. A fixed suspension keeps the 3,600-pound two-door flat through corners while Michelin Pilot Super Sport tires cling to the limits of grip at apex. Steering is best left in comfort mode, where light directions through the wheel translate to immediate turn-in. With limited feedback from the electronically assisted rack, I rely on my other senses (mostly my butt) to sense waning traction. Shifts from the dual-clutch are rapid and well timed in sport plus/auto mode to keep the turbochargers cookin’.

Stringing the straight-six out to its 7,500 rpm redline conjures a pleasant rasp from the exhaust.

Off the track, the M2 Competition is largely the same menace — in good ways and bad. The stiff suspension that I’d loved on the road course is rather firm around town. The ride never approaches harsh, but I can feel every surface imperfection through the chassis. Audi and Porsche’s adaptive suspensions, by comparison, are a bit more forgiving. The DCT transmission doesn’t love low speed transitions, grumbling into gear with a little shudder (all the more reason, in my opinion, to go with the manual gearbox). Rougher edges aside, the M2 Competition is a good mix of comfort and driving entertainment for your weekly commute and weekend canyon runs.

If it’s outright speed you’re after, the all-wheel drive TT RS is hard to beat; 0-60 mph takes just 3.6 seconds, and top speed is 174 mph. Points against the Audi include its tiny rear seat space and equally cramped trunk (12 cubic feet). Though Porsche’s 718 Cayman S is a better performance match for the M2 Competition, its $70K starting figure bumps it out of the running. Instead, the 300-hp base Cayman is the least expensive of this grouping at $57,950 to start. With the smallest engine and least power, the 718 is slowest to 60 mph (4.5 seconds), but it offers the best combined mpg (24). Without any rear seats, the Cayman has the least utility of the three cars. Enthusiast points will be awarded to the Porsche for its available manual gearbox and mid-engine configuration.

A relatively light options list for the M2 Competition makes my build simple. Like my test vehicle, I’d paint my personal M2 in Hockenheim silver ($550), but would choose black 19-inch forged alloy wheels. Inside, I’d retain the black Dakota leather with blue accent stitching and carbon fiber trim. To get wireless phone charging and a Wi-Fi hotspot, I’d need to equip the Executive Package ($1,200). That brings the MSRP to $61,645 (destination included).

The little M car that could

I want to call the M2 Competition a taste of BMW nostalgia, but as my recent sampling of BMW models showed, the plot was never fully lost. Through its now expansive lineup, BMW still favors the driver. The M2 Competition, then, is a celebration of the type of car that established the brand and solidified its reputation. Engaging and finessed, the littlest M car is propped on the shoulders of every BMW-badged SUV that has and will bring new customers into the fold.

The Porsche 718 Cayman and Audi TT RS are wonderful sports cars, each equipped to give the M2 Competition a good fight on both road and raceway. Alas, the M2 Competition earns my vote for its potent engine, playful dynamics, and usable interior space.

If you love to drive, the M2 Competition belongs in your garage.