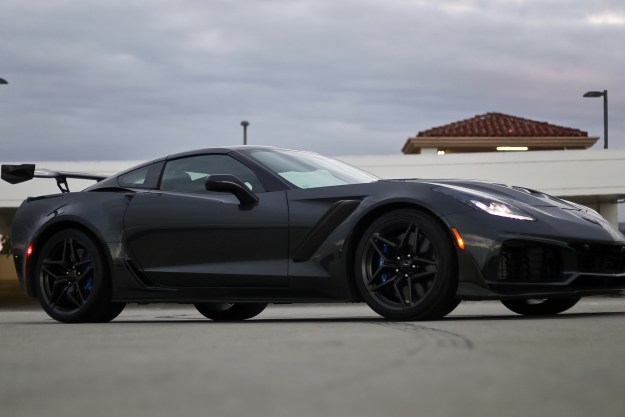 “Tomorrow’s high-tech supercars will find new ways to thrill, but never with the same visceral effect as the ZR1.”

The 2019 Chevrolet Corvette ZR1 is a front-engined, V8-powered, rear wheel-drive, manual-equipped sports car. At a time when all-wheel drive, lower displacement, mid-engine layouts, and dual-clutch automatic transmissions are the norm of the supercar world, why on earth would we – a tech site – pay any mind to such a seemingly unsophisticated vehicle?

The answer is context. Before performance cars become uniform in their genetic makeup; before every comparison is based on figures rather than philosophy, we want to experience the very best of a dying breed. The all-new ZR1 collates the most refined principles from the classic go-faster school of thought — racing-derived aerodynamics, ultra sticky tires, massive brakes, and insane power — to give us a perfect summary of the past century.

The Corvette ZR1 is not a pretty car; one doesn’t become lost in its curves or delicate accents. Rather, the ZR1 frightens onlookers into reverence. Gaping air dams, bulging ducts, and protruding aerodynamics make no attempt to mask the supercar’s extraordinary power. And, when dipped in a subtle hue like our tester’s magnetic gray, the ZR1 transforms into a sort of dark alley nightmare.

But this terror isn’t one we wish to escape. We’re called to the danger, even finding beauty in the ZR1’s brutal form. Hollowed star wheels in a black satin finish are as elegant as they are severe; brilliant blue brake calipers flicker within their dark housings and complement ZR1 badges on the hood and rear bumper; piercing LED light signatures declare intelligence within a muscle-bound bod.

Then there’s that spoiler. An element of the ZTK track package (which also features winglets for the front splitter and Michelin Pilot Sport Cup 2 tires), the ZR1’s massive rear wing is not for everyone. Perhaps it’s the fart-can Honda Civics and Fast and the Furious films that have warped society’s perspective, but big spoilers are never taken seriously. Despite the (justifiable) hate, however, the ZR1’s adjustable wing just… works. Perhaps we’d feel differently about a bright orange model, but our tester channels a certain Batmobile cool.

The ZR1 packs plenty of interior technology and convenience features.

Inside, we find the same unapologetic detailing as the exterior – to a less favorable impression. Save for some carbon fiber trim, Alcantara layering, ZR1 badging, and contrast stitching, little separates the ZR1 from a standard, $70,000 Corvette interior. Compared to the R8, 911 GT2 RS, and GT, the ultimate ‘Vette is clearly built to a budget, with merely acceptable materials and finishes. As evidence of this cost-conscious packaging, the ZR1 (a track-honed animal) doesn’t come standard with well-bolstered sport seats. Instead, Chevy charges an additional $1,995 for its competition buckets.

Tech standards, and little else

Chevy’s MyLink infotainment is easy to navigate, but slower to respond and less visually striking than rival systems. Physical controls on the center stack and steering wheel provide a sufficient workaround for many of the in-car settings. If you were hoping for racing-style dials or cool graphics from the instrument cluster, prepare for disappointment. At least the head-up display features a horizontal tachometer and shift timing lights to add a measure of excitement.

Driver assistance features are limited to a multi-angle camera system and the aforementioned head-up unit. A limited spread of active safety goodies is par for the course when it comes to supercars, but the Corvette’s camera tech needs to be updated.

Justification for the car’s six-figure price tag comes from its otherworldly performance.

While an overhead view would be appreciated, our biggest issue with the system is its resolution. Sure, you can identify rear cross-traffic when pulling out of a parking space, or estimate how close your expensive front splitter is from the curb, but details and precision are lacking from the grainy display.

A plush cabin and cutting edge tech would be welcome amenities, but they aren’t the reason Chevy built the ZR1. Rather, justification for the car’s six-figure price tag comes from its otherworldly performance.

Allow us to throw some numbers your way: 755 horsepower, 715 pound-feet of torque, 212 mph top speed, three seconds to 60 mph, 950 pounds of downforce, and 355-section rear tires. Keep in mind the ZR1 is boasting all this with a stick shift, a removable roof, and two driven wheels. Are you sweating yet?

The ZR1’s over-caffeinated heart is a progression of the Z06’s LT4 powertrain. A significantly larger supercharger (making 14 bar of boost vs. the Z06’s 9.4), port and direct fuel injection, and internal tweaks give birth to the ZR1’s LT5 V8.

Peak torque is available from 2,200 rpm, which translates to vicious mid-range pulls and burnouts through three consecutive gears (with traction control switched off). Adding to the theatre is a savage exhaust note that grows more indignant on approach to the 6,500 rpm redline.

A choice of seven-speed manual or eight-speed automatic transmissions sends power through an electronic limited slip differential to the rear tires. We’ve sampled GM’s eight-speed in other performance vehicle applications and can confirm its competence, though the standard seven-speed feels right for the ZR1’s particular breed of speed.

Rowing the short-shifting gearbox is a pleasant labor, assisted by a forgiving clutch. Ushering the lever into first gear does require a bit of effort, but the struggle fits the car’s gruff demeanor.

GM’s Magnetic Ride suspension continues to be the gold standard of adaptive damping setups, offering an ideal mix of ride comfort and flat cornering. Even with the ZTK’s stiffer springs and shocks, the ZR1 remains compliant over pockmarked roads. Three drive modes alter the car’s character considerably. Tour mode closes the exhaust baffles and dims throttle response, turning the ZR1 into a docile commuter. Sport and Track give up on stealth, progressively sharpening the ZR1’s senses and dialing up the drama.

Traction control is disarmed with a single press of a button, while a longer hold kills stability control as well. Without electronic aids, the ZR1 is one flex away from tearing its shirt. Ultra grippy Pilot Sport Cup 2 rubber and functional aerodynamics do an admirable job controlling the beast, but both elements need proper conditioning.

The tires will come up to temperature eventually, but for the aero to take effect, you need some serious pace (e.g., a racetrack). Out of this environment, it’s best to leave the nannies on — we promise they don’t spoil the fun.

Chevrolet has refined its Corvette over several decades into a precision instrument.

As a daily driver, the ZR1 has only one major failing. While not the lowest car in the world, clearance for the front splitter is minimal, requiring some serious acrobatics to avoid scraping on even modest driveways and bumps.

The obvious fix for this would be an optional hydraulic lift, which is available on many supercars rivals. An argument could be made that the additional weight of such a system would compromise the ZR1’s performance, but we think that decision should be left to buyers.

As a track-bred titan, the Corvette ZR1 matches up most closely with the Porsche 911 GT2 RS and Ford GT. If value is among your buying criteria, you may also consider the Audi R8 V10 Plus. Empirical wins are spread across the group, with the ZR1 claiming the most power (755 hp), the Ford GT achieving the highest top speed (216 mph), and the GT2 RS owning the race to 60 mph (2.7 seconds). Objectively, the R8 boasts the most compliant ride and arguably the best soundtrack, the GT is the most exotic looking, and ZR1 is the most engaging to drive (credit the manual gearbox).

The Corvette ZR1 is backed by Chevrolet’s standard three-year/36,000-mile limited warranty and five-year/60,000-mile powertrain warranty, which is also the same length as the 24-hour roadside assistance program. Though some Z06 owners have encountered overheating issues at the racetrack, the ZR1’s vastly improved cooling system should prohibit such problems.

Much like Porsche’s 911, Chevrolet has refined its Corvette over several decades into a precision instrument. Even packing 755 hp, the ZR1 is balanced, accessible, and capable of terrorizing far more sophisticated supercars. An underwhelming interior puts a damper on the day-to-day ownership experience, but driver engagement, an all-American attitude, and an aspirational (not inconceivable) price tag assemble a compelling case for the ultimate ‘Vette. Tomorrow’s high-tech supercars will find new ways to thrill, but never with the same visceral effect as the ZR1.