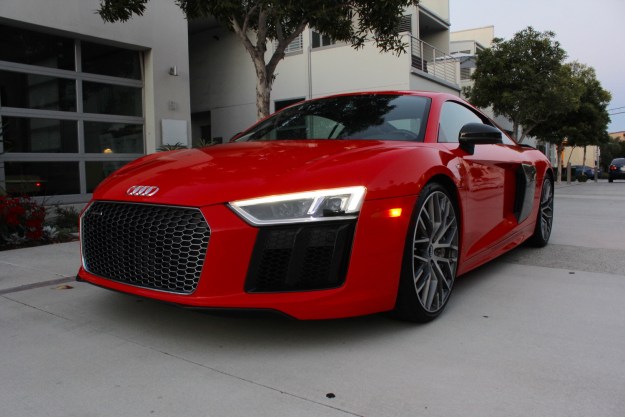 “The 2017 Audi R8 is the only supercar that’s as exciting on the track as it is dawdling through a neighborhood.”

The truth is, the only people who ever fantasize about a “daily driver supercar” are the ones who can’t really afford them. When the pinnacle of vehicular engineering and design escapes your financial reach, you dream of bundling your practical needs and performance desires into one generalist purchase. By contrast, those with the wherewithal to purchase a new supercar almost certainly can afford one or more additional cars to tackle family hauling and other utilitarian duties.

This reality liberates engineers to design supercars without compromises. Sure, everyone has to comply with safety regulations, but if there’s no concern for trunk space, fuel economy, or affordable build materials, the restrictions on automotive visionaries are few.

But what happens when an automaker tries to build the do-it-all supercar: one that’s comfortable and agile, sharp and subtle, powerful and tamed? That’s precisely the challenge Audi underwent in 2007 with its first generation R8, and now its successor seeks to improve the total package.

Supercars don’t exactly have a mold like every other segment of vehicle. Each automaker attempts to push the boundaries of engineering and styling in its own way, but all step out of their comfort zone to some degree. Here’s the first step on the 2017 Audi R8’s alternate path.

The low-slung coupe uses sharp creases, carbon fiber accents, and a mid-engine layout to distinguish itself from lesser sports cars, but it doesn’t command attention in the same way as rivals like the McLaren 570S and Lamborghini Huracan. My Dynamite Red tester is about as bold as you can configure the new R8 (at least until the Spyder and its golden yellow paint become available), yet onlookers don’t seem to react to the car with the same stupefied expression as other, more artistic models.

But what the R8 yields in flash, it makes up for in cohesive design. The angular body is one of the most futuristic shapes ever to roll off a production line. While some supercars can be confused as “some new Ferrari or Lamborghini,” (sorry McLaren) the R8 is almost immediately recognized as an Audi – even if the nameplate is unknown. That’s because Audi’s latest models are all characterized by piercing LED headlights and taillights, ornate wheel designs, and angular bodies.

Though the second generation R8 maintains its predecessor’s silhouette, every body panel has been re-sculpted to give the subtle supercar new life. A platinum mesh hexagonal grille dominates the front end, and is flanked by sets of blacked-out strakes to divide the air inlets. Audi has extended the new R8’s roofline in fastback spectacle, while the iconic side blades have been replaced with two pieces of carbon fiber – the lower of which channels air into the engine bay. The rectangular rear houses a pair of trapezoidal cheeks with thin LED taillights and honeycomb grates to help cool the mighty motor. Aerodynamic accents are restricted to a carbon fiber front splitter, rear wing and diffuser.

For such a modest exterior, the 2017 R8 V10 Plus has no qualms asserting itself. Nestled just behind the noggins of driver and passenger is a 5.2-liter naturally aspirated V10 motor ported from the Lamborghini Huracan LP610-4. The standard R8 detunes the Italian-built engine to a respectable 540 horsepower and 398 pound-feet of torque, but my V10 Plus tester unleashes a full 610hp and 413 lb-ft of torque via a seven-speed dual clutch transmission.

Sadly, the original R8’s gated manual is no longer an option, but thanks to Audi’s notorious Quattro all-wheel drive system, the dual-clutch helps the R8 V10 Plus achieve a 0 to 60 mph sprint of just 2.9 seconds and a top speed of 205 mph. Among its rivals, only the Porsche 911 Turbo S can beat the R8 off the line, but top speeds are even across the board. Far from Orange County’s suburban chaos, I was able to test the R8’s launch control, and I’d wager the R8’s lack of wheel spin translates to a faster sprint than Audi lets on.

Quattro isn’t just good for rocketing out of a hole, too. Grip is delivered in unending doses through just about any speed. Audi’s drivetrain intuitively powers whichever wheel or wheels have the most traction in bends, letting drivers keep their right foot planted for faster corner exits. Even with stability control turned off, the R8 behaves like a kid on Christmas Eve.

Jousting with G-forces is a kick in the pants, but nothing beats the audio track that takes over as you approach the R8’s 8,700 rpm redline. Peak torque registers at 6,500 rpms, but with such a prodigious power band, it’s worth every decibel to hold gears that extra fraction of a second. Without reservation, I’d call the R8’s engine note sovereign among production motors. Aston Martin’s 6.0-liter V12 comes close, but nothing wails quite like this powertrain. Better still, aural delight can be experienced in any drive mode by simply jabbing the “exhaust” button on the R8’s steering wheel.

Prop open the R8’s doors (no gullwing or scissor hinges here) and you’re greeted by the definition of refinement. Audi’s breed of luxury has never focused on lavish interiors, but rather handsome designs and user-friendly interfaces. The 2017 R8 is no exception.

The R8’s angular body is one of the most futuristic shapes ever to roll off a production line.

With full attention being placed on the driver’s quarters, every key performance and convenience function can be controlled without ever removing your hands from the exquisite steering wheel. Thick-rimmed with porous leather, accentuated with a deep red ignition button, and flat-bottomed to ease vehicle entry and exit, the R8’s rudder is a treat to handle. Lift the eyes a few inches and you’ll be staring at Audi’s 12.3-inch digital display, Virtual Cockpit. The solo screen is fully customizable and handles telemetry data, Google Earth, media settings, and drive modes to reduce driver distractions.

Carbon fiber trim is woven around the instrument cluster, door panels, and center stack, meeting leather, Alcantara, brushed aluminum, and high-quality plastics elsewhere. Audi’s gear selector is chiseled into a work of art to complement the ornate climate control tabs that jut from the dash in triplet. Admittedly, passengers have much less to enjoy within the R8’s cockpit, but supercars have always been a selfish indulgence.

Messing with the establishment

At the sub-$200K price point, the Audi R8 V10 Plus invites challenges from McLaren’s 570S, Porsche’s 911 Turbo S, Acura’s NSX, Aston Martin V12 Vantage S, and Mercedes-AMG GT R. Each vehicle is astoundingly quick, attractive, and desirable, but the R8 is the only supercar that’s as thrilling to pummel on a track as it is to dawdle through a neighborhood.

You’ll never be able to cross-shop a minivan with a two-door, but you might just be able to trim your vehicle fleet into an R8 plus-one affair.