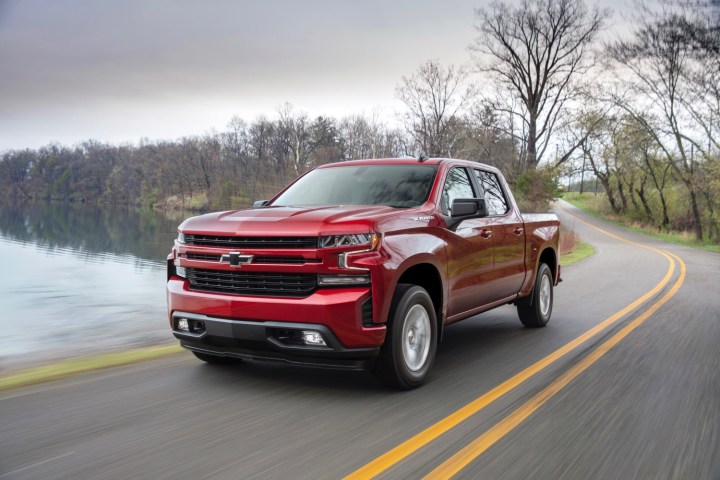 When the 2019 Silverado was unveiled in January at the 2018 Detroit Auto Show, Chevrolet said the redesigned full-size pickup truck would be offered with six engine/transmission combinations, but it only named three. The firm is now ready to fill in some of the blanks.

Rival Ford has offered downsized turbocharged engines for years on its F-150 to improve fuel economy, but now Chevy is taking the concept even further. The standard engine on LT and RST trim levels is a 2.7-liter turbocharged inline-four, making the Silverado the only full-size truck available with a four-cylinder engine. The new engine also features cylinder deactivation, allowing it to shut off two cylinders under light loads to save fuel, and is paired with an eight-speed automatic transmission. Digital Trends drove it and walked away impressed.

While four cylinders may not seem like enough to power a big truck, Chevy says the four-banger delivers 310 horsepower and 348 pound-feet of torque. The company also promises comparable payload capacity to the 3.3-liter and 3.6-liter V6s offered in the F-150 and Ram 1500, respectively, as well as 0 to 60 mph time of less than seven seconds. The Environmental Protection Agency (EPA) rates the engine at 20 mpg in the city, 23 mpg on the highway, and 20 mpg in a combined cycle.

The four-cylinder is the smallest engine offered in a full-size truck but it’s not the most efficient. The turbocharged, 2.7-liter V6 available in the Ford F-150 posts 20, 26, and 22 mpg, respectively, while offering more power. The 3.3-liter V6 also offered returns 19, 25, and 22 mpg while making less power and torque. Shop Ram and the 1500’s 3.6-liter V6 delivers 20 mpg in the city, 25 mpg on the highway, and 22 mpg combined thanks in part to a mild hybrid system.

The other new engine option for the 2019 Silverado, which Chevy previously discussed, is the 3.0-liter Duramax turbodiesel V6. Chevy has declined to discuss horsepower and torque, but says the diesel will be paired with a 10-speed automatic transmission and will be available in early 2019. Despite the Volkswagen emissions scandal, American automakers are embracing diesel for trucks. Ram offered its EcoDiesel for several years, although the model is now on hiatus. Ford recently launched a Power Stroke diesel option for the F-150.

The mechanically similar 2019 GMC Sierra will get the 3.0-liter diesel and the two V8s, but we wouldn’t be surprised if some or all of the other engines offered on the 2019 Silverado found their way under the hood of the Chevy’s sibling truck.

Topics
2023 Mercedes-Benz EQE SUV preview: The EV lineup grows again
Sporty Polestar 3 SUV is an EV guiding star
2023 Kia Niro EV first drive review: Practical doesn’t have to bore you to tears
Nissan wants the 2023 Ariya to be its comeback EV, but the bar has been raised
Cruise’s robot taxis head to Arizona and Texas
Uber says it’s investigating ‘cybersecurity incident’
Nvidia’s Drive Concierge will fill your car with screens
The Uber hack is an outrageous tale of a teen hacking for fun
Tesla to fix window software on 1M of its U.S. cars
Lux and refreshingly livable, Mercedes’ EQE moves EVs mainstream
How to watch Tesla’s AI Day tonight and what to expect
2023 Audi Q4 E-Tron first drive: the predictable and traditional EV SUV we need
We need more 7-passenger EVs, but the 2023 Mercedes EQS SUV has room to improve