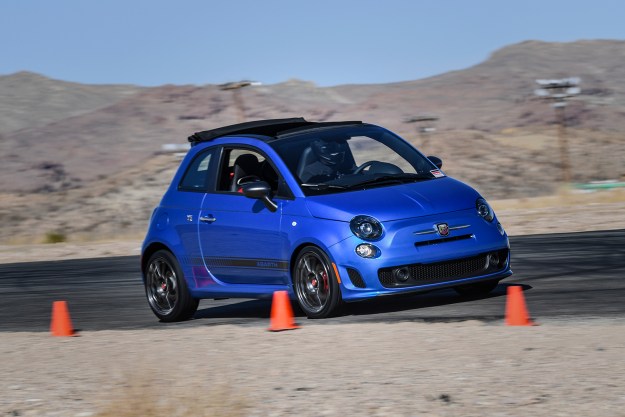 “Fiat’s diminutive hot hatch delivers style and track capability, but a lack of substantial updates sees it falling short in other areas.”

With a few lapping sessions already under our belt, we decided that, this time around, we were really going to wring this thing out for all it was worth.

Coming out of the sweeping, 20-degree banked bowl that comprises turn eight, we mashed the throttle to the floor. The tires gave a cry of protest as we teased the limits of grip, and the engine snarled as it quickly approached its redline. Corner exit in the rear-view, we glanced at the speedometer as we grabbed for fourth gear: 68 miles per hour.

In an era where 700 horsepower has become commonplace, the Fiat 500 Abarth serves as a reminder that “slow car fast” can often provide the kinds of thrills that many assume are reserved for high-dollar performance machines. When we returned to the pits, our palms were just as sweaty as they were a few weeks before when we tore around Autódromo do Estoril in the Lamborghini Aventador SVJ, the current production car lap record holder at the Nurburgring.

To celebrate the 70th anniversary of Abarth, its performance division, Fiat brought us to Streets of Willow course at Willow Springs International Raceway in Rosamond, California, to put the latest track-tuned version of its diminutive hatchback through its paces with some expert instruction from the Skip Barber Racing school. With a 160-horsepower, 1.4-liter turbocharged engine under the hood and a chassis tuned for the rigors of the race track, the 500 Abarth is far from a mere appearance package, and Fiat is as determined as ever to prove it.

“If you really think about what Fiat stands for, it’s all about fun-to-drive vehicles with Italian design”

“If you really think about what Fiat stands for, it’s all about fun-to-drive vehicles with Italian design,” explained Pieter Hogeveen, the director of the Fiat brand in North America. “And here in the US, what’s really interesting is that about 40 percent of our sales are Abarth models. There are not many brands out there that can say that their performance arm carries so much of the sales weight.”

Fiat has sold over one million examples of the 500 worldwide since launching the model in 2007. While the company would like to point to style, quality, and comfort as the core rationale behind the 500’s success, accessibly may be the biggest factor: The 2019 Pop trim starts at just $16,245, while the Abarth promises track-tested performance and durability with Italian flair for $21,995, putting it right in line with the larger (and heavier) Ford Fiesta ST while undercutting the Mini Cooper S by more than $5,000.

The 500 Abarth’s performance intentions are made clear at a cursory glance. Red brake calipers hide behind standard 16-inch aluminum wheels, Koni dampers and performance springs provide a hunkered-down stance, and a dual-exit exhaust system – along with a model-specific wing – bolster the visual drama out back.

Inside, it’s a similar story: A prominent turbo boost gauge, along with a leather-wrapped, flat-bottom steering wheel with contrast stitching and aluminum pedal covers all add to the festivities, while high-back sport seats are also on hand and provide a tangible performance benefit that goes beyond mere aesthetics.

But it’s here where one realizes that the 500’s small footprint and low price tag cuts both ways. Lustrous paint can only do so much for the abundance of cheap plastics on board, and the Fiat’s city car intentions translate to a premium on interior space for both passengers and cargo, the latter of which totals 9.5 cubic feet with the rear seats up, or 26.8 when down. These figures make the 500 smaller inside than its main rivals, which have a bigger footprint.

Although outright thrust isn’t the 500’s strong suit, the sounds, sensations, and responses of a track machine are here.

The pint-sized theme continues with the infotainment system. Although the Uconnect 5.0 system on board operates reasonably well, it’s not exactly feature-rich. Navigation is optional, and while basic connectivity features like Bluetooth, USB, and an auxiliary port are here as standard, the system still does not offer Apple CarPlay and Android Auto functionality. The 5-inch touchscreen also lacks the physical real estate needed to avoid looking low-rent. The Fiesta ST’s available SYNC 3 infotainment system will do a better job of scratching your technology itch than the Abarth’s standard setup.

But outside of those quibbles and a few ergonomic curiosities, the cabin of the 500 Abarth is livable space for the business of spirited driving, even for taller individuals like your author. Just don’t expect any thank you cards from your rear seat passengers.

The 500 Abarth gets its motivation from a 1.4-liter, turbocharged four-cylinder engine that delivers 160 horsepower and 183 pound-feet of torque. It’s bolted to a five-speed manual transmission as standard, while a six-speed automatic is optional. Mini and Ford both offer more powerful alternatives, but the trade-off is that those vehicles are larger and heavier.

Left to its own devices, the automatic serves its purpose well. However, when on a track in a relatively low-horsepower vehicle, gear selection is crucial, and we generally opt for manual control over the transmission’s behavior for that reason. In the 500 Abarth, that control is provided exclusively by the shifter on the center console, and that setup proved to be a fair amount of work to use effectively at speed. Paddle shifters would be a big improvement here. For now, opting for a manual gearbox is probably the better call for anyone who plans to do a significant amount of performance driving with their 500 Abarth.

Although outright thrust isn’t the 500 Abarth’s strong suit, the sounds, sensations, and responses that comprise an entertaining track performer are here. While 64 percent of the 500’s weight is situated over the front end, the Abarth models get summer tires at all four corners which provide admirable grip despite the 500’s inherent desire to understeer at the limit.

And, as the Skip Barber instructors pointed out, the Abarth is tuned to respond well to trail braking – diving toward an apex with reckless abandon while the weight is loaded on the front end gets the best out of the car – along with a dab of rear-end rotation if you’re willing to commit to it.

One thing the 500 Abarth certainly isn’t lacking is style, and if we were configuring a car for ourselves, we’d be looking to leverage that. To our eyes, a Vesuvio black pearl example with a red roof, red mirror caps, and side stripe accents paired with the optional forged 17-inch bronze wheels would be an exceptionally sharp combination.

We’d also opt for the Beats premium audio system, along with the optional leather sport seats, to make cabin a bit more inviting. We’d skip the optional navigation feature, though – you’ll probably end up using your phone through Bluetooth most of the time with this system anyway.

An optional power-operated cloth top is available on all 500 models, including the Abarth, which can be operated at up to 60 mph. While we’d consider springing for it on a Pop or Lounge-trimmed 500, it doesn’t really jive with the mission of this performance model, so we’d probably leave that box unchecked as well. Same goes for the optional power sunroof, which will add weight, raise the center of gravity, and reduce headroom (when closed, of course).

“FCA, as a corporate entity, has a battery of durability tests that all of our vehicles have to go through,” explained Daniel Fry, lead engineer on the 500 Abarth. “In the development of these Abarth models, we’ve also drawn on the knowledge we’ve accumulated from fifteen years of putting SRT badges on cars. Things like autocrossing on a sweltering Texas summer day to ensure we have adequate cooling for turbocharged powertrains, to doing 24-hour, endurance-style track tests to validate durability. We do these kinds of evaluations to make sure that when we put an Abarth badge on a car, it keeps that authenticity.”

It would be easy to dismiss this as a marketing line, but after dozens of laps around Streets of Willow, this fleet of 500 Abarths remained willing and able after hours of back-to-back track sessions throughout the day.

While the 500 isn’t exactly an ideal platform for a performance car, nor will it deliver hair-raisingly quick lap times on a road course, there’s a certain unshakable charm that the 500 Abarth provides which makes up for a lot of its perceived shortcomings. Unless you’re in sanctioned competition, the ultimate goal of any day at the track is to have a good time. And in that regard, the Fiat 500 Abarth does indeed deliver.

The Elder Scrolls Online: How to start the High Isle Chapter