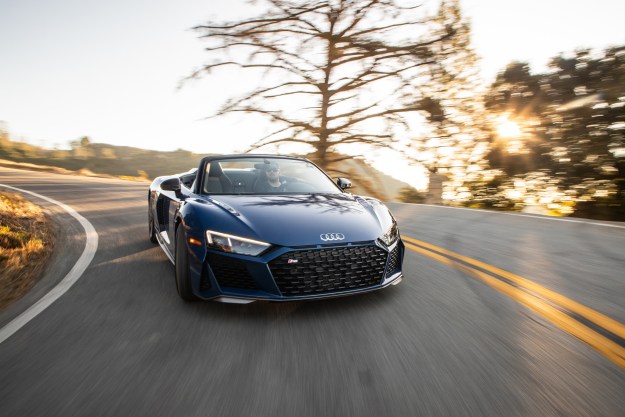 The original Audi R8 is a car that democratized supercars. Here was a high-performance exotic that was usable every day and came with German reliability. That’s long been the car’s greatest strength, or weakness, depending on who you ask. It’s a livable supercar that’s as comfortable idling traffic as it is hitting an apex, but its lack of drama left critics (Ferrari and Lamborghini owners, mostly) calling it a snooze.

This staid supercar was rumored to be cancelled after the current generation, but the head of the R8 program was quick to shoot down that particular rumor, and reveal that there will indeed be another generation of R8.

If that is a fact, the R8 whose key’s I’m holding – the R8 Spyder V10 Performance – is a swan song for the current styling and technology. And swan songs certainly need to be appreciated and enjoyed in their home climate. The cafes, beaches, and surrounding canyon roads of Santa Barbara are an ideal backdrop were the perfect place to get to know the car and find out if an “everyday supercar” truly deserves another generation in the increasingly crowded supercar field.

The flanks of the R8 have been gradually massaged and become more angular as they’ve aged. What started as a rounded organic shape is now a sharply creased origami shaped sports car with grills, intakes, vents, and “character lines” on every panel and plane. This is not to say the new car is unattractive. Far from it. But its current beauty is much more “fashion” rather than the original car’s “style.”

Despite the differences in looks, the actual measurements of the car remain almost exactly the same even after 14 years on the market. There’s now an additional inch of width, while length and height remain virtually the same since the first-generation car. However, the new car has packed on an additional 298 pounds in the intervening generations. It appears no one can avoid plumping up in our later years.

With weight comes dynamic deficiencies, at least in a world operated by logic. But technology operates by its own logic, and here it is able to mask the additional weight like the world’s best pair of Spanx. While the “entry level” R8 gets magnetic shocks, the Performance version I am in trades that for a fixed coil-over sports suspension that has the wonderful ability to mask the modern R8’s heft. Weight can never be wholly denied, however, and there is slight body roll when you push this Teutonic supercar into tight corners at extra-legal speeds.

Of course, this didn’t stop me from blasting around the canyons above Santa Barbara to explore the limits of the Spyder, and after a full day of late braking, tight cornering, and launch control starts, I can happily say that I never found those limits. Not even close.

I’m no professional driver, but then again neither are you, and the limits of the R8 Performance are so high that you’ll only find them on a public road if you’ve made a terrible mistake. That also means you give up nothing in the way of dynamics by going with the Spyder over the Coupe version. That being the case, you might as well enjoy the unlimited headroom and the immediacy of the raspy exhaust note that comes with an open top.

Even with all this capability, I can tell you that canyon carving is not the preferred vocation of the 2020 R8. It is clearly capable of rocketing you up and down mountain passes, but the Audi never feels happy or eager to be doing so. Despite a 602hp V10 monster right behind your chair doling out 402lb-ft of torque at every corner exit, the car subjectively feels like it is tolerating your exuberance rather than egging you on.

Slow things down to 60mph or so on these tight roads, however, and the 2020 R8 lives up to its tame reputation. Treat the car like a (very quick) Audi A3, and you’ll find the R8’s sweet spot. You don’t launch from lights or blast through canyons every day, right? The R8 knows this, and its strength is quickly and confidently cruising at an accelerated but comfortable pace around your neighborhood.

Living with the Audi day in and day out will be less of a digital tech-fest than some other high-end cars. The 2020 R8 comes with no central touch screen, no advanced climate system or heads-up display, and only the driver’s digital instrument panel to display functions like navigation and vehicle settings. The R8 is clearly focused around the driving experience of the driver. Luxury touches come second or not at all. This is yet another aspect of the car that’s divisive.

One component that is both driver-focused and luxurious is the “S tronic” dual-clutch transmission. This seven-speed unit executes instantaneous gear changes and comes with a few high-tech surprises. Beyond the aforementioned launch control (which is terrifying in the best way), there is also the ability to automatically change down to the lowest gear possible for your given speed.

While I aggressively brake into a tight corner, I can hold down the left shift paddle, and the transmission takes me down two, three, or even four gears so that I am primed to be in the engine’s power band as I finish braking and get back on the accelerator at the corner exit. It is exhilarating to get right, though less so when you time it wrong.

All that is, of course, when you are using the transmission’s manual mode. While in full automatic, the gear changes can be imperceptible. However, I did encounter a disconcerting behavior when transitioning from partial throttle cruising to mashed-pedal passing. Once you slam the pedal down, there is a non-exaggerated pause of one full second before the transmission shifts into an appropriate lower gear. At which point, I was ultra-violently pushed back in my seat, and the R8 blasts off to triple digit speeds.

This massive pause in acceleration is alarming at first, annoying thereafter, and utterly out of character with the otherwise taught and composed R8. In discussion with the Audi team behind the car, they disclosed that this pause was a characteristic of any dual-clutch transmission.

Because even gear numbers are on one transmission shaft and odds on another, if the transmission needs to shift from seventh to fifth gear, it cannot simply do that because they are on the same shaft.

Instead, it needs to shift to (but not engage) sixth, then shift to fifth and engage that gear. This whole process takes one agonizingly full second. This can all be avoided by switching into manual mode before an overtaking procedure and clicking down the gears yourself.

After a day of experiencing the 2020 R8 Performance Spyder all over the canyons and city streets of Santa Barbara, I’m left with the realization that the R8 is indeed an everyday car – for both good and ill. Here is a car that is capable in the extreme, but yet prefers not to show that off. Take it on a grocery run around town and it will be all smiles. Take it on a spirited drive, and it will merely obey. The key to the new R8 is to stick it in manual, silence the extra-loud exhaust, and cruise around a beach town with the top down. You’ll love every minute of it.