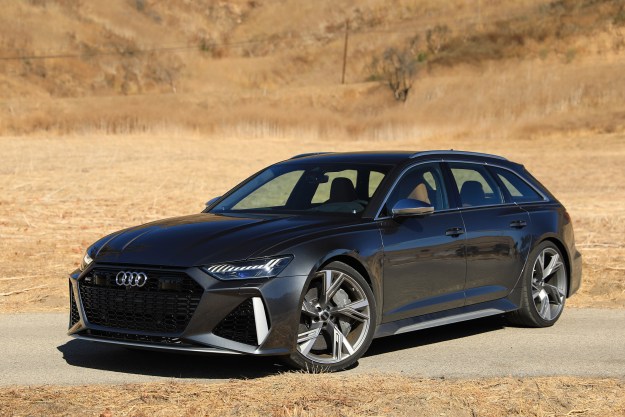 “Audi masterfully blends performance and practically in the RS 6 Avant”

Modern wagons have faced an uphill battle to capture the hearts and minds of American buyers, and that goes double for high performance models. Just ask Dodge, who built fewer examples of the Magnum SRT8 in its final year than Ferrari produced of the $700,000 Enzo supercar, or Cadillac, whose CTS-V wagon didn’t last more than a generation despite the fact that it enjoyed near-universal praise.

With the recent shift in American consumer tastes away from passenger cars in favor of high-riding crossovers and SUVs, Audi probably isn’t expecting a massive windfall from their decision to bring the all-new, fourth generation RS 6 Avant to the North American market for the first time in its eighteen-year history. Still, enthusiasts tend to be an vocal bunch, and addressing their demands can be seen as a long-term investment.

“We can’t comment on the volumes,” Audi’s director of communications, Mark Dahncke, told us in regards to the number of RS 6 Avants they plan to bring to North America. “But I will say that in my time with Audi, I’ve never had more people contact me about a car. People have been begging us to bring this over for a while.”

Fast wagons have always had a strong cult following, and over the years the RS 6 Avant has served as a great example of why. It’s a pragmatic choice that isn’t boring, it offers performance capability without the hassles of a sports car, and fast wagons tend to have more character than their sports sedan equivalents.

But does the all-new RS 6 Avant continue that tradition, or has something been lost in its journey across the pond? We headed to Malibu, California to find out.

Part of the allure of a fast wagon is often tied to the sleeper vibe – for many, the idea of dusting the flashy roadster in the next lane with a vehicle that looks purpose-built for schlepping kids to soccer practice has a certain appeal to it. It’s something that past iterations of RS 6 Avant have exemplified, but with the fourth generation car, Audi wanted to take a different approach.

“The A6 Avant and RS 6 Avant share just three body components – the front doors, the roof, and the tailgate,” says Audi exterior designer Andreas Joachim Koglin. “Our aim was to shift the design closer to supercars like the R8, or even a Lamborghini.”

Even at a glance, it’s obvious that the RS 6 Avant is no typical family hauler. Riding on optional 22-inch wheels (21s are standard) with a hunkered-down stance, gaping air intakes, and bulging fenders that extend the car’s overall width by 3.1 inches, the RS 6 Avant looks undeniably menacing. Although it isn’t a massive departure from the aesthetic of its RS 7 stablemate, the Avant’s design looks like more of a complete thought than its four-door counterpart, yet it forfeits nothing in terms of style.

Inside, the car’s performance aspirations are made clear by the flat-bottomed steering wheel and RS-specific front seats, but overall it’s a more understated approach when compared to the exterior. The high-quality materials and switchgear show a clear nod toward the luxury aspect of the RS 6 Avant’s mission, and the design showcases the automaker’s current penchant for uncluttered minimalism.

Nearly devoid of buttons, the center stack is dominated by the two touchscreens that comprise Audi’s latest MMI interface, with the upper 10.1-inch display handling infotainment duties while the 8.6-inch unit below it primarily controls the HVAC system. Audi’s Virtual Cockpit is on hand as well, a 12.3-inch configurable display behind the steering wheel which offers traditional instrument readouts as well as performance data, navigation instructions, and other real-time information.

The rear bench seat offers a 40:20:40 split, and there’s 20 cubic-feet of storage space behind it. Fold the rear seat of the RS 6 Avant down and that capacity expands out to a crossover-like 59.3 cu-ft.

While we know that Audi has several key aspects of the grand touring part of the equation covered, all the muscular proportions and Alcantara wouldn’t be worth much if the RS 6 Avant didn’t have the mechanical hardware to back it up. Accordingly, Audi dropped a twin-turbocharged 4.0-liter TFSI V8 into the engine bay that’s good for 591 horsepower and 590 pound-feet of torque.

It’s clearly a performance-oriented powertrain, but Audi also took efficiency into consideration here: A 48-volt mild hybrid system is equipped as well, which allows for low-speed electric operation under certain circumstances, along with cylinder on demand technology that can turn off cylinders 2, 3, 5 and 8 under low-load driving situations in higher gears to further reduce the RS 6 Avant’s thirst for gasoline.

Gear changes are dispatched by an eight-speed automatic, and the grunt is sent to all four corners through Audi’s Quattro all-wheel drive system, a setup which can be further enhanced with an optional sport differential that comes as part of the Dynamic Plus package.

The car rides on sport-tuned air suspension as standard, while Dynamic Ride Control is optional. The latter is a steel spring setup that hydraulically links three-way adjustable dampers together in diagonally-opposed pairs, and a central valve system sends the hydraulic pressure where it needs to go within the system to mitigate body roll and pitch – an approach that’s similar to what you’d find in a McLaren 720S.

Stopping power is provided by massive ten-piston calipers up front, which clamp down on 16.5-inch steel rotors. Optional ceramic rotors (also part of the Dynamic Plus package) stretch the front rotor diameter to 17.3 inches, and together with the 14.6-inch carbon ceramic discs in the rear, provide a hefty unsprung weight savings of 75 pounds versus the standard system.

Our drive pointed us into the Malibu Hills by way of the Pacific Coast Highway, a route which would allow us to experience the RS 6 Avant under everyday circumstances and put the Audi through its paces on some of the most demanding roads in the western United States.

While the boosted V8 comes to life with the bark of a muscle car, our testers were outfitted with European-spec exhaust systems that quickly hushed the proceedings. Audi promised us that cars bound for North America will get North America-specific exhaust tuning, which should make the soundtrack noticeably livelier in that regard.

With the drive mode set to Comfort, an extended jaunt down PCH revealed a surprisingly compliant ride despite the 22-inch rollers outfitted to all the test cars. In this relaxed setting the engine and gearbox are hushed and focused on efficiency, quickly finding their way into the upper gears to keep the revs low.

Aside from occasional grabbiness from the massive carbon ceramic stoppers near the top of the pedal, the overall experience is not unlike a typical, well-appointed Audi, but the hum of that hopped-up V8 is a subtle reminder of the savagery that can be summoned by your right foot at any given moment.

With all-wheel-drive and peak torque available from just over 2000 RPM, the RS 6 Avant pulls with brutal authority from any non-felonious pace, but despite its near-4600-pound curb weight, it’s not just a straight-line performer – this thing can dance.

A significant part of RS 6 Avant’s handling prowess must be credited to the rear-axle steering, which is optional on European-spec cars but will be standard on all examples headed to North America. By turning the rear wheels in the opposite direction of the fronts at lower speeds, it effectively reduces the car’s wheelbase in tight corners, allowing it to change direction with a surprising level of enthusiasm. At higher speeds, the rear wheels turn in phase with the fronts to enhance stability.

The optional sport differential equipped to all of the test cars also deserves some praise. Compared to other recent RS models we’ve tested, this system did a noticeably better (and less distracting) job of transferring power between the wheels when needed.

On twistier, more technical roads like Latigo Canyon and Mulholland, we actually preferred the standard air suspension over the more stiffly-tuned DRC system, as the additional compliance translated to greater stability at those speeds. However, it’s not hard to imagine that opting for DRC would pay dividends on road courses and faster stretches of tarmac.

The 2020 Audi RS 6 Avant left us with very little to complain about, quite frankly. Some might prefer Mercedes-AMG’s current fast wagon offering in the U.S., the E63 S – it’s a bit rowdier and more emotional in general, though we can’t help but wonder if the two will be in closer parity once Audi outfits their U.S.-spec exhaust system to RS 6 Avants bound for the states.

Like the Audi, the E63S is extremely fast and an agile handler for its size – and the AMG probably has the edge over the RS 6 in a straight line – but your author prefers the Audi’s styling and tech suite over the AMG’s.

Pricing for the RS 6 Avant hasn’t been announced yet, but we expect it to be similar to the RS 7.

To maximize the sinister look of the RS 6 Avant, we’d choose the optional matte black with matte aluminum accents, along with the 22-inch five-spoke trapezoid design wheels finished in titanium.

Inside, we’d opt for perforated Valcona leather seating, Bang and Olufsen premium audio, and the RS Design package, which adds in Alcantara-wrapped surfaces and contrast stitching.

In terms of performance hardware, the Dynamic Plus package – which includes the aforementioned sport differential, carbon ceramic brakes, and extends the top speed to 190 mph – is a must, as is the RS sport exhaust system.

Yes. If you’re an enthusiast who is considering a luxury-performance crossover, a sports sedan, or a fast SUV, you owe it to yourself to get some seat time in an RS 6 Avant before taking the plunge – you’re likely to be become a convert.