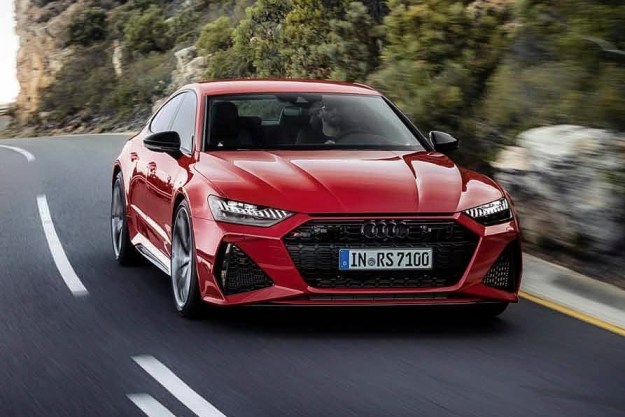 I steered the 2020 Audi RS 7 to the side of a country road in rural Germany to quickly take a phone call. After hanging up, I put my phone upright in the center console, signaled, and mashed the gas pedal to get back on the road while checking out how quickly the car accelerates from a stop. The phone flew until it bounced off the the rear seatbacks, and ended up in the passenger-side footwell. If this is the effect the RS 7’s V8 engine has on a OnePlus, imagine what your organs feel like every time you floor it.

The V8 in question is a twin-turbocharged, 4.0-liter unit that delivers 591 horsepower and 590 pound-feet of torque. Those figures place the regular RS 7 on nearly the same level as the Performance-badged variant of the outgoing model, and right in between the two V8-powered versions of the Mercedes-AMG GT Four-Door, one of its main rivals. An eight-speed automatic transmission and Quattro permanent all-wheel drive send the V8’s output to the four wheels, allowing for a phone-pelting, 3.6-second sprint from 0 to 60 mph, and a top speed of 190 mph when buyers tick the right boxes on the list of options.

It’s easy to get caught up in numbers when you’re talking about performance. Top speed and 0-to-60-mph times are quantifiable, and are measures a majority of us are familiar with. We have an idea — no matter how vague or how precise — of what’s fast and what’s not. These statistics only tell the whole story when we’re talking about a car built for the drag strip, where going fast in a straight line is the only thing that matters, and the RS 7 is not one of those machines. Audi Sport engineers put a tremendous amount of work into fine-tuning the chassis to make it addicting to drive on a twisty road.

Starting with the second-generation A7, they made the track wider, installed bigger brakes on both axles, and dialed more response into the steering system. The standard air suspension was given a thorough overhaul, too. The end result is a fastback that feels glued to the road, even when you’re racing through the sharp bends of a former hill-climbing course in Germany, and that nonchalantly approaches its top speed on the unrestricted section of Germany’s Autobahn. Slowing down to the legal limit on an American highway is just a matter of holding down the brake pedal for a few seconds. No stress, no fuss, and no unpleasant surprises. In this regard, the new RS 7 exceeds the high expectations set by its predecessor.

Engineers put a tremendous amount of work into fine-tuning the chassis to make it addicting to drive on a twisty road.

It should easily beat the last-generation model when it comes to fuel economy, too. I’m going to let you in on a little secret: The RS 7 is a hybrid. It’s not a plug-in model you can drive without burning a drop of gasoline, though those are on the way, but it receives a 48-volt alternator-starter that acts like a generator to harvest the energy created while braking and channel it to a lithium-ion battery pack. The system dispenses electricity to power the stop-start system, among other features, and it helps keep gas mileage in check in a variety of real-world driving conditions. Cylinder-on-demand technology, which turns the V8 into a fuel-sipping four-cylinder, also helps the RS 7 use less gasoline.

From the driver’s seat, there are several ways to tell the RS 7 apart from the A7 it’s based on, even if the engine is turned off. The steering wheel is RS-specific, and the front seats are more supportive. The digital, driver-configurable instrument cluster – a feature democratized by the smaller TT – also gets a new look, and there are additional driving modes to choose from. Audi calls the four standard profiles efficiency, comfort, auto, and dynamic, respectively. They’re all fairly self-explanatory. The last two are known as RS 1 and RS 2, respectively. They’re fully customizable, so the driver can dial in a comfortable suspension and dynamic steering, and leave the rest in automatic. It’s a cool use of technology.

The infotainment system is the same one you’ll find in other recent additions to the Audi range, including the A6 and the Q8. Called MMI Touch Response, it’s primarily displayed on a 10.1-inch touchscreen neatly integrated into a piece of black trim that stretches across the dashboard. We’ve praised its sharp graphics in the past, and we like the ability to move icons around by simply poking the screen. It’s quick to respond to inputs, and it’s compatible with both Android Auto and Apple CarPlay. As a bonus, Audi doesn’t make its customers pay for either; rival BMW charges for Apple CarPlay, and continues to resist Android Auto for a multitude of reasons. Porsche is Android-free, too, though it might soon change its mind.

The dual-screen infotainment system is less daunting than it sounds because the menus are relatively shallow and well-labeled.

There’s a second, 8.6-inch screen right below. It’s an extension of the infotainment system used to change the climate control settings. It also lets the front passengers manually write an address into the navigation system using handwriting recognition technology. The dual-screen setup is less daunting than it sounds, with menus that are relatively shallow and well-labeled, and it gave stylists the freedom to draw a clean dashboard that’s nearly button-less. It’s an elegant design that suits the car well.

Speaking of design, Audi Sport co-director Oliver Hoffmann points out that members of the team in charge of reinventing the RS 7 listened carefully to the feedback they gathered from motorists who purchased the original car – and from those who didn’t. Almost everyone asked for a more aggressive design. While the first RS 7 kept a low profile, the wide-bodied new model leaves no one confused about what its main mission in life is. The Quattro coupe built to dominate the rally scene during the 1980s inspired designers.

“I bet you’ve never seen a race car wearing chrome trim,” pointed out Tobias Höss, one of the designers who worked on the RS 7, as he gave Digital Trends a look at the car before its official introduction. He brings up a good point; the lifted, Chevrolet-based Rolls-Royce Corniche that famously competed in the 1981 edition of the Paris-Dakar Rally kept a lot of its chrome parts, but it’s an exception to the rule.

Car-spotters will also notice the grille is lower than on the A7, and the air intakes chiseled into the front bumper are bigger. Out back, the bumper gains a black insert that wraps around a pair of oval exhaust tips. This time, you can’t mistake the RS 7 for an S7, or a regular A7.

Inside, the biggest point of contention was the original RS 7’s four-seater layout. It’s a grand tourer, Audi defiantly argued, so it should have four individual seats instead of a more mundane rear bench. Most customers disagreed, so the fastback now comes standard with five seats, though the four-seater configuration remains available. The RS 7 is just as spacious as its generous dimensions suggest. I’m 5-foot-11, and I can comfortably sit behind a driver of the same height. Leave both rows of seats up, and you’ve got 19 cubic feet of trunk space to fill. Folding the rear seats down unlocks 49 cubes.

The RS 7 won’t arrive until the 2020 model year, so it hasn’t been crash-tested by the National Highway Traffic Safety Administration yet. We know Audi will make a long list of electronic driving aids available, including a 360-degree camera that gives the driver a clear view of what’s around the car, adaptive cruise control (which works as advertised), and blind-spot monitoring. Like other new Audi models, the RS 7 will offer a four-year, 50,000-mile warranty.

The best of many worlds

Quick, dapper, and smart, the second-generation Audi RS 7 is exactly what a grand tourer should look like in the 2020s. It’s not as low-key as its predecessor, so you won’t fly under the radar this time around, but I think that’s a good thing. The louder, meaner design is a good match for its performance credentials. Above all, it brings together phone-slinging performance, crossover-rivaling practicality, and intuitive technology in a package you can live with every day. The downside? Pricing for the U.S. market hasn’t been announced yet, but we’re betting it’s not going to be cheap.