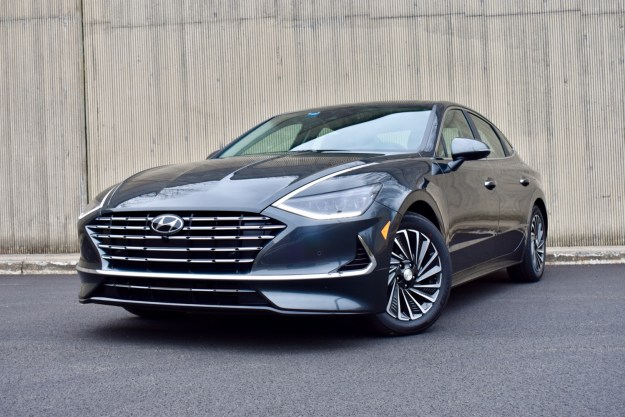 “The 2020 Hyundai Sonata Hybrid is a comfortable, spacious highway cruiser.”

The 2020 Hyundai Sonata is a near-perfect midsize sedan. It has excellent road manners and tech features you won’t find in any other car in this price range. However, while the stuff on the dashboard is impressive, the stuff under the hood isn’t. The engines available at launch are merely adequate.

Timed to go on sale in June, the 2020 Hyundai Sonata Hybrid will be offered in Blue, SEL, and Limited trims. Our test car was the top Limited model, which gets all of the headline tech features, including a digital instrument cluster, Digital Key smartphone control, and a solar roof that can help recharge the battery pack. Hyundai hasn’t released pricing yet, but expect the hybrid model to carry a premium over the standard Sonata, which is priced between roughly $24,000 and $34,000.

During our time with the Sonata, we found that Hyundai has a few more tricks up its sleeve. Is better gas mileage the missing piece of the Sonata puzzle?

It takes a sharp eye to spot the differences between the Sonata Hybrid and the standard Sonata. The differences are limited to a new grille, wheels, and rear spoiler. Even those changes were made for aerodynamic efficiency, not aesthetics. Hyundai was already happy with the existing Sonata exterior design.

The Sonata already had a fairly extroverted look, after all. Designers gave it a sleeker profile than the average sedan, as well as trick “Hidden Lighting Lamps” that turn the hood into a laser light show. These extra lighting elements extend back from the headlights, and blend in with the car’s chrome trim when switched off.

Despite the addition of a battery pack, Hyundai said the Sonata Hybrid has the same amount of trunk space as the standard Sonata. That also works out to more trunk space than the Toyota Camry Hybrid, but less than the Honda Accord Hybrid. The Sonata Hybrid also has more front and rear legroom than the Camry and Accord, but the Japanese hybrids offer substantially more rear legroom.

The driver’s seat of the Sonata Hybrid is a great place to be. The dashboard touchscreen and center console storage trays are perfectly placed, the steering wheel is just the right size, and the car offers excellent outward visibility.

The standard infotainment setup includes an 8.0-inch touchscreen with Apple CarPlay and Android Auto. Limited models get a 10.25-inch touchscreen, along with a 12.3-inch digital instrument cluster and a head-up display. Screen graphics are crisp and clear, and the main touchscreen has a nice swiping action for switching menus. Hyundai didn’t go overboard with screens, though. Designers also included analog controls for functions like audio volume, where a knob works better than a swipe.

The digital instrument cluster allows for an upgraded blind spot monitoring system, which automatically shows the view from exterior cameras when you tap the turn signals. It’s a simple but helpful feature, and a step above what competitors offer. However, it’s also an optional extra. Standard driver aids include adaptive cruise control, lane keep assist, autonomous emergency braking, and automatic high beams. These features are also standard on the rival Honda Accord Hybrid and Toyota Camry Hybrid. But Hyundai also made rear cross traffic alert standard. That feature is optional on the Toyota and not available on the Honda.

The Sonata Hybrid can also be upgraded with Lane Follow Assist. As the name suggests, it follows the road rather than waiting for the car to start veering out of its lane before intervening. This feature worked well during a previous drive in the non-hybrid Sonata in Arizona, but didn’t seem as composed on the New York roads where we drove the hybrid. The steering wheel twitched constantly as the system made small steering inputs, as if someone had given the computers a double shot of espresso.

Another tech feature that carries over from the non-hybrid Sonata is Hyundai’s Digital Key. Standard on the SEL and Limited trim levels, this lets the driver use a smartphone in place of a conventional key fob. While some automakers offer remote unlocking or engine start through an app, only Hyundai, Lincoln, and Tesla currently allow drivers to get in and drive away using only a . The Digital Key can also be remotely transferred to other people, in case you want to let someone borrow your car. The feature is only compatible with certain Android phones right now.

One tech feature the Sonata Hybrid misses out on is Remote Smart Parking Assist, which you may have seen in Hyundai’s Boston-accented Super Bowl ad. The feature, which allows the car to pull in and out of tight parking spaces by itself, is available on the standard Sonata but not the hybrid. It needs to be recalibrated for the hybrid powertrain, and will be added at a later date, according to Hyundai.

The hybrid powertrain is a good fit for the Sonata’s laid-back character, but don’t expect impressive numbers.

The Sonata Hybrid uses a 2.0-liter four-cylinder engine assisted by a single electric motor. Total system output is 192 horsepower. That’s just 1 hp more than the base engine for the non-hybrid Sonata, and substantially less than the Honda Accord and Toyota Camry hybrids.

Unlike Honda and Toyota, Hyundai has kept a conventional transmission as part of its hybrid system. The Sonata Hybrid’s six-speed automatic has a software feature called Active Shift Control, which uses the electric motor to add or subtract torque on the transmission’s input shaft. That provides quicker shifts (meaning less interruption in power while accelerating) and better gas mileage, according to Hyundai.

Using a conventional transmission is significant because it makes the Sonata Hybrid feel more like a normal car. Power is applied in a much more linear fashion than in the Honda or Toyota hybrid systems, and the transfer between electricity and gasoline is smooth.

The hybrid powertrain is a good fit for the Sonata’s laid-back character, but don’t expect impressive numbers.

Hyundai also did a good job calibrating the driving modes. Sport provides the right amount of extra urgency, and Eco isn’t the penalty box it is in most other cars. Hyundai also included a Smart mode, which automatically toggles between the other modes depending on conditions. But not everything was so finely tuned.

Hyundai brought in Albert Biermann, former boss of BMW’s M performance division, to make its cars more exciting. But Biermann must have been on vacation when the Sonata Hybrid’s suspension tuning was done. This car’s handling is more Buick than BMW. The steering wheel feels like it isn’t connected to anything, and body roll in sharp corners is so severe that the car feels like it’s going to tip over.

We noticed similar tendencies in the non-hybrid Sonata, but the twistier roads at this testing location made those tendencies even more apparent. The Sonata Hybrid had a better showing on highways, where its floppy suspension yielded one of the smoothest rides of any midsize sedan. This is clearly a car designed for road trips and commuting, not curvy roads. If you want a sporty Sonata, check back when the N-Line model goes on sale.

Perhaps the number would have been higher if we were able to make better use of the Sonata’s solar roof. Solar cells are used to charge the 12-volt battery (to keep it from draining while the car is parked) and the hybrid system’s battery pack, allowing for greater use of electric power. The roof can add 2 miles of driving range per day, according to Hyundai, but persistent clouds meant it didn’t get much use. Drivers in sunnier climes may get better results.

The non-hybrid 2020 Sonata received a Top Safety Pick rating for the Insurance Institute for Highway Safety (IIHS), but the organization did not provide a specific rating for the hybrid model. The National Highway Traffic Safety Administration (NHTSA) hasn’t rated any 2020 Sonata models.

Hyundai’s 10-year, 100,000-mile powertrain warranty and five-year, 60,000-mile limited warranty are unmatched by Honda and Toyota. The 2020 Sonata Hybrid is a new model, but Hyundai has a good overall reputation for reliability.

If you want the most tech in your Sonata Hybrid, you need to go with the top Limited trim level. It’s the only trim level available with the solar roof, as well as the triple threat of a 12.3-inch instrument cluster, 10.25-inch touchscreen, and head-up display.

The Limited’s extra features add weight, which is why it isn’t as fuel efficient as the entry-level Blue model. Hyundai forces buyers to choose between gas mileage and tech, unfortunately.

The hybrid powertrain improves the 2020 Sonata, but doesn’t transform it. Driving dynamics are roughly the same as before and, while you do get better gas mileage, it’s important to keep expectations in check. The Sonata also drives more like a regular car than its Honda and Toyota rivals, which some buyers might prefer.

The best things about the 2020 Sonata Hybrid carry over from the non-hybrid version. The highlights include a comfortable ride, advanced driver aids, and a well-designed infotainment system. The hybrid’s solar roof is a neat piece of tech that could improve real-world efficiency, but it’s dependent on weather conditions.

Yes. The 2020 Hyundai Sonata Hybrid is a good car that just happens to be a hybrid.