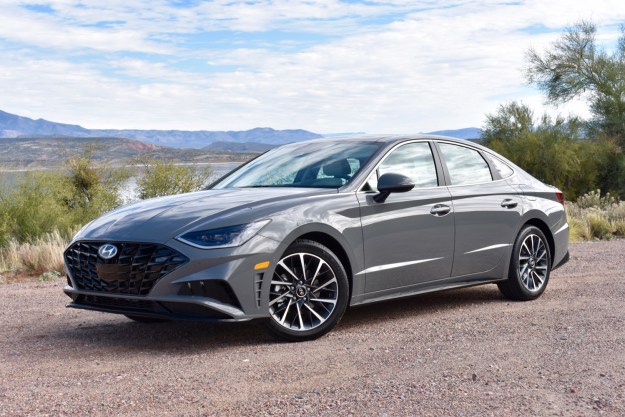 “The 2020 Hyundai Sonata brings high-end tech to the mainstream in a stylish package.”

For over two decades, Hyundai has tried to get midsize sedan buyers to take its Sonata seriously. Few cars have improved over time as much as the Sonata, which went from an also-ran to a serious Honda Accord/Toyota Camry competitor. But as Hyundai has worked to perfect the Sonata, buyer tastes have changed.

Car buyers are increasingly flocking from sedans to crossovers, and while Hyundai has many crossovers in its lineup, it hasn’t given up on the Sonata. The 2020 Hyundai Sonata looks like nothing else with four doors and a trunk, and includes tech features you won’t find on other midsize sedans.

We fled winter weather for sunny Scottsdale, Arizona, where Hyundai arranged a test drive of the 2020 Sonata. The redesigned sedan starts at $24,330 for the base SE trim level. From there, the price climbs to $26,430 for an SEL model, $28,380 for the SEL Plus. The range-topping Limited trim level starts at $34,230.

One advantage sedans have over crossovers is style. It’s easier to make a good looking sedan than a good looking crossover, even if many automakers choose not to. Hyundai went all out on the 2020 Sonata, not only letting its designers draw more exciting shapes, but incorporating new tech as well.

When designers wanted to make a car look cooler, they used to tack on tail-fins or big chrome bumpers. But modern safety regulations and the wind tunnel have made that impossible, and make it harder to make a distinctive design. So Hyundai designers focused on something that won’t ruin the car’s aerodynamics or maim pedestrians: lights.

The 2020 Sonata debuts Hyundai’s “Hidden Lighting Lamps.” They’re lighting elements that look like chrome trim when switched off, but provide a Tron-like light show when switched on. On the Sonata, the lamps run along the hood, connecting the headlights with trim pieces encircling the doors, creating an uninterrupted shape Hyundai designer Haksoo Ha calls the “dynamic lasso.” Giddyup.

Hyundai also tried to make the Sonata sleeker than before. The front end is shaped like the prow of an alien spaceship, and Hyundai also describes the Sonata as a “four-door coupe,” not a sedan. The trend started with the Mercedes-Benz CLS-Class, but has also migrated to cheaper models like the Volkswagen Arteon.

The idea is to make a car with the style of a two-door coupe, but usable back seats. The result is usually a car that still looks like a sedan, but with less headroom.

That’s definitely the case with the 2020 Sonata. Hyundai’s ambitious makeover leaves this sedan with less front and rear headroom than its predecessor. The driver and front passenger get more legroom, but rear-seat passengers get less. Trunk space is unchanged, at least.

Hyundai’s ambitious makeover leaves this sedan with less front and rear headroom than its predecessor.

While the 2020 Sonata isn’t more spacious than its predecessor, it does compare well to other midsize sedans. The only area where the Sonata lags behind the competition is rear legroom. Only the Honda beats the Hyundai on trunk space, however.

Even the most humdrum modern cars come loaded with tech, but the 2020 Hyundai Sonata offers new features not often seen outside luxury vehicles.

One of those is Hyundai’s Digital Key, which lets drivers use a smartphone in place of a traditional key fob. While some automakers offer smartphone apps that can unlock doors or start the engine, only Tesla, Lincoln, and Hyundai currently allow owners to drive away using only a key fob. Hyundai owners can also remotely transfer their Digital Key to other drivers, allowing them access to the car using a phone.

Sonata owners will want to hang onto the key fobs, though. Hyundai’s Remote Smart Parking Assist lets the Sonata maneuver in and out of parking spaces with no one inside – something previously done only by Tesla.

Instead of getting in, the driver holds down buttons on the key fob (one for forward, one for reverse), while standing a maximum of 10 feet away from the car. Hyundai plans to make the feature work through smartphones in a future software update, a spokesperson told Digital Trends.

Hyundai’s Digital Key lets drivers use a smartphone in place of a key fob.

The rest of the 2020 Sonata’s tech is a cut above other midsize sedans. An 8.0-inch touchscreen is standard, but buyers can upgrade to a 10.25-inch screen that looks snazzy in its minimalist housing and features a slick swiping action. Apple CarPlay and Android Auto are both standard, and CarPlay will automatically expand to fill out the bigger screen.

The Sonata is also available with a 12.3-inch digital instrument cluster, with snazzy graphics that change with the different driving modes. As with the Hyundai Palisade, an upgraded blind spot monitoring system shows the view from mirror-mounted cameras in the instrument cluster. It’s a helpful feature that, unlike Honda’s rival LaneWatch system, shows the view from both sides, and doesn’t take over the central touchscreen to do it.

Hyundai isn’t the first automaker with automated lane centering, but its Lane Follow Assist system is one of the best. As the name suggests, it follows the road rather than waiting until the car is veering out of its lane to intervene.

While you can feel it working through the steering wheel, it doesn’t feel like the car is possessed, as some other systems do.

The 2020 Hyundai Sonata engine lineup consists entirely of four-cylinder engines, with front-wheel drive and eight-speed automatic transmissions. That’s standard for this segment, but these engines are more than meets the eye. Even the base 2.5-liter engine has an impressive array of efficiency-focused tech. It produces 191 horsepower and 181 pound-feet; adequate numbers for a car of this size.

Hyundai didn’t have 2.5-liter Sonatas on hand for use to drive, instead putting its best foot forward with the optional 1.6-liter turbocharged four-banger. This is the first engine to get Hyundai’s continuously variable valve duration (CVVD) system, a technology that has never been used on a production car before.

The Sonata will serve its most likely buyers – everyday commuters – well.

Many cars are equipped with variable valve timing, where valves open and close in order to create the optimum mix of fuel and air in each combustion chamber. CVVD also varies valve duration – how long the valves stay open. This gives engineers another way to tune the engine for better efficiency.

The 1.6-liter engine produces 180 hp and 195 lb-ft of torque. That falls short of the optional engines available in other midsize sedans, which tend to be bigger. However, it’s clear the Sonata isn’t meant for thrills.

Its strengths are a quiet cabin, comfortable ride, and smooth power delivery from the 1.6-liter engine (the CVVD system works invisibly, and turbo lag is virtually nonexistent). The Sonata will serve its most likely buyers – everyday commuters – well.

Those numbers compare favorably to other midsize sedans, although the base Toyota Camry and Honda Accord achieve 34 mpg combined and 33 mpg combined, respectively. The Sonata’s 1.6-liter engine makes the most of its smaller displacement, outperforming the larger optional turbo-fours in the Accord and Nissan Altima on gas mileage.

The outgoing Sonata was available with hybrid and plug-in hybrid powertrains. Hyundai has confirmed that the hybrid will return in 2020, and has already set a land speed record with the car. But further details are being kept under wraps.

Like other Hyundai models, the 2020 Sonata has a 10-year, 100,000-mile powertrain warranty, and a five-year, 60,000-mile, limited warranty, making for longer coverage periods than the competition.

Hyundai has a fairly good reputation for reliability, but because the 2020 Sonata is all-new, it’s hard to make any predictions. That also means crash test results from the Insurance Institute for Highway Safety (IIHS) and National Highway Traffic Safety Administration (NHTSA) aren’t available at this time.

Our ideal 2020 Sonata would be a top-of-the-line Limited model. The Limited is the only model to get the Remote Smart Parking Assist feature and camera-based blind spot monitoring. It also includes notable tech features available on lower trim levels, including the 10.25-inch touchscreen, 12.3-inch digital instrument cluster, head-up display, and Bose 12-speaker audio system.

The 2020 Hyundai Sonata is an overachiever. Most automakers know that customers will settle for a car that is safe, reliable, and cheap to own. While the most recent incarnations of the Honda Accord, Toyota Camry, and Nissan Altima try to offer a bit more, they look conservative compared to the Sonata.

Hyundai offers more tech than any other car in the segment, wrapped in standout styling. Hyundai pulled out all the stops not only to convince customers to buy a Sonata instead of a competitor, but to stick with a sedan instead of a crossover.

Yes. If you want an affordable car that’s packed with tech, look no further.