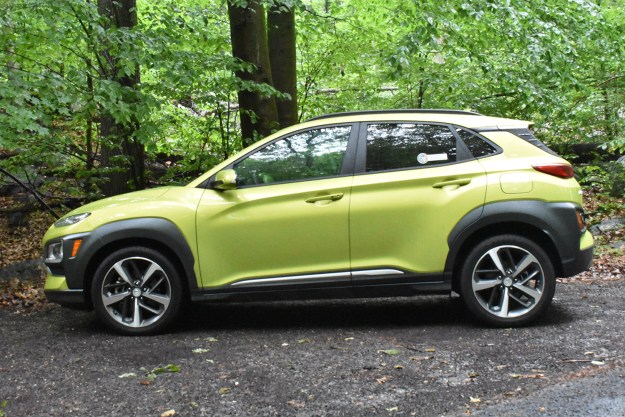 “Don’t let the freakish styling fool you, the 2019 Hyundai Kona is a great small car.”

Whether it’s more cargo space or the availability of all-wheel drive, the reasons for buying a crossover seem to be all about practicality. But it can be as much of an emotional decision as a practical one. Buyers want something more exciting than a traditional sedan or hatchback.

Many crossovers fail to deliver on that promise. They can be just as boring as the cars they now handily outsell, with worse gas mileage and handling, to boot. That’s certainly not the case with the 2019 Hyundai Kona.

Hyundai swung for the fences with the Kona’s exterior styling, creating a vehicle that looks like nothing else on the road. But does the Kona have substance to match its style? To find out, we grabbed the key fob to a range-topping Ultimate AWD model. With an as-tested price of $30,005 (including destination) our Kona was a big step up from the base front-wheel drive Kona SE, which starts at $20,970. But the Ultimate model gets lots of extra features, including an 8.0-inch touchscreen, head-up display, leather seats, and a more powerful engine.

What unusual eyes you have

Most cars have a pretty well defined face. The headlights are the “eyes,” and the grille is the “mouth.” With the Kona, Hyundai’s designers subverted expectations. The headlights are divided into two elements, and they don’t function the way you might think. The thin upper strips, which most closely resemble traditional headlights, are actually the driving lights. The chunky lower structures, which look more like fog lights, are the actual headlights. It’s similar to the arrangement on the Jeep Cherokee, but because Hyundai didn’t have to adhere to 70 years of styling tradition, it could shape the rest of the Kona to match.

The Kona blurs the line between crossover and hatchback. The long hood and helmet-shaped roof give the Kona a sleek, car-like silhouette while the gray plastic body cladding and jacked-up ride height add a dose of ruggedness. A design like this will always be a matter of taste, but Hyundai deserves credit for trying something different.

The interior is much more conventional. The only unusual design touches in our test car were contrast stitching and some trim pieces in the same Lime Twist color as the exterior. The interior is still a nice place to be, though. Controls are well placed, and the seats are comfortable. Outward visibility is very good as well. Drivers expecting the commanding driving position of a traditional crossover will be disappointed, however. On the highway, semi trucks feel just as intimidating as they would in any small hatchback.

The Kona blurs the line between crossover and hatchback, and its styling reflects that.

Materials aren’t fancy, though they’re of appropriate quality for a car in this price range. Thankfully, Hyundai didn’t try to jazz things up with easily-smudged piano black trim, instead going for textured plastic that looks like it will stand up well to abuse.

Our test car had the optional 8.0-inch touchscreen display (lower-level models get smaller screens). The screen was easy to reach on its perch atop the dashboard, and the menus were sensibly laid out, although it was sometimes a bit slow to boot up when starting the car. A small LCD screen in the analog instrument cluster supplements the main screen, along with a head-up display. Standard on the Ultimate, it’s the cheap kind that projects onto a small plastic screen, rather than the windshield itself. But the display is easy to read, and doesn’t block the driver’s outward vision.

The Kona comes standard with Apple CarPlay and Android Auto compatibility, with wireless phone charging available as an option. The conveniently located wireless-charging pad was just about the only safe place to put a phone, as they turned into projectiles when left anywhere else.

Like most other vehicles in this category, the Kona offers passenger and cargo space that are closer to a small hatchback than a traditional crossover. Among its competitive set, the Kona offers respectable overall passenger volume, although the Honda HR-V offers more. Headroom and rear legroom are also a bit tight compared to many competitors.

With its rear seats up, the Kona’s cargo area quickly filled up during a weekend shopping trip, and the overflow had to be placed on an unoccupied passenger seat. It’s hard to imagine, say, taking a road trip in the Kona and finding enough room for four people and their stuff. Granted, this is a problem common to all vehicles in this segment. It shows that buying a tiny crossover like the Kona is more about wanting something more stylish than an ordinary hatchback, not about needing extra utility.

At least the Kona’s petite proportions make it nice to drive. It feels agile and eager, with responsive steering and taut suspension that does a great job of controlling body roll in corners. The Kona wasn’t designed to be a performance car, but it’s still lots of fun to pilot down a twisty road, as well as a good ally when scything through urban traffic. However, the stiffness of the suspension makes for a very uncomfortable ride on anything but perfectly smooth pavement.

The Kona wasn’t designed to be a performance car, but it’s still lots of fun to pilot down a twisty road.

A big part of our test car’s charm was the optional 1.6-liter turbocharged four-cylinder engine. The four-banger produces 175 horsepower and 195 pound-feet of torque, and is coupled to a seven-speed dual-clutch transmission. Lower-level Kona models get a 2.0-liter naturally-aspirated four-cylinder engine making 147 hp and 132 lb-ft, with a six-speed automatic transmission. Hyundai also sells a Kona Electric model, but it’s only available in certain electric-car-friendly regions of the country at this time.

The turbocharged engine offers more than enough power for a vehicle of this size, and that power comes on quickly without a hint of turbo lag. But it’s the dual-clutch transmission that really sets the Kona apart. Most competitors use conventional torque converter automatics or continuously variable transmissions (CVTs) for added refinement. But the Hyundai dual-clutch gearbox’s snappy shifts gave the Kona a sporty feel, even compared to fun-loving small crossovers like the Mazda CX-3 and Honda HR-V.

All-wheel drive 1.6-liter turbo Konas like our test car are rated at 27 mpg combined (26 mpg city, 29 mpg highway) by the EPA. Over a week of (admittedly exuberant) driving on a mix of highways, back roads, and city streets, we were only able to average 23.7 mpg according to the car’s trip computer.

The Hyundai Kona has numerous rivals, but we’ve narrowed it down to the top three.

Honda HR-V (base price: $21,515): The Honda offers more passenger and cargo space than the Hyundai, and more standard driver aids. Unlike the Kona, the HR-V can be had with adaptive cruise control, although the feature is an optional extra. The HR-V is decently fun to drive, but lack of power and a dim-witted CVT hold it back.

Mazda CX-3 (base price: $21,435): The CX-3 has the moves to match the Kona on a twisty road, but the Hyundai’s optional turbocharged engine has much more power. Mazda’s rotary infotainment controller is intuitive, but the CX-3 offers substantially less interior space than the Hyundai.

Nissan Kicks (base price: $19,585): The Kicks offers more interior space than the Kona, but it’s missing one important feature: all-wheel drive. Nissan made the Kicks front-wheel drive only to lower the cost, but all-wheel drive is one of the main reasons for buying a crossover. The Kicks isn’t as exciting to drive as the Kona, but it does have a more comfortable ride. Styling is much more conservative, but that may be a plus for some buyers.

Hyundai offers a 10-year, 100,000-mile powertrain warranty and five-year, 60,000-mile transferable limited warranty constitute some of the most generous coverage in the business. While the Kona is fairly new (it went on sale as a 2018 model), Hyundai has a good overall reputation for reliability, and the Korean brand scored well in the most recent J.D. Power Initial Quality Study.

The Kona comes standard with forward collision avoidance, lane keep assist, and a driver attention monitor. Blind spot monitoring and rear cross traffic alert are standard on all but the base SE trim level, while the Ultimate trim level gets a pedestrian-detection feature. However, adaptive cruise control isn’t available at any price.

The Kona received the highest Top Safety Pick+ rating from the Insurance Institute for Highway Safety (IIHS), but only with the optional frontal pedestrian detection system and LED headlights (both features are standard on Ultimate models like our test car). The National Highway Traffic Safety Administration (NHTSA) gave the Kona a five-star overall safety rating.

In this case, the name Ultimate is appropriate. If you want all of the tech the Kona has to offer, you need the top trim level. The Ultimate gets the 8.0-inch touchscreen, wireless phone charging, and heads-up display, as well as pedestrian detection and automatic high beams. It also incorporates notable features from the lower-level Limited model, including leather seats, a sunroof, and the 1.6-liter turbocharged engine/dual-clutch transmission combo.

Yes. The Hyundai Kona’s extroverted styling, energetic driving dynamics, and sensible tech set it apart from other similarly sized crossovers, and provide justification for choosing the Kona over a cheaper small hatchback. However, if passenger and cargo space are a priority, a more traditional crossover like the Hyundai Tucson is a better option.