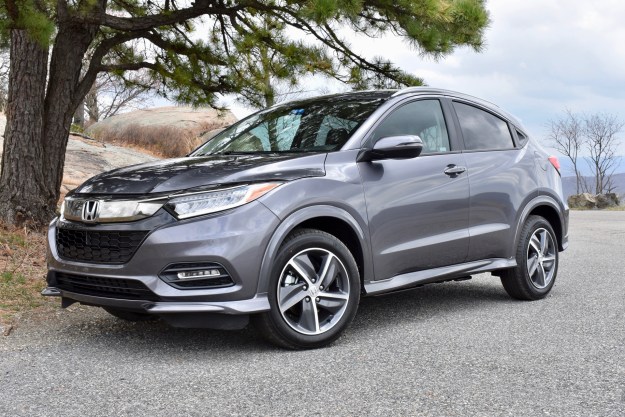 “With clever interior packaging, the 2019 Honda HR-V makes maximum use of its small footprint.”

Honda pioneered small crossovers with its CR-V, but as that model has gotten bigger, the Japanese automaker has found room to slot another utility vehicle beneath it. The Honda HR-V made its debut for the 2016 model year, and it got a handful of updates for 2019. It competes in a booming segment that includes vehicles like the Hyundai Kona, the Mazda CX-3, and the Nissan Kicks.

Our 2019 Honda HR-V test car was a Touring model. New for 2019, this trim level adds LED headlights and fog lights, navigation, and a power driver’s seat to the standard kit from lower trim levels. The Touring is the top-of-the-line HR-V. While the cheapest HR-V (a base LX model with front-wheel drive), starts at $21,515, our all-wheel drive Touring stickered at $29,535. Both prices include a mandatory $995 destination charge.

Thinking outside the box

Exterior styling is an important element for car shoppers in the market for a subcompact crossover like the HR-V. In a market segment populated by oddities like the Hyundai Kona and Toyota C-HR, it takes a lot to stand out. The HR-V does just that, without compromising functionality.

A big chrome girder across the front and lots of exterior detailing gives the HR-V a familial resemblance to other current Hondas. Designers also hid the rear door handles high in the rear pillars, at the confluence of the roofline and a sculpted line that sweeps up from lower in the bodywork. It’s a distinctive touch that also helps emphasize the sweep of the roof.

The HR-V’s many exterior curves are the polar opposite of the boxy styling seen on most crossovers. The result is a vehicle that looks more like a puffed-up hatchback than a traditional crossover, which is appropriate, since the HR-V shares basic underpinnings with the Honda Fit.

On the inside, the HR-V has average front-seat space, with the best rear-seat legroom among the compact crossover set. The front seats are comfortable, with a decent amount of side bolstering to keep occupants in place while cornering. But the rear-seat cushions felt flat and unsupportive.

A camera mounted on the passenger’s side rearview mirror is pointed at the driver’s blind spot, with feed display on the central dashboard screen.

The interior design isn’t as imaginative as the exterior, but we still found its simple look appealing. The materials also felt high quality, and the steering wheel had a perfect diameter and thickness.

The HR-V also offers a good setup for hauling cargo. It offers 23.2 cubic feet of trunk space with four adults on-board; only the Nissan Kicks has more cargo space with the rear seats up. It also borrows the “Magic Seat” setup from the Fit, allowing the rear seats to fold flat with the pull of a latch. With the rear seats down, the Honda’s 55.9 cubic inch cargo area is tied with the Ford EcoSport for biggest in the segment.

The big news for 2019 is the availability of a 7.0-inch touchscreen display with two crucial features: Apple CarPlay/Android Auto integration, and a volume knob. However, the new touchscreen isn’t available on base LX models. Our Touring test car also had the optional 4.2-inch driver-information display, which is available on EX and higher trim levels. Honda places two USB ports (only one works for phone functions) in a cavity beneath the center console and far out of the driver’s reach, helping to dissuade phone use while driving.

The touchscreen’s graphics are fairly basic, but the menus are laid out logically and the screen itself is very responsive. However, its relatively small size and distance from the driver make hitting the right touch point a bit tricky. That’s why the addition of a volume knob for 2019 (it was also recently added to the Civic and the Fit) is a big deal. It is easier to twist the knob without looking than it is to poke at a screen.

For 2019, EX and higher trim levels get the Honda Sensing suite of driver aids, including autonomous emergency braking, adaptive cruise control, lane keeping assist, and lane departure warning. We were impressed by the adaptive cruise control’s quick responses and smooth acceleration and deceleration, but lane keeping assist underperformed. It got confused by gentle curves on highways, seeming to lose track of where the lanes were and intervening unnecessarily. At other times, it limply tugged at the steering wheel without enough effort to actually shift the car back into its lane.

Honda’s LaneWatch feature is also standard on EX and above trim levels. A camera mounted on the passenger’s side rearview mirror is pointed at the driver’s blind spot, with feed display on the central dashboard screen. That way you can always see if a car is in your blind spot, although the camera feed does override radio and navigation displays. However, Honda will discontinue LaneWatch in the near future in favor of blind-spot monitoring systems that use flashing lights rather than a camera view.

Honda has a well-deserved reputation for making small, basic cars fun to drive, and we felt a bit of that magic in the HR-V. The little crossover felt nimble, with lively steering and a suspension system that worked valiantly to keep body roll in check. The HR-V was genuinely fun to fling around back roads, although we couldn’t help thinking that we would have had more fun in a conventional hatchback with a lower center of gravity and less weight to sharpen the handling. The HR-V handles quite well for a crossover, but it can’t match its Fit cousin, or the larger Civic. Think of the HR-V as a Fit in a fat suit.

Automakers launch a new bite-size crossover every week, meaning the HR-V has plenty of rivals.

While the HR-V was fun to drive on twisty roads, buyers will likely spend more time on commuting on freeways. That’s bad news for Honda, because freeway grinds are not the HR-V’s strong suit. The ride is uncomfortable on anything but smooth pavement, doing nothing to hide road imperfections. Cabin noise is also fairly high by modern standards. Then there’s the engine.

Honda only offers the HR-V with a 1.8-liter four-cylinder engine, making 141 horsepower and 127 pound-feet of torque, with standard front-wheel drive or optional all-wheel drive. On paper, that puts the HR-V roughly in the middle of its segment in power output, but in the real world the Honda just feels plain underpowered. Merging onto highways or overtaking requires wringing the engine’s neck, and always elicits an unpleasant scream from under the hood. Part of the blame lies with the continuously variable transmission (CVT). These transmissions are usually a buzz-kill, but the HR-V’s CVT was particularly slow and dimwitted when it came to putting power to the pavement.

Driving an underpowered car on the highway isn’t much fun. Wringing every ounce of power out of a small engine on winding roads can be – but only with a manual transmission that gives the driver complete control. However, Honda dropped that option (it was previously available only on front-wheel drive HR-Vs) for 2019. Honda did provide paddle shifters for the 2019 HR-V’s CVT, but without any real gears to shift, it just wasn’t the same.

It seems like automakers launch a new bite-size crossover every week, meaning the HR-V has plenty of rivals. We’ve narrowed it down to a few key competitors.

Hyundai Kona (base price: $21,035): Honda took some risks with the HR-V’s styling, but Hyundai took even more with the Kona. Under the radically styled skin, the Kona offers less passenger and cargo space than the HR-V. But the Kona gets more power, and a longer warranty. Hyundai also offers an all-electric version with an EPA-rated 258-mile range, albeit only in certain states.

Mazda CX-3 (base price: $21,435): If you really like driving, go for the CX-3. It’s 2.0-liter four-cylinder engine makes just a smidge more horsepower (148 hp) but a lot more torque (146 lb-ft) than the HR-V’s engine, and it works with a geared six-speed automatic rather than a CVT. Handling is even sharper than the Honda’s. Like Honda, Mazda offers a 7.0-inch touchscreen, but the CX-3 is also available with a head-up display. A rotary controller also makes accessing infotainment functions easier.

The downside is drastically less interior space, and a low seating position that doesn’t feel crossover-like at all. The CX-3 is a great car, but buyers looking for a true crossover will be disappointed.

Nissan Kicks (base price: $19,585): Like the CX-3, the Kicks blurs the line between hatchback and crossover. Interior space is comparable to the HR-V, and the Nissan offers a tall, truck-like driving position. But the Kicks isn’t available with all-wheel drive, which is one of the main reasons for getting a crossover. While the ride is comfortable, the Kicks isn’t as entertaining to drive as the HR-V, and has even less horsepower and torque.

Nissan caps pricing lower than Honda, but that’s not the whole story. The Kicks comes standard with autonomous emergency braking, which is only available on higher-level HR-V models. But Nissan doesn’t offer adaptive cruise control on any trim level, while Honda includes it on EX and higher HR-V trim levels.

Honda offers a three-year, 36,000-mile basic warranty and five-year, 60,000-mile powertrain warranty. The HR-V earned an above-average reliability rating from Consumer Reports based on past model years, and Honda has a very good overall reputation for reliability.

The HR-V earned a Top Safety Pick rating from the Insurance Institute for Highway Safety (IIHS), with top scores in all crash tests and the front-crash prevention test, but only “average” scores for the headlights and child-seat anchors. The National Highway Traffic Safety Administration (NHTSA) gave the HR-V a five-star overall rating.

We take two steps down from our range-topping Touring model to the EX. That means ditching niceties like leather seats and LED headlights, but it also means saving $3,420 (or more, if you can live without all-wheel drive).  The EX has all of the essential tech features, including the 7.0-inch touchscreen with Apple CarPlay/Android Auto, Honda Sensing, and LaneWatch. It also includes heated front seats and a moonroof.

Cars like the 2019 Honda HR-V were virtually unheard of a decade ago, but now it seems like every automaker needs to have one. The HR-V distinguishes itself from its many rivals simply by being good at its job. It offers plenty of space for passengers and cargo, with good safety ratings, at a reasonable price. Exterior styling and lively handling give the Honda a little extra character. More power and a better transmission would be appreciated, but Honda has crafted a great all-rounder.

Yes. The Mazda CX-3 may be nicer to drive, and the Nissan Kicks may be cheaper, but the 2019 Honda HR-V does everything well.