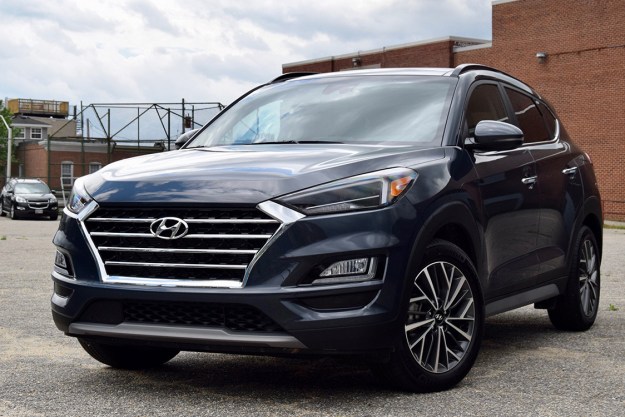 “Hyundai’s Tucson balances luxury and high-tech features with the poise of an adept ballerina.”

The strategy automakers are taking with crossovers and SUVs will be familiary to any halfway-decent restaurant that’s scrambling to lure millennials in with three different versions of avocado toast. In other words, it’s not enough to have one good SUV these days. Now brands are expected to have multiple offerings covering various segments. Numbers-wise, the 2019 Hyundai Tucson might not have the same history or sales figures as the Honda CR-V and the Toyota RAV4, but plain avocado toast does get boring after the first couple times, and the Tucson’s side of luxury is as great of an addition as a poached egg.

To stay current in one of the most popular segments on the market, Hyundai has updated its best-selling SUV in a few crucial areas. There’s more technology than before, updated styling that makes the Tucson better looking, and a new dashboard design. It’s all in the name of keeping up with the competition, the majority of which is either all new or heavily updated.

Hyundai offers the Tucson in seven trims, ranging from the entry-level SE all the way up to the plush Ultimate. The base SE is one of the more affordable compact SUVs, gloating with a starting price of $24,245 with destination. Adding all-wheel drive to any trim is an additional $1,400. Our 2019 Tucson test vehicle was the range-topping Ultimate with all-wheel drive, carrying a price tag of $33,995.

Other compact SUVs, most notably the RAV4 and the CR-V, have gone for sharp edges, but the Tucson’s new exterior design is classical with a modern twist. There are minimal edges to be found on the Tucson’s body, instead there are gentle curves at both ends. While Hyundai has chosen to pursue more youthful designs with its other SUVs, the Tucson is the elegant grown-up that continues to age gracefully. Must be all the avocado toast. Exterior styling updates include new headlights, refreshed taillights, revised front and rear fascias, and updated wheel designs. The changes don’t completely reinvent the Tucson – you can still tell it’s a Hyundai from down the road – but they successfully stop the SUV from going stale.

Combining upscale materials with a first-class look, the new Tucson does a fine job of mimicking a high-end SUV. The 2019 model year sees the introduction of a new dashboard design that now features a touchscreen that sits atop of the center console instead of one that nestled into it. Once again, it’s not a major distinction. But it’s a step toward making a classier cabin. Leather upholstery, heated and ventilated front seats, a heated steering wheel, an 8-inch touchscreen and wireless device charging, which are all standard on the Ultimate trim, help with the high-end feel, too.

Thankfully, Hyundai let the Tucson’s semi-luxurious qualities shine, putting the sporty side of things on the backburner.

It’s not just the features, the fit and finish, or the build quality – which are all excellent – but the feel of the features that impresses the most. The leather seats in the Ultimate trim are downright amazing, allowing for long trips without any of the sore bum drawbacks that plague drivers over the age of 21. Interior space for passengers is noteworthy, as there’s a slim chance that anyone will complain about having to spend time in any one of the Tucson’s five seats. The cabin is quiet too, keeping road and wind noise to a minimum while closely losing the battle to the motor, letting a minimal amount of engine noise in.

On the inside, the 2019 Tucson now has an infotainment screen that’s tacked on top of the dashboard. You’ll enjoy a 7-inch touchscreen on the majority of Tucsons – the Ultimate gets an 8-inch unit – that’s running Hyundai’s excellent infotainment system, along with Apple CarPlay and Android Auto. Hyundai’s infotainment system is one of the few that doesn’t require a full day to wrap your head around, but if you’re more comfortable with your smartphone it’s nice to have the integration there.

Other standard tech features on the base Tucson include a trio of 12-volt outlets, remote keyless entry, a 3.5-inch multi-information display, and a front USB port. For an entry-level trim, it’s a decent set of equipment. Hyundai makes moving up to one of the higher trims extremely attractive, as those really do come with some great features for a relatively minor increase in price.

Higher trims get navigation, a second-row USB port, wireless charging, and a 4.2-inch LCD display in the instrument cluster. Sure, all of those features are nice, but the real jewel in our tester’s repertoire was the Infinity audio system. The highly customizable, eight-speaker audio system kicks out tunes with impressive quality that usually isn’t found at this price level. It bumps, jumps, and thumps. By the time you know it, you’ve already finished jamming out to your favorite album.

So many automakers these days try to make do-it-all crossovers that are supposed to balance comfort, agility, and the odd day of light off-roading. Usually, this Tiger Mom mentality results in a glaring compromise somewhere. Thankfully, Hyundai lets the Tucson’s semi-luxurious qualities shine, consciously putting the sporty side of things on the backburner.

The Tucson’s plush ride, excellent list of tech features, and upscale cabin are hard to beat in the compact segment.

For the most part, the 2.4-liter’s meager figures don’t inhibit the driving experience. Around town, 181 horsepower is fine, it’s only on the highway where problems arise. Patiently wait for a gap to overtake a Honda Civic coupe that’s in the far left lane with its hazards on and by the time the Tucson finally gets into action the gap has disappeared. That, for any urban dog owners, is as frustrating as those “Please Don’t Curb Your Dog” signs on a 1-by-1 patch of barren dirt.

Fuel economy figures are lackluster at best, too. Despite making less power than its prime rivals, the Tucson’s figures also trail behind those of its competitors. Our AWD Tucson with the 2.4-liter engine is rated by the EPA to get 21 mpg in the city and 26 mpg on the highway. After roughly 400 miles, our Tucson registered 24 mpg, which is close to the 23 mpg combined rating. With the most powerful engine and all-wheel drive, both the CR-V and the RAV4 are rated to get up to 30 mpg combined. In a package that’s as refined as the Tucson’s, having a lackluster engine is a waste of natural talent.

While the engine isn’t anything to write home about, the rest of the driving experience is on the cusp of being luxurious. The ride is superb, allowing you to careen over railroad tracks at speeds you wouldn’t normally dare and feel nothing but a slight judder. Even on Baltimore’s worse, and some of the roads are truly awful here, the Tucson sheltered us from knowing just how large that last pothole we squarely ran over was.

Clearly, we think two of the Tucson’s main competitors are the Toyota RAV4 and the Honda CR-V. Up against those two, the Tucson has a major advantage when it comes to pricing. Prices for the RAV4 range from $26,595 to $35,995, while Honda’s CR-V starts at $25,395 and tops out at $35,195. The base Tucson carries a price tag of $24,245 with an Ultimate AWD trim being priced at $33,995. Pricing, though, is the only place where the Tucson pulls a clear lead over the other two crossovers.

As we pointed out earlier, both the CR-V and the RAV4 have larger cargo areas, can get better fuel economy, and have more powerful engines. Toyota’s latest generation for the RAV4 saw the SUV get a revised hybrid model – for those seeking the best of the best in fuel economy – and a new off-roading ready Adventure trim. The CR-V, well, it’s just one of those rare machines that can walk the walk and talk the talk.

Hyundai continues to offer one of the best warranties on the market. The compact SUV comes with a five-year, 60,000-mile limited warranty, a 10-year, 100,000-mile powertrain warranty, and a seven-year, unlimited-mile anti-perforation warranty. The automaker also includes five years and unlimited miles of roadside assistance.

Adding more safety features was a major part of Hyundai’s revisions for the 2019 Tucson.

The Tucson fared well in crash tests conducted by the National Highway Traffic Safety Administration (NHTSA) and the Insurance Institute for Highway Safety (IIHS). The NHTSA gave the Tucson a five-star rating overall for both front- and all-wheel-drive models. The IIHS named the SUV a Top Safety Pick, matching the Honda CR-V and surpassing the Toyota RAV4.

Adding more safety features was a major part of Hyundai’s revisions for the 2019 Tucson. It wasn’t like the compact crossover was on the back foot in the beginning, but it now has more than ever before. All Tucsons come with forward-collision warning, lane-departure warning, automatic emergency braking, and lane-keeping assist as standard. Move up to the Value trim and blind-spot collision warning and rear cross-traffic collision warning are included as standard. A surround-view monitor is standard on the Limited and up, while the Night and Ultimate get smart cruise control with stop and go, as well as forward collision-avoidance assist with pedestrian detection.

Luxury is one of the Tucson’s strong suits. So we’d shoot toward the higher end of the spectrum and, after some internal squabbles, land on the Limited trim. The leather upholstery is nice, but the awesome Infinity audio system, surround view monitor, LED lighting, wireless charging pad, and heated steering wheel are what really sell the package. All-wheel drive is probably worth the $1,400 if you live in an area that sees snow often.

There’s only one thing the Tucson left us yearning for: better fuel economy. Currently, the available 2.4-liter four-cylinder doesn’t have the grunt to match competitors, nor does it have competitive fuel economy figures. If the engine made more power, it would be easy to overlook the less-than-ideal fuel economy figures. Not interested in fuel economy or all-out performance? The Tucson’s plush ride, excellent list of tech features, and upscale cabin are hard to beat in the compact segment. From getting an artisanal avo toast at a local coffee shop in the heart of the city to driving 300 miles to go on a rural getaway, the Tucson makes the commute, no matter how short or long, easier to tolerate.

Yes. As long as fuel economy or performance aren’t high on your priority list, there’s just so much that the Tucson gets right. At its price point, that you’re likely to fall in love after only a short jaunt.