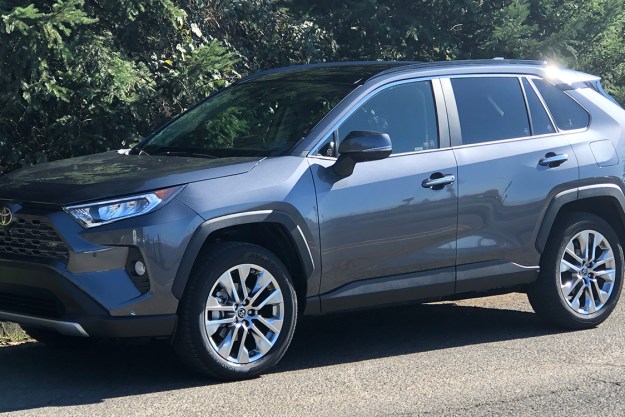 Since its introduction to the U.S. market in 1996, the Toyota RAV4 has been a hit. Sales grew steadily for the first 10 years, then spiked as the crossover and SUV revolution really took hold. Toyota sold 427,170 examples of the RAV4 in America last year, beating all other compact crossovers.

The reason for the RAV4’s popularity is easy to identify. Toyota has delivered a high-quality, value-packed crossover at an affordable price point. As buyers switched their allegiance from compact cars to compact crossovers, they did not switch their brand allegiance. Camry and Corolla buyers became RAV4 buyers.

The 2019 Toyota RAV4 has been freshly redesigned to meet a wider range of needs, and is built on Toyota’s advanced TNGA platform. The new, fifth-generation RAV4 is available in five trim levels ranging from the basic, entry-level LE to the range-topping Limited. Toyota wisely kept the Adventure trim that comes with an array of off-road features. There’s also a hybrid option coming later this year with four trim levels of its own.

Pricing starts at $26,595 for the most basic RAV4 LE FWD trim with destination charges included. Gasoline-powered RAV4 models can cost up to $35,995 before you pick out any option packages. The hybrid model is more expensive, priced between $28,795 and $36,795. As tested, our Limited trim with a list of options carried a sticker price of $39,536.

The RAV4 follows the prevailing design sensibilities of the current era, with sharp cut-lines, a somewhat blocky front end, and a large grille. It looks more rugged than most of its competitors. A short band up on the C-pillar gives the floating roof effect that is popular across almost all SUV brands right now. In short, the RAV4 offers up-to-date looks that won’t embarrass you in the parking lot of your workplace, your gym, or your driveway. One point to note: the RAV4 comes with standard LED headlights and daytime running lights, so you get the benefit of great lighting, and a fully modern look.

Inside, Toyota put an emphasis on tech rather than on traditional luxury, and it kept the same high level of build quality that RAV4 buyers expect. Depending on the trim level, the RAV4 comes with fabric or SofTex leatherette seating surfaces. Real leather makes an optional appearance on the shifter and on the steering wheel, but that’s it. However, unless you really care about authentic leather, the SofTex is pretty good. At the higher trim levels, the front seats are heated, and if you spring for the optional Limited Grade Weather Package, the front seats are both heated and ventilated, and the outboard rear seats are heated. The RAV4 borrows its reclining rear seats from more upscale SUVs. It’s a feature that comes standard on all trim levels.

In the back, the RAV4 offers a generous 37.6 cubic feet behind the rear seat, and 69.8 cubic feet with the rear seat folded. The hybrid will likely have less rear space due to the batteries. Either way, its trunk space is about average for the segment. To add context, the Honda CR-V (one of the RAV4’s closest competitors) boasts 39.2 cubes with five occupants on board, and 75.8 cubes with the rear seats folded flat. The Mazda CX-5 checks in at 30.9 and 59.6, respectively.

In a smart move, Toyota made tech the focus of the redesigned RAV4. At all trim levels, the RAV4 supports Amazon Alexa, Apple CarPlay, Siri Eyes Free, Scout GPS, Google Assistant, and Bluetooth streaming capabilities. You’ll need to shop at the competition’s dealerships if you want Android Auto, however; Honda, Nissan, and Mazda all offer it.

In a smart move, Toyota made tech the focus of the redesigned RAV4.

The base trims offer a 7.0-inch Entune 3.0 touchscreen interface, and the top Adventure and Limited trims get an 8.0-inch screen that’s an inch bigger than the one fitted to the top-spec CR-V. The infotainment system is well-designed, with a set of real buttons on the sides for instant response to common requests like the audio or map view screens.

The screen also displays the rear-view camera image. Base trims get a basic camera with projected path information, while higher trims get a panoramic view with dynamic guidelines. If you buy the Limited Grade Advanced Technology Package, you can upgrade that to a 360-degree camera with perimeter scanning and a curb view, which is nice for parallel parking.

The driver information display comes in two styles depending on your trim level. Lower trims have a 4.2-inch screen nestled between the analog gauges, while the top trims use a 7.0-inch screen that you can program to your liking. One fun display to mention is the AWD monitor, which gives you a real-time view of how much engine power is going to each of your four wheels. It lights up like a Christmas tree on snowy roads.

Toyota also offers many option packages specialized for the different trim levels, including a new Digital Rearview Mirror and Qi-compatible wireless smartphone charging on higher grades. At the top Limited grade, the Advanced Technology Package includes the 360-degree camera, keyless entry on all doors, a foot-gesture-activated power liftgate, and Qi-compatible wireless charging in a little cubby where the console meets the dash.

There’s one gasoline engine in the 2019 RAV4. It’s a 2.5-liter, naturally aspirated, four-cylinder with 203 horsepower and 184 pound-feet of torque. Whether you select front-wheel drive or one of the two all-wheel drive systems, you get an eight-speed automatic transmission. Performance is good, but not noticeably higher than competing SUVs.

The available AWD systems are broken out by trim. The base LE and XLE trims get a standard system capable of sending up to 50% of engine power to the rear axle when it’s needed. On the Adventure and Limited trims, buyers get an enhanced system with dynamic torque vectoring that enables the RAV4 to send engine power to either rear wheel. The enhanced AWD system also includes a rotary controller on the console to allow the driver to select Mud & Sand mode, Rock & Dirt mode. Separate buttons engage Snow mode and hill descent control.

The biggest improvement in the 2019 RAV4 is in its driving demeanor, and that’s directly attributable to the new chassis platform. The old RAV4 had a tendency to bounce in the rear end. A heavy pothole hit with a rear tire could give rear seat passengers a serious kick. The new chassis feels more solid and smoother, the way an SUV should feel. In a week of driving, including in winter conditions, the RAV4 showed no bad habits.

Equipped with AWD, the RAV4 Limited that we tested is EPA-rated at 25 mpg city and 33 mpg highway, with an average of about 28 mpg. That’s average for the segment, and it’s pretty much what we found. Without trying to drive in any particular way, we saw 28.2 mpg over the course of our week. Buyers who select a FWD RAV4 should see slightly better fuel economy. Fuel economy figures on the upcoming hybrid have not yet been released.

The primary rivals for the RAV4 are the 2019 Nissan Rogue and the 2019 Honda CR-V. Although the RAV4 sold more in the last few years, in many years the Rogue outsells the RAV4. The Honda is always a close third. The fourth-place crossover is the Jeep Cherokee, and it sells about half the volume of the RAV4.

When it comes to features, you just have to decide what you care about. Nissan offers ProPILOT Assist, which helps steer the Rogue around corners, but the RAV4 offers lane tracing assistance, which is similar but less developed. Honda offers the LaneWatch system, which gives you a camera view of the right-hand blind spot when you activate the right turn signal. That’s a nice feature no one else has. Yet apart from a few specific tech features, all the market leaders are comparable SUVs in price and performance.

Toyota backs every RAV4 with a standard warranty of 36 months or 36,000 miles. Powertrain, rust-through, and restraint systems are covered for five years or 60,000 miles. Additionally, Toyota provides a free three-year trial of Safety Connect, which automatically alerts emergency services in the event of a crash, acts as a stolen vehicle locator, and provides 24-hour assistance through a call center.

The most important development with the new generation of the RAV4 is that Toyota Safety Sense 2.0 is now standard across all trims. From the base LE to the top Limited, RAV4 buyers get adaptive cruise control, pre-collision mitigation with pedestrian detection, lane departure control, automatic high beams, road sign recognition, and lane tracing assist.

If you’re in need of a refresher course, road sign recognition uses the forward-facing cameras and places the most recent speed limit sign on the driver information display. It will also display stop, yield, and do not enter signs, but how often do you look down at the gauges with one of those coming up?

Lane tracing uses gentle steering inputs to keep the RAV4 in the center of its lane. You can engage lane tracing only when the adaptive cruise control is active. The system works with the cameras, identifying the yellow and white lane marking lines, but it’s also capable of following the vehicle ahead if no lane markings are visible. This feature works, but remember that it’s a far cry from a self-driving vehicle. You still have to keep hands on the wheel and eyes on the road.

Configuring the RAV4 is going to depend on your goals. Do you need basic transportation? Then save your money and get the LE or XLE trims. Are you looking for something with most of the features of a premium SUV, but you’re not badge-conscious? Then the Limited or Adventure trims could be the best choice for you.

If we were spending our own money, we’d choose the XLE trim at $28,395. At this level you get the SofTex seats, as well as blind spot monitoring and rear cross traffic alerts, and the smart key system. More importantly, the XLE provides access to a menu of options that are not available in the base trim, so we could outfit the RAV4 exactly to our liking for about $30,000.

However, we’d be severely tempted by the Adventure trim at $33,995, because it looks like a lot of fun.

The 2019 Toyota RAV4 is without a doubt the best RAV4 ever made. By the feature list or the numbers, Toyota is bringing more content, more options, and a better base vehicle. The new RAV4 doesn’t cost more than the competition in the volume trims that most buyers will choose, and it’s providing a solid value justification for its price point.

The bottom line is that over a million buyers every year choose the RAV4 or one of its closest competitors. You cannot go wrong if you test drive all three and choose the one you like best.

Yes. There’s a very good reason the RAV4 is a popular vehicle, and the new generation offers even more value than before.

Nissan wants the 2023 Ariya to be its comeback EV, but the bar has been raised
We need more 7-passenger EVs, but the 2023 Mercedes EQS SUV has room to improve
Lux and refreshingly livable, Mercedes’ EQE moves EVs mainstream
Tesla to fix window software on 1M of its U.S. cars
Nvidia’s Drive Concierge will fill your car with screens
The Uber hack is an outrageous tale of a teen hacking for fun
How to watch Tesla’s AI Day tonight and what to expect
2023 Audi Q4 E-Tron first drive: the predictable and traditional EV SUV we need
Tesla AI Day 2022: Optimus, self driving cars, and everything else announced
Tesla hopes full self-driving beta will be out globally by the end of 2022
Elon Musk reveals first delivery date and customer for Tesla Semi truck
2023 Kia Niro EV first drive review: Practical doesn’t have to bore you to tears
Make your car smarter with an Echo Auto — just $15 today