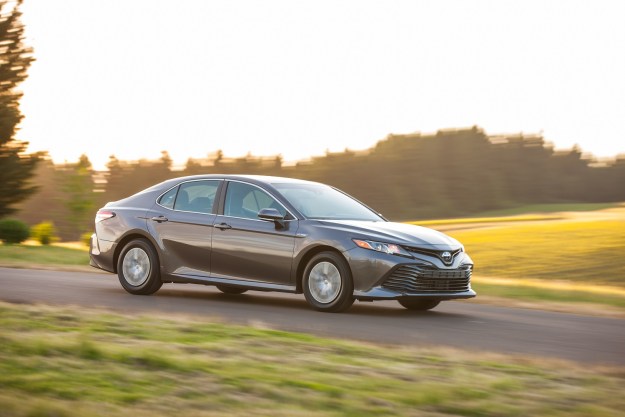 The Toyota Camry Hybrid has been around for more than a decade, unlike the Corolla, which just received a hybrid version for the first time in 2020. However, the Camry has benefited from Toyota’s regular updates of its signature and reliable hybrid system. It also benefited from a major redesign in 2018, which gave it a sportier look and up-to-date tech.

I drove the Camry Hybrid XLE, the highest trim level. Its MSRP starts at $32,730, and my test car had a few extras added, including the Driver Assist package, adaptive headlights, a moonroof, and the Navigation Package, which upgraded the audio system as well. All-in, including destination fee, my loaner Camry had a price of $39,766.

A Camry Hybrid without every bell and whistle starts at just over $28,000 for the base LE trim. There’s also a Hybrid SE that starts at $30,130 and adds a few luxury-lite touches, like synthetic leather upholstery and paddle shifters.

Since I was driving the swankiest Camry Hybrid, it’s only fair to compare it to the swankiest versions of its closest competition: The Honda Accord Hybrid and Hyundai Ioniq Hybrid. The Accord Hybrid’s top trim is similarly equipped to the Camry Hybrid XLE (with the extras in my loaner), and it starts at $36,245. The Ioniq Hybrid starts several thousand dollars lower, at $31,200.

However, the competition is also coming from inside the house. The Toyota Prius is synonymous with hybrid tech, and its top trim also has a starting price just north of $32,000.

Toyota’s design is often dismissed as boring, bland, and designed for the masses instead of having style. The Camry’s 2018 redesign, though, shook up the company’s design language with a more sporty look for the staid four-door midsize sedan. The front end is more aggressive, and the lines along the body sweep toward the rear of the car.

The interior of the XLE is clean and uncluttered. The center touch screen of the upgraded infotainment system doesn’t hover awkwardly above the dash, like the screen in the Camry. This trim also has tiger-eye wood trim, which adds to the sense of luxury.

As for roominess and comfort, it’s in the neighborhood of most midsize sedans. The batteries are arranged so they don’t intrude on the seating or trunk space, but the trunk is a bit smaller than the Accord’s and a lot smaller than the Ioniq’s. The Prius has less passenger space, but if you need to carry large or awkwardly shaped items, then its hatchback will be a big plus over the Camry’s trunk.

My loaner Camry’s upgraded Entune infotainment system had crisp, clear graphics on a screen that could be split to show multiple types of information, such as the next turn you’ll be taking in the nav panel, and the current song in the satellite radio panel. The touch inputs were simple, with physical buttons on either side of the screen, as well. My Camry’s upgraded infotainment included a bird’s-eye view camera that I appreciated when parallel parking.

Setting up my phone to use with the Entune system was a breeze. I was able to pair my phone in less than 10 seconds. Both Apple CarPlay and Android Auto are standard on all Camry Hybrids, a big step up from earlier model years, which lacked Android Auto.

The driver gets a screen tucked in between the analog gauges. That display is cluttered with information, though I’m sure that can be adjusted if you take the time to find out how. If I owned the car, I’d bring a cup of coffee to the driver’s seat and spend some time in the driveway with the electronic owner’s manual to set everything up how I like it. Not everyone will be so patient, however.

The deluge of information in that 7-inch TFT screen was overwhelming but useful, and steering wheel controls made it easy to scroll through different kinds of information. I could check my trip fuel economy, the track I was listening too, and the state of my driver assistance features, like lane keep assist and adaptive cruise control. My loaner also had a 10-inch heads-up display (HUD), which was massive and visible in any light. I relied on the HUD for basics, like speed, more than the 7-inch screen.

As you upgrade to expensive trims and start adding packages, you’ll have to choose which high-tech features you like best. The Accord Hybrid’s top trim includes many features found in my Camry Hybrid XLE with packages added. However, the Accord also has a Wi-Fi hotspot, while the Camry can connect with Alexa. If screen size is important to you, look elsewhere. The Ioniq Hybrid’s top trim has a 10.25-inch screen, and the Prius Limited has an 11.6-inch screen.

Toyota made a fascinating choice for the Camry’s hybrid system. The base LE trim has lithium-ion batteries, which are light and efficient. It gets 52 mpg combined.

But that’s not the car I drove. I had the XLE, which, like the middle-grade SE, has heavier and less efficient nickel-metal hydride batteries. It’s an older technology that served the Toyota hybrid system well for years, and it’s less expensive. Unfortunately, that means the fanciest Camry Hybrid has the lowest gas mileage: An estimated 44 mpg city/47 mpg highway/46 mpg combined.

That’s much better than a conventional gas-only sedan, but it’s not great for a hybrid. The Hyundai Ioniq hybrid turns in 55 mpg combined, and the Prius XLE gets 52 mpg combined. If you’re shopping the Camry and want to save money, the less expensive, more efficient base Camry is the one to choose.

Also, EPA estimates are optimistic. They’re a great way to compare apples to apples, but personally, I find my mileage rarely lives up to the EPA sticker. I drove surface streets exclusively during my time with the Camry Hybrid XLE and didn’t make a special effort to drive with fuel economy in mind. I saw just under 40 mpg which, frankly, is better than I expected.

No matter the trim package you’re driving, the Camry Hybrid puts out 208 hp in total. The transmission was smooth and quiet, and acceleration is punchy. Getting into the flow of traffic, or executing a quick pass, was no problem.

The Insurance Institute for Highway Safety named the 2020 Camry a Top Safety Pick+, its highest recommendation.

Safety Sense is as easy to use as any system on the market. The controls are on the steering wheel, and easily reachable without a glance once you know where they are. Switching the center display to show the safety tech makes clear the follow distance between you and the car in front of you, and your lane keeping status.

The Insurance Institute for Highway Safety named the 2020 Camry a Top Safety Pick+, its highest recommendation. The National Highway Traffic Safety Administration gave the Camry Hybrid five out of five stars in all its crash tests.

How DT would configure the 2020 Toyota Camry Hybrid

While it was great to have all the bells and whistles in the Camry Hybrid XLE, the better fuel economy in the LE is appealing. I’d go with that model and add the package that includes the moonroof, blind-spot monitoring, and the upgraded 8-inch touch screen and Entune system for about $2,700.

The 2020 Toyota Camry Hybrid has been around for years. The technology is proven and reliable, and the upgrades over the years have kept its design and technology current. It continues to be a solid choice for hybrid sedan shoppers.

There are few drawbacks to a car that comes with so many features even in its base trim. But paying for the top trim of this test car seemed like it wouldn’t pencil out. The base Camry Hybrid already comes with a lot, and you can add most of the good stuff for a reasonable price. Plus, the base model is more efficient.

Yes, if you want a reliable, efficient sedan at a reasonable price. Just reconsider springing for the top trim.