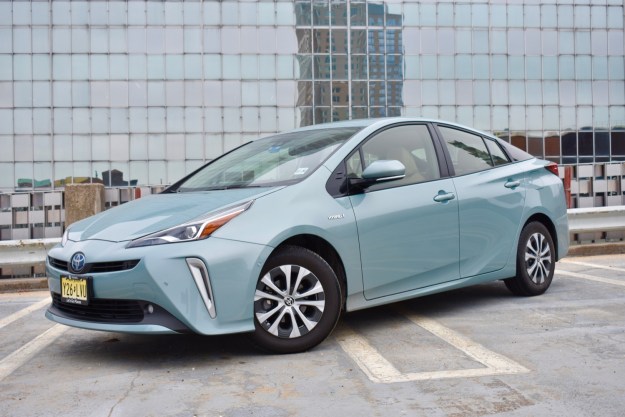 “The 2020 Toyota Prius is a reliable hybrid, but the competition is catching up.”

The Toyota Prius is the Levi’s jeans of hybrid cars. Since its launch in 1997, the Prius has done much to popularize hybrids, and is often the default choice. But the Prius is far from the only hybrid on sale today.

The competition now offers Prius alternatives dedicated maximizing gas mileage. More conventional cars are available with hybrid powertrains, too, including popular Toyota models like the RAV4, Corolla, and Camry. So, is the car that put hybrids on the map still the best choice?

To find out, we spent a week with a 2020 Toyota Prius. While the current-generation Prius has been around since the 2016 model year, Toyota has made some significant changes since then, including upgrades to the infotainment system and the addition of more driver-assist features.

Our test car also had the optional all-wheel drive system (dubbed AWD-e by Toyota), which was added for the 2019 model year. While a base front-wheel drive Prius L Eco starts at $25,280, our fully-loaded all-wheel drive XLE test car had a $31,005 sticker price.

Largely unchanged since the 2016 model year, the Prius’ exterior styling is, to say the least, unusual. The scowling face, bulbous profile, and bizarre taillights may look like they were designed by accident, but they are actually the result of a number of conflicting priorities.

Second- and third-generation Prius models had an egg-like hatchback shape that was distinctive, aerodynamic, and good for interior packaging. But it was also terminally uncool. Toyota tried to jazz things up a bit for this generation. The Prius is still a hatchback, but it looks more like a sedan. In an effort to make the car appear sleeker, designers lowered the front end. Unusually-shaped headlights and taillights help the Prius stand out.

Yet the Prius doesn’t look sleek or futuristic, and that’s because other factors had to be considered. Designers still needed to make the Prius as aerodynamic as possible to maximize fuel economy. They also had to package the bulky hybrid powertrain, while still providing a decent amount of passenger and cargo room. Beauty is in the eye of the beholder, but I think Toyota’s design team was pulled in too many different directions.

The design does meet its a functional goals, however. The Prius claims one of the lowest drag coefficients of any production car, at 0.24. That means it can slip through the air like a fish in water, helping to improve gas mileage.

Toyota achieved this without sacrificing interior space. The Prius has comparable interior space to other dedicated hybrids like the Honda Insight, Hyundai Ioniq, and Kia Niro. The Toyota even offers more cargo space than the tall-roofed Kia. Behind the wheel, I appreciated the Prius’ low beltline, which allows for taller side glass. This improves outward visibility and gives the cabin an open, airy feeling.

Toyota may be a leader in hybrid powertrains, but Japan’s largest automaker lags behind in other forms of automotive tech.

At first glance, the interior looks futuristic and different. But once you get behind the wheel, all you get is cheap plastic and an underwhelming infotainment system.

As with the Prius Prime plug-in hybrid, Toyota placed the speedometer and hybrid system status indicator in the center of the dashboard for no obvious reason. Below these displays sits a 7.0-inch touchscreen that controls most vehicle functions. The Prime’s 11.6-inch screen isn’t available on the standard Prius, but that’s okay, as we didn’t see the point of the larger screen when we drove the Prime. Toyota can barely make the 7.0-inch screen work properly.

Once you get behind the wheel, all you get is cheap plastic and an underwhelming infotainment system.

While many Toyota vehicles get both Apple CarPlay and Android Auto for the 2020 model year, the Prius is only available with CarPlay. Android users are stuck with Toyota’s own user interface, which looks dated and is slow to respond. The setup is more complicated than the pared-down interfaces in the Hyundai Ioniq and Kia Niro, and clunkier than the more elaborate interface in the Honda Insight. The screen washes out in sunlight.

Our test car had a head-up display (part of an $800 technology package). The display only shows current speed, but it was easy to read without being distracting.

The infotainment system may be a flop, but Toyota succeeded where it counts: under the hood. In addition to achieving good gas mileage, the Prius provides a comfortable driving experience that won’t spook first time hybrid drivers. The availability of all-wheel drive is a major bonus for car buyers in snowy regions.

The Prius uses a 1.8-liter four-cylinder engine connected to Toyota’s familiar Hybrid Synergy Drive system. Normally, an electric motor helps the gasoline engine drive the front wheels, but all-wheel drive models add a second motor at the back. It sends power to the rear wheels without any physical connection to the front wheels.

Toyota has used a similar setup in its hybrid crossovers for years. In the Prius, all-wheel drive only kicks in when onboard computers determine that extra traction is needed, and only up to 43 mph. We didn’t notice much of a difference from previous experiences with front-wheel drive Priuses (Prii?), which isn’t surprising given how rarely all-wheel drive is engaged in normal driving.

With our without all-wheel drive, the Prius is rated at 121 horsepower (Toyota doesn’t list a torque figure). While hybrid buyers probably aren’t looking for horsepower bragging rights, it’s worth noting that the Hyundai Ioniq and Kia Niro both sport 139 hp, while the Honda Insight boasts 151 hp. Acceleration felt adequate, and we were impressed by the seamless transition between gasoline and electric power.

The Prius is based on the same Toyota New Global Architecture (TNGA) platform as numerous other Toyota models, including the Camry and Corolla. TNGA really pays dividends for the Prius, giving it a feeling of solidity not normally seen in mass market hybrids.

Toyota also nailed the suspension tuning. This car feels genuinely nimble and fun, although numb steering and low rolling-resistance tires keep it from being truly sporty. Ride quality is good, although the suspension can send disconcerting jolts through the cabin over broken pavement. The brake pedal was also hard to modulate, with the brakes only biting after the pedal was about three quarters of the way to floor.

The main reason to buy a hybrid is fuel economy, and in this area the Prius lives up to the hype. Most front-wheel drive Prius models are rated at 52 mpg combined (54 mpg city, 50 mpg highway), but the L Eco model manages 56 mpg combined (58 mpg city, 53 mpg highway). Those are impressive numbers. However, the competition is catching up.

All-wheel drive comes with a gas mileage penalty. Our test car was rated at 50 mpg combined (52 mpg city, 48 mpg highway). We averaged 44.5 mpg (according to the car’s trip computer) over mostly highway driving. All-wheel drive usually decreases fuel efficiency, as the extra hardware adds weight, and energy is needed to drive both sets of wheels.

Still, this is currently the best case scenario for snowbound fuel misers. The Prius is the only hybrid car in its price range with all-wheel drive. The only alternative is to get a bigger, less aerodynamic Toyota RAV4 or Ford Escape – with much lower gas mileage.

We found the lane departure warning system to be a bit too sensitive. It beeped whenever we even came close to lane markings, like a nervous backseat driver. Conversely, the high beams were slow to come back on after being dipped for oncoming cars.

The Prius is an Insurance Institute for Highway Safety (IIHS) Top Safety Pick. It missed out on the highest Top Safety Pick+ plus rating due to “average” scores for its headlights and the passenger-side small overlap front crash test, but received the best possible score in all other categories. The Prius also received a five-star overall rating from the National Highway Traffic Safety Administration (NHTSA).

Toyota offers a three-year, 36,000-mile, basic warranty and a five-year, 60,000-mile, powertrain warranty. The battery pack and hybrid system components are covered under their own eight-year, 100,000-mile, warranty.

Hyundai and Kia offer longer basic and powertrain warranty terms, but can’t beat Toyota’s battery warranty. Both the Prius and Toyota in general have good reputations for reliability. Priuses have survived hundreds of thousands of miles of grueling taxi service in cities around the world, so this hybrid seems like a pretty good bet when it comes to long term reliability.

My test car was a fully-loaded XLE model, but if I was spending my own money, I would go with the base L Eco trim level. This version gets the best gas mileage of any Prius trim level, and still gets standard Apple CarPlay and the TSS-P bundle of driver aids. The XLE gets leather seats and is available with a head-up display, but I wasn’t  impressed enough by the execution of these niceties to pay extra for them.

The L Eco is not available with all-wheel drive, but the importance of that feature really depends on where you live. If brutal winters are the norm, then all-wheel drive is a must. If you live somewhere with mild winters, it’s better to go with the more fuel efficient front-wheel drive L Eco.

A good choice, but not the best

The 2020 Toyota Prius is a good car. It’s comfortable, practical, and delivers on its promise of excellent gas mileage. But it’s no longer the default choice.

With so many other hybrids on the market, there is no need to accept the compromises of the Prius. The Honda Insight, Hyundai Ioniq, and Kia Niro are all better to drive, and aren’t weird for the sake of being weird. The Toyota Corolla Hybrid delivers nearly the same gas mileage as the Prius, but in a more conventional package.

No – at least, it’s not our first or even second recommendation. The Prius is a trusty and reliable pick that’s sure to be reliable, but try the alternatives first.