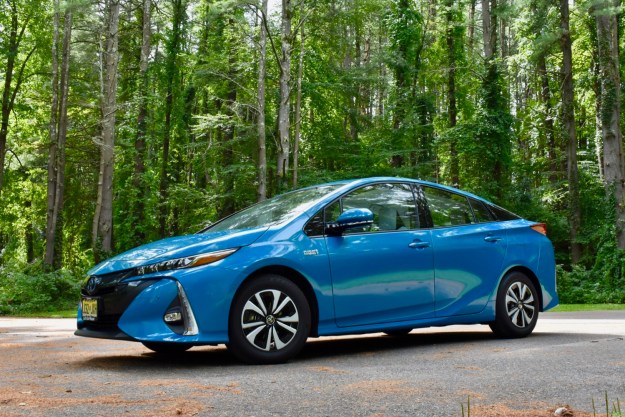 Toyota thinks you can’t get too much of a good thing. After Japan’s largest automaker revolutionized the art of saving fuel with its Prius hybrid, Toyota sought to capitalize on the car’s success by launching a family of different Prius models. But the 2019 Toyota Prius Prime is more than just a quick cash grab.

The Prius Prime is the second generation plug-in hybrid Prius. That means its battery pack can be charged from an external source, which in turn means the pack can be bigger. That means the Prime can spend more time driving on electric power than a standard Prius – saving more fuel.

Toyota launched the Prius Prime for the 2017 model year, and hasn’t made many changes to the car since then. It’s remarkable that this car exists at all, though. Toyota hasn’t shown much interest in cars with plugs, preferring conventional hybrids and hydrogen fuel-cell cars. The Prius Prime shows that attitude is changing. It’s more than just a Prius with a plug, it’s a distinct model that offers a major boost in gas mileage.

Does that mean you should put a Prius Prime in your garage? To find out, we spent a week with one. The Prius Prime is available in three trim levels – Plus, Premium, and Advanced. Our test car was a top-of-the-line Advanced, with a base price of $34,305. That’s a $6,000 increase over the entry-level Plus model, but it does include extras like a head-up display, park assist, rain sensing wipers, and an upgraded audio system.

Being normal is overrated

The Prius Prime looks like it was designed by aliens, but that’s what Toyota was going for. As with the standard Prius, and most of Toyota’s other recent models, designers went for a bold look. Toyota has a reputation for building boring, beige boxes, and exterior styling is one of the tools the automaker is using to try to change people’s perception. The Prius has historically advertised its eco-friendly powertrain with unorthodox styling, so designers had extra incentive to do something crazy. They also needed to distinguish the Prius Prime from the standard Prius – which already has a radical design of its own.

That’s why the Prius Prime looks the way it does. Designers needed to make something that stood out, while still maintain basic five-door hatchback proportions, and packaging the Prime’s plug-in hybrid powertrain. With its prominent jowls and taillights shaped like an infinity symbol, it’s unlikely that anyone will call this car different. But it certainly stands out.

The Prius Prime looks like it was designed by aliens, but that’s what Toyota was going for.

While it makes a fashion statement, the Prius Prime’s exterior styling has a negative impact on interior space. The Kia Niro PHEV and Subaru Crosstrek Hybrid both offer more headroom, as well as more rear legroom. Our test car also lacked a middle rear seat (Toyota is adding one for the 2020 model year), but at least the two rear passengers get a fixed console with cupholders – and more room to spread out. That might explain why, despite the Toyota’s disadvantage on paper, it earned high marks from everyone we put in the back seat.

The Prius Prime has more cargo space than the Kia Niro or Subaru Crosstrek with the rear seats in place. But while the Kia and Subaru have folding rear seats, allowing for more cargo space, the Toyota’s are fixed in place. The Prius Prime’s cargo area is also shallow, a bit like what you get in a Porsche 944 or a recent Corvette. That means there isn’t much room for taller items. Granted, if hauling stuff is your main priority, the Mitsubishi Outlander offers a plug-in hybrid powertrain in a taller, boxier SUV body.

Toyota seems to have put way more thought into how the Prius Prime’s interior should look than how it should work. The interior has a unique, futuristic look that’s let down by clunky tech.

With its black-and-white color scheme and complete lack of natural materials, the cabin looks like it was upholstered in discarded Stormtrooper armor (maybe Toyota has a factory on Endor we didn’t know about). It was a refreshing change of pace from the normal look of car interiors, but if this was our car, we’d be worried about keeping those expanses of white material clean. We also liked the airy feel of the cabin, courtesy of vast expanses of glass that also improve outward visibility.

The interior has a unique, futuristic look that’s let down by clunky tech.

Like a Tesla Model 3 (or a Saturn Ion), there are no instruments in front of the driver. Vital information, such as speed and remaining electric range, is displayed in a thin strip in the middle of the dashboard. That was supplemented by a head-up display in our Advanced test car. Infotainment functions are handled by an 11.6-inch portrait-oriented touchscreen that protrudes from the dashboard (base Plus models get a 7.0-inch screen). Our test car didn’t have Apple CarPlay, but Toyota is adding it for the 2020 model year. Some Toyota models are getting Android Auto as well, but it’s unclear when that feature will be added to the Prius Prime.

This setup looks pretty cool, but it’s not much fun to use. As with the 2020 Ford Explorer, we couldn’t see the point of having such a large screen, and for using a portrait orientation instead of a more conventional landscape setup. Aside from having a larger map view, we didn’t see any real advantage. Other than a cute startup animation, Toyota didn’t do anything new or interesting with the graphics. The rearview camera feed doesn’t even fill up the entire screen.

We also can’t see any practical reason for eliminating the instrument cluster. It didn’t take long to get used, but Toyota’s alternative solution didn’t add anything to experience besides a different look. It seems like Toyota wanted to give the Prius Prime a flashy interior (or maybe just copy Tesla), and didn’t invest enough to make it work.

At least the Prius Prime works where it counts. Toyota’s plug-in hybrid is nice to drive and very fuel efficient, although it falls short of the competition in one important area.

The powertrain consists of a 1.8-liter four-cylinder engine, working with a version of Toyota’s ubiquitous Hybrid Synergy Drive system. Total system output is 121 horsepower, which is a bit lower than other similarly-priced plug-in hybrids. For example, the Subaru Crosstrek Hybrid, which uses the same Toyota hybrid system as the Prius Prime, but mated to a Subaru boxer-four engine, has 148 hp.

The Prius Prime’s 8.8-kilowatt-hour battery pack allows for an EPA-rated 25 miles of electric only driving, at speeds up to 84 mph. That’s no match for the Honda Clarity Plug-In Hybrid’s 48-mile range, but the Toyota offers greater efficiency. The Prius Prime’s 133 MPGe combined in hybrid mode, and 54 mpg combined on gasoline, are the best of any plug-in hybrid in this price range. It’s just too bad Toyota couldn’t pull off such a commanding lead on electric range. In addition to the Honda, the Prius Prime is narrowly beaten by the Kia Niro (26 miles) and Hyundai Ioniq (29 miles). The Subaru Crosstrek and Mitsubishi Outlander trail the pack, but offer the advantage of all-wheel drive for foul weather.

The Prius Prime wouldn’t be our first choice for tackling a twisty road, but it’s a great commuter car.

An efficient gasoline engine is important, but electric range is the reason for buying a car like the Prius Prime instead of a regular hybrid. The Toyota’s electric range should be adequate for many people’s daily needs, but more would be better. Taking full advantage of that electric range also requires regular charging. A full recharge from a 240-volt Level 2 AC source takes two hours and 10 minutes, while charging from a standard 120-volt household outlet takes five and a half hours according to Toyota. DC fast charging isn’t available.

On the road, the Prius Prime offered a pleasant, but not remarkable, experience. The ride is very comfortable, but the suspension puts a stop to excessive body roll in corners. The car’s 121 hp may not seem like much, but it’s more than enough in real-world conditions. The instantaneous torque of the Prius Prime’s electric motor makes it feel more responsive than the numbers suggest. The 25-mile range rating is easily achievable in the real world, and we even managed 56.6 mpg, according to the car’s trip computer. The Prius Prime wouldn’t be our first choice for tackling a twisty road, but it’s a great commuter car.

The Prius Prime is a 2019 Insurance Institute for Highway Safety (IIHS) Top Safety Pick. The car received “average” scores for the passenger-side small front overlap crash test and its headlights, which kept it from earning the highest Top Safety Pick+ award. Crash-test ratings from the National Highway Traffic Safety Administration (NHTSA) aren’t available at this time.

Toyota offers a three-year, 36,000-mile, basic warranty and a five-year, 60,000-mile, powertrain warranty. The battery pack and hybrid-system components are covered under their own eight-year, 100,000-mile warranty. Toyota has an excellent reputation for reliability, and its hybrid systems have survived hundreds of thousands of miles of grueling taxi service in cities around the world, so the Prius Prime seems like a pretty safe bet. The car was given top marks for reliability by Consumer Reports.

Toyota did a good job of kitting out the Prius Prime with standard equipment, which means there’s little reason to go for a top Advanced model like our test car. The Toyota Safety Sense bundle of driver aids is standard even on the base Plus trim level, and the mid-level Premium gets the 11.6-inch touchscreen. The Advanced does add several features, including a head-up display, blind spot monitoring, park assist, rain-sensing wipers, and an upgraded audio system, but they’re not essential.

The 2019 Prius Prime is one of the most advanced vehicles in Toyota’s lineup, but it risks getting left behind in an increasingly-competitive segment. The Honda Clarity offers more range, but you may have trouble finding one outside California. The Kia Niro offers a more normal driving experience and greater practicality. The Subaru Crosstrek uses the same basic hybrid technology as the Prius Prime, with more power and all-wheel drive (but comes with an efficiency penalty). Nonetheless, the Prius Prime is a solid choice. It still gets much better gas mileage than a regular car or (if you charge it regularly) a regular hybrid, all in a usable (if oddly-shaped package).