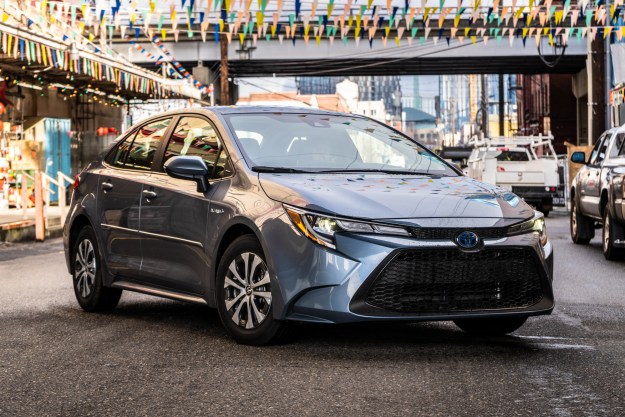 “The 2020 Toyota Corolla Hybrid is an excellent choice for frugal buyers.”

If you’ve been waiting for the hybrid version of Toyota’s most popular and least expensive sedan to come to US dealerships, this is your year. The 2020 Toyota Corolla Hybrid sedan is here, and it’s about $23,000 to start.

Corolla is not a new kid on the block. It debuted in the late 1960s, with more than 46 million sold around the world. Yet many other Toyotas received the hybrid treatment before the Corolla, including the RAV4, Highlander, and even the Camry, Corolla’s larger sibling.

The Corolla Hybrid is affordable, but it’s not the least expensive hybrid. The 2020 Honda Insight and 2020 Hyundai Ioniq are a few hundred dollars cheaper.

I tested the Corolla Hybrid in the Pacific Northwest’s rainy January weather. It’s an ideal time to test the car’s driver assistance features (without putting myself or the car in any deliberate danger).

Toyota has overhauled its line-up in the last few years, and this year it was Corolla’s turn. Toyota decided the car might as well be designed to accommodate a hybrid powertrain, as well as the usual gasoline-only engine. This speaks to the success of Toyota’s hybrid technology which, slowly but surely, has crept from the Prius into other Toyota vehicles.

While some cars can go on and on without a visit from the design team, the Corolla is popular, and Toyota’s design team frequently revisits it. Its last total redesign was in 2014, with a refresh in 2017. In between, Toyota has released special editions. The trim levels and features are significantly revised each year to keep up with new trends.

The 2020 Corolla Hybrid has a simplified version of the Toyota Camry’s new front, with a large grille and a sloping hood that dips low. It might not be the most thrilling design, but it’s nothing to scoff at given the price.

You’d find more cargo space in the trunk of the Honda Insight, or in the hatchback Hyundai Ioniq. If you’re only trying to decide between the hybrid and non-hybrid Corolla sedans, you’ll be happy to learn the hybrid system does not intrude on the trunk space. But truck is still among the smallest in its segment.

Seating is typical for a compact car. The front seats are fine for most people, and the rear seats are a tight fit for adults. The batteries are under the rear seat, so they don’t compromise the seating space for rear passengers more than is usual for a car this size.

The Corolla Hybrid has an 8-inch touch screen mounted high in the center console for maximum visibility. This is a common design for Toyota interiors, and while functional, it has always struck me as strange. It looks like it should fold down when you’re not using it, but it doesn’t. The screen’s odd design makes the interior feel more old-fashioned than it is.

The driver has a large, 7-inch digital display that you can customize to show whatever information you like. You can set it to show things like trip odometers, or the outside temperature. I set it to show current and trip fuel economy, as I like to see how my driving affects my average mileage in real time. This is a hybrid, after all.

Unfortunately for Toyota, its Entune infotainment system lags the Corolla’s competitors. It’s compatible with Apple CarPlay, but not with Android Auto. There is a USB port, which is common for any vehicle in 2020, but it’s located in an awkward spot on the right side of the center console.

The Hyundai Ioniq’s base system is easier to use and includes both Android and Apple compatibility, and there’s an upgrade available with a larger screen and wireless charging. The Honda Insight’s base infotainment system is sparse, and similar to what you’ll find in the Corolla. But like the Ioniq, Honda offers an upgraded system with a larger screen and a Wi-Fi hotspot.

For those who work their Prime membership for all it’s worth, the Corolla’s Entune system is compatible with Amazon Alexa. That’s still an unusual feature in any car, let alone one sold for under $25,000.

If you’re considering the Corolla Hybrid, you’re probably in it for the fuel economy. You won’t be disappointed. The hybrid is rated by the EPA at a combined 52 mpg, with city and highway averages in the low fifties. The gas-only Corolla is rated for about 33 mpg combined, depending on which model you’re talking about.

That’s great compared to most cars, but pretty typical for a modern hybrid sedan. The Honda Insight posts nearly identical numbers, with 52 mpg combined. The Hyundai Ioniq outdoes them both with a combined 58 mpg.

There is an EV mode that lets the car use battery power only at very low speeds and very short distances. At first, I found this disappointing, because any acceleration would kick it out of EV mode to get up to speed. Then I found a use case: creeping along in traffic. I could use EV mode while waiting for a light to change or an accident to clear.

I drove the Corolla a little over a hundred miles during the course of a week. This was mostly on surface streets and local highways, so I didn’t set it to cruise at 65 mph at any time. I also wasn’t careful with my acceleration, which I found to be peppy enough around town. I did take a few short trips to the grocery store about a mile away on rainy days, which is terrible for anyone’s gas mileage.

At the end of my test drive, the center display told me that my real-world fuel economy was in the mid-40s. That number is low, but my miles were entirely stop-and-go. If you’re able to set the adaptive cruise control for longer stretches than I did, your mileage may be closer to the EPA numbers.

The Corolla has Toyota’s Safety Sense suite of driver assistance features, with a full list of safety tech. I used all but two of the features; automatic high beams and pedestrian and cyclist detection. I was in the city, so high beams weren’t necessary, and no one stepped or rode in front of my car.

My harshest test came one rainy night along a road with iffy markings and erratic traffic patterns. The lane keep assist could find the center dotted lane, which had reflectors, but it had a hard time finding the right lane marker, which had crumbled away in places. The Corolla’s steering assist gently suggested I hug the center lane marker more than I would like.

I also had dynamic cruise control set on this trip, and it worked well. This system takes you all the way down to a stop, and when it detects that the car in front of you has moved, it nudges you to press a button, or the accelerator, start up again. It follows traffic as it should. It was able to adjust quickly when another car cut into my lane, and it read speed limit sign correctly.

Dynamic cruise control was able to adjust quickly when another car cut into my lane.

The Honda Insight was named a Top Safety Pick+ for its excellent crash test ratings and headlight illumination. The Hyundai Ioniq hasn’t yet been tested by the NHTSA, but it did receive top scores in all IIHS tests.

The Corolla Hybrid has a 3-year/36,000-mile comprehensive warranty, and a 5-year/60,000-mile powertrain warranty. It also has an 8-year/100,000-mile warranty for hybrid-related components.

The Toyota Corolla’s base MRSP is $22,950. Our as-tested price was $24,303. The extra money went only to a body protection package and carpet mats. Since I tested the car in January’s sloppy weather, these were smart additions on Toyota’s part.

The Corolla Hybrid comes in just one trim, the LE, and is only available as a sedan. There aren’t any options or packages for this car. If you visit Toyota.com and choose to build a Corolla to your specifications, you can pick the interior and exterior colors, and you can add accessories like floor mats and cross bars on the roof. That’s it.

You can pick the color, at least, and though the test car was in Celestite, a grayish-blue shade, Blue Print is definitely the way to go.

There’s not much in the way of luxury in the Corolla Hybrid. Some of the upper trims of the gasoline-powered Corolla are nicer than this one, and there aren’t any options, like leather upholstery or heated seats, to fancy up the hybrid. This Corolla is a hybrid for people on a budget whose first priority is a safe, dependable car, and whose second priority is fuel economy.

That said, the Corolla’s drive assist tech is solid for the price. It wasn’t perfect, but it worked well even in harsh conditions. I just wish Toyota’s Entune system was better, and offered Android Auto support.

Should you buy the 2020 Toyota Corolla Hybrid?

Yes. If you’re looking for a reliable, inexpensive sedan from a manufacturer with a decades-long hybrid record, the 2020 Corolla Hybrid is for you. Just don’t expect an amazing infotainment experience.