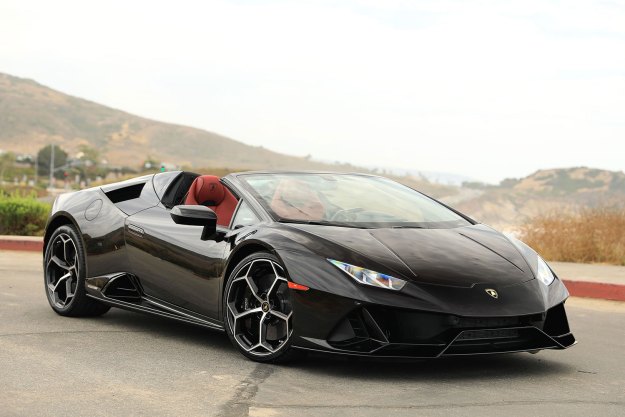 Since its introduction at the 2014 Geneva Auto Show, the Huracán has gone on to become the best-selling model in Lamborghini’s 56-year history. While the Urus sport-utility will likely take the top spot from the company’s “entry level” sports car in the coming years, the Huracán’s contribution to the recent success of the storied Italian brand is hard to overstate.

Some credit must be given to a steady stream of variants over the past five years, with the fleet-footed Performante serving as a high water mark for modern supercar capability at the time of its debut. But while the Performante showcased cutting edge tech like the Aerodinamica Lamborghini Attiva active aero-vectoring system, other aspects of the Huracán’s design were starting to show their age.

Keen to keep the Huracan’s momentum going, Lamborghini debuted the Evo coupe earlier this year, a mid-cycle refresh that brought Performante hardware to the standard Huracán model while also adding a few new tricks to the sports car’s repertoire.

For as capable as it is on a road course, many a Huracán will never see a moment of track time throughout its life span. Truth is, the allure of Lamborghini road cars has always been more about making a statement than cutting fast lap times. That means these cars need to truly shine out on the street, where they will spend the vast majority of their days. And to that end, the Huracán Evo Spyder may just be the most distilled supercar experience on sale today.

It takes just 17 seconds to stow the Evo Spyder’s soft top, which can be performed at speeds of up to 31 mph, and it’s a task well worth performing whenever the situation allows. One of the inherent benefits of topless sports cars is the unencumbered connection between your ears and the engine’s soundtrack, and that highlights several of the Evo Spyder’s strengths.

Nestled just behind the passenger compartment is a naturally aspirated 5.2-liter V10 that delivers 631 horsepower and 443 pound-feet of torque. Ostensibly unchanged from its configuration in the Performante, the high-winding mill howls to its 8000 RPM redline through a new center-exit active exhaust system that changes its volume and character based on both drive mode and throttle position.

Paired up with a seven-speed dual clutch gearbox and all-wheel drive grip, the Evo Spyder will sprint to 62 mph in a scant 3.1 seconds. That’s certainly enough haste to make the world around you turn into a blur in short order, but it’s worth noting that the Spyder does lose two-tenths of a second to its closed roof brethren due to the additional 256 pounds of structural reinforcement required, raising its dry weight to an even 3400 pounds.

Rear steering reduces the Huracán’s turning radius to a tangible degree, making it easier to thread through tight spots.

Like the coupe, the Evo Spyder benefits from an array of aerodynamic enhancements versus its LP610-4 Spyder predecessor. Highlights include a heavily revised front fascia and splitter as well as a new integrated rear spoiler, tweaks which Lamborghini says provide more than five times the downforce and aerodynamic efficiency of the outgoing model. From an aesthetic standpoint it amounts to the most angular Huracán yet, and the Spyder adds a pair of vertical fins situated just behind the seatbacks which taper downward toward the engine cover to give the car’s shape more continuity.

The changes inside are less obvious, but the new vertically-oriented 8.4-inch touchscreen infotainment system housed in the center stack is a welcome addition. As we mentioned in our first drive of the coupe, the lack of a physical volume knob is a frustrating omission, but the system’s fast response, sharp graphics, and genuinely useful gesture controls ultimately make up for a lot. Swiping up or down on the screen with two fingers, for instance, will adjust the volume from any menu screen without missing a beat. While less precise than a traditional knob, we acclimated to it fairly quickly, though it’s worth noting that the stereo is no match for the engine’s siren song when the top is down anyway.

Enhancing the standard Huracán’s handling performance was another key focus of the Evo overhaul. While most drivers probably won’t get a whole lot out of Lamborghini’s trick new predictive traction and stability control systems that comprise Lamborghini Dinamica Veicolo Integrata (LDVI) out on public roads, we discovered that some other dynamic tweaks yielded greater benefits in everyday use than they do on the race track.

Blasting around Willow Springs in the coupe earlier this year, we had to recalibrate our inputs around the Evo’s new four-wheel steering system, as its eagerness to change direction made the car feel a bit nervous and darty at times. That’s much less of an issue out on public roads, though, and the rear-steering reduces the car’s turning radius to a noticeable degree, making it easier to thread the Huracán through tight spots, be they mountain switchbacks or busy parking lots.

As with all Huracán models the Evo Spyder features three different driving modes – Strada, Sport, and Corsa – which are accessible by way of a toggle switch on the steering wheel. While each provides the Huracán with a distinct character, it would have been nice to see a customizable option like the “Ego” mode found on the Aventador.

The Huracán Evo Spyder fulfills the promises made by its wild look, and it does so without punishing the driver.

As it currently stands there’s no way to, say, pair the exhaust mode of Corsa with the suspension stiffness and automatic shifting of Strada. Sport serves as a happy medium most of the time, though there are moments where its general sense of alertness doesn’t quite strike the right chord for the situation.

Strada, by contrast, quiets the car down both literally and figuratively, muting the V10’s bark while softening the reflexes of the chassis. At times it’s almost too much: on several occasions we found the transmission unwilling to downshift lower than sixth gear without putting the throttle all the way to the floor. Doing so would more often than not result in a downshift to third or second gear, and far more drama than most drivers probably want when they’re just trying to overtake slower traffic. The best solution we found was to simply give the left shift paddle a few pulls to bring the transmission to the desired gear, make the pass, and let the gearbox return to automatic mode on its own after a few seconds.

How DT Would Configure This Car

While the Evo Spyder is a joy to drive with the top down, for taller drivers it is decidedly less so when the roof is closed. Evo models come with a grand touring seat as-standard, but can be optioned with the Performante’s racing buckets if so desired, which are mounted lower in the car and create more headroom as a result. We’d likely go that route if we were the ones signing on the dotted line.

In terms of aesthetics, we’re big fans of the not-so-subtle Arancio Xanto paint, which would go well with the matte black Loge 20-inch forged wheel. And though we probably wouldn’t be able to hear it most of the time, we’d also opt for the Lamborghini Sensonum premium audio system for the rare occasions where music might take precedence over the glorious bark of that V10. And considering how low the front splitter sits, the optional lifting system, which temporarily raises the front end of the car to clear steep driveways and the like, is practically mandatory.

The Evolution Of The Super Sports Car

Some lament the increasing level of civility that supercars have come to offer in recent years. We can’t help but wonder if all the gnashing of teeth comes from a place of experience or fantasy, though, because at the end of the day a supercar isn’t worth much if you don’t actually want to drive it.

The Huracán Evo Spyder fulfills the promises made by its wild look, but it does so without punishing the driver. At a moment’s notice you can turn up the wick to make enthusiastic observers smile (we did) or carve up a good stretch of road (we definitely did that too). At the same time the Evo can be as docile as a typical commuter car when you ask it to, and that makes the car a more viable option for normal day-to-day tasks.

That puts the Huracán Evo Spyder in league with heavy hitters like the McLaren 720S Spider and the Ferrari 488 Pista Spider, both of which offer more horsepower, but do so at the cost of a less emotive, turbocharged soundtrack.

But a decision like this is ultimately made by the heart rather than the mind. All three are absolutely fantastic mid-engined performance machines, each with its own unique take on the supercar formula. For would-be buyers that probably won’t make the decision any easier, but rest assured that if this Lambo roadster finds its way into your garage, you probably won’t regret it.