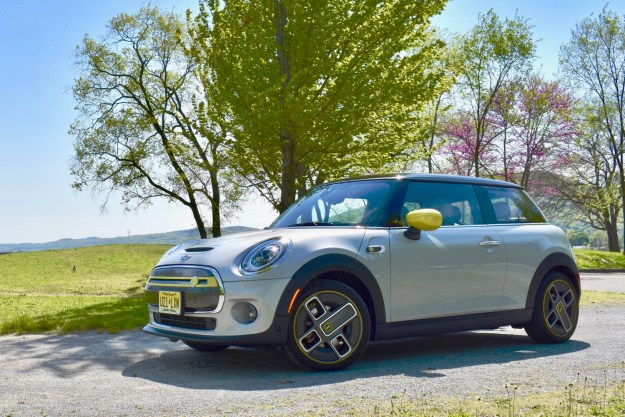 It’s not often that you get the choice of gasoline or electric powertrains for the same car, but that’s the case with the 2020 Mini Cooper SE. This new model has the same retro styling as a conventional Mini, but now with zero emissions.

Most other automakers have given up on electric versions of existing internal-combustion cars, opting for purpose-built models. So did Mini make the wrong call by launching the Cooper SE instead of a clean-sheet design, and how does the electric Mini compare to its gasoline siblings?

Let’s start with price. With a base Signature trim level that starts at $30,750, the Cooper SE undercuts most other electric cars. Power and performance are closest to the Mini Cooper S, which starts at $28,250. But the Cooper SE also qualifies for the full $7,500 federal tax credit, dropping the effective price down to $23,250. State and local incentives could slash even more off of the price, depending on where you live.

Inside and outside, the 2020 Mini Cooper SE is largely unchanged from the standard Mini, which dates back to 2014. The only visual changes are a slightly higher ride height (to accommodate the floor-mounted battery pack), an enclosed grille for better aerodynamics, and (on our test car) yellow trim and electric-specific wheels.

The electric powertrain is only available in the basic “2 Door Hardtop” body style, so you can’t get a convertible, or the more spacious “4 Door Hardtop” or “Clubman” wagon body styles. Passenger space and cargo capacity are identical to the gasoline 2 Door Hardtop, according to Mini, meaning you don’t get much of either.

Little touches like toggle switches give the interior a bit of character.

The current-generation Mini looks like an SUV compared to the 1959 original, and is a full nine inches longer than the first modern Mini, launched in 2001. However, this is still a small car. The back seats aren’t really suitable for humans, and the trunk is tiny. Front-seat space is decent, though, and the tall windows give the cockpit an airy, open feel. Like other Mini models, little touches like toggle switches give the interior a bit of character.

As with the gasoline Mini, the electric version is a great commuter car for city-dwelling singles. A Chevrolet Bolt EV or Nissan Leaf is a better fit for everyone else.

The Cooper SE gets an all-digital dashboard, consisting of a standard 6.5-inch touchscreen (Iconic models get an 8.8-inch screen), and a digital instrument cluster that looks a bit like the gauge pods used in race cars. Apple CarPlay and navigation are standard, but Mini does not offer Android Auto.

The screen sported nice graphics and was easy to use, thanks to a control knob and shortcut buttons for important functions. The screen’s placement inside a round housing was a little odd, though, as it was a literal example of putting a square peg in a round hole. The head-up display uses a physical plastic screen, rather than projecting images onto the windshield, but that’s to be expected in this price range. Information was easy to read, even in direct sunlight.

The screen sported nice graphics and was easy to use, thanks to a control knob and shortcut buttons.

As with parent BMW’s i3, Mini uses a clip-in apparatus instead of a conventional wireless charging pad, but it’s too small for some phones. The only alternative is to place your phone in a cupholder, where it will get tossed around like loose change in a dryer.es include forward collision warning, rain-sensing wipers, and automatic headlights. Park distance control and park assist are optional.

The Cooper SE’s low base price might explain the lack of standard features, but we’re still surprised to see so few optional features. The Chevrolet Bolt EV and Nissan Leaf offer more driver-assist tech, although you’ll have to pay extra to get it.

The driving experience is where we expected the Mini to stand out, and it didn’t disappoint. The car’s small footprint and the electric motor’s instant torque make a good combination.

That electric motor sends 181 horsepower and 199 pound-feet of torque to the front wheels. Mini quotes zero to 60 mph in 6.9 seconds, with a top speed of 93 mph. Output is pretty close to a gasoline Mini Cooper S, which has 189 hp and 207 lb-ft. The gasoline version will do zero to 60 mph in 6.5 seconds, and reach 146 mph, according to Mini. Note that the Cooper S is the middle child when it comes to performance, sitting between the base Cooper and the sportier John Cooper Works gasoline models.

At 3,153 pounds, the Cooper SE weighs about 300 pounds more than a gasoline Cooper S (thanks to its heavy battery pack). That makes a noticeable difference in handling, but the SE still feels pretty nimble, and the instant response offered of its electric motor felt like a fair tradeoff. The ability to get away quickly from stoplights and exploit gaps in traffic is more relevant to everyday driving than the slower responses of the steering and chassis in corners that result from the extra weight. That peppy acceleration is just plain fun, too.

The driving experience is where we expected the Mini to stand out, and it didn’t disappoint.

Compared to other electric cars, the Cooper SE’s smaller size makes it a bit more entertaining on twisty roads than the Nissan Leaf, but the Chevrolet Bolt EV is tougher competition. The Chevy weighs a bit more than the Mini but it’s also more powerful, with 200 hp and 266 lb-ft. The Bolt EV will do zero to 60 mph in 6.5 seconds, according to Chevy, and feels almost as nimble as the Mini in corners.

Like most electric cars, the Mini uses aggressive regenerative braking to harvest extra energy. This allows for “one-pedal driving,” where the car slows down as soon as you lift off the throttle. Electric-car fans will appreciate the strong regen, which boosts efficiency. Mini also included “Green” and “Green+” driving modes to further boost efficiency, along with a “Sport” mode for lead-footed drivers.

The Cooper SE is equipped with a 7.4-kilowatt onboard charger, allowing for a full recharge from a 240-volt Level 2 AC source in four hours, according to Mini, although we found charge times to be substantially longer if the battery wasn’t thoroughly warmed up first. Standard DC fast charging can do an 80% recharge in 40 minutes, with maximum power of 50 kW. The power level is fairly low, but that isn’t much of an issue in the real world thanks to the car’s small battery pack.

The Cooper SE has an efficiency rating of 108 MPGe combined, which isn’t very impressive. The Bolt EV and Hyundai Kona Electric manages 118 MPGe and 120 MPGe, respectively, with more interior space and range.

Mini offers a four-year, 50,000-mile, limited warranty, as well as free scheduled maintenance for the first three years or 36,000 miles of ownership. Mini has a mixed reputation for reliability, but the Cooper SE should at least require less regular maintenance because it’s electric.

Gasoline versions of the two-door Mini performed fairly well in crash tests, but those results may not be transferrable to the electric model. Lack of an engine and the floor-mounted battery pack may cause the Cooper SE to perform differently when the National Highway Traffic Safety Administration (NHTSA) and Insurance Institute for Highway Safety (IIHS) get around to testing it.

It may hurt the Mini’s value proposition, but the best option for tech is the top Iconic trim level. This adds a head-up display, wireless phone charging, and a bigger touchscreen. It also gets the upgraded Harman/Kardon audio system from the mid-range Signature Plus trim level.

Mini did not have a full online configurator for the Cooper SE ready at the time of publication, but if it’s anything like other Mini models, the Cooper SE should get plenty of customization options as well. It will be interesting to see if the aftermarket takes to the Cooper SE the way it has to gasoline Mini models as well.

On paper, the 2020 Mini Cooper SE doesn’t look very impressive. Indeed, the Mini’s lack of range and inability to carry more than two people comfortably seem to put it at a disadvantage to other mass-market electric cars.

Yet lack of practicality is also an issue with the gasoline two-door Mini, and that car sells pretty well. People don’t buy a Mini for cargo capacity, they buy it for its style and driving dynamics — which carry over to the electric Cooper SE.

Range is also reasonable given the Mini’s price. Other cars may offer more range, but they also cost substantially more. The base Nissan Leaf and Hyundai Ioniq Electric offer 149 miles and 170 miles of range, respectively, at prices closer to the Mini’s, with more interior space to boot. Neither car has the Mini’s personality, however, and while all three are small cars suited for city commutes, the Mini is the smallest.

As with previous gasoline Minis, the Cooper SE offers something unique that may not be for everyone. With so few choices available to electric-car shoppers, that’s a big deal.

Yes, if you’re a city driver looking for a affordable, nimble commuter.