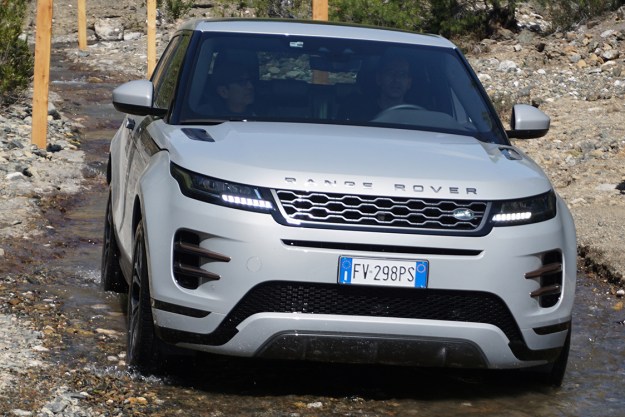 When the Evoque debuted back in 2012, the luxury crossover segment was still taking shape. Coming out of an era in which big-boned bruisers like the Cadillac Escalade defined what a posh SUV should be, the idea a diminutive luxury sport-utility seemed like a contradiction in terms.

But the first-generation Evoque changed the minds of many, and Land Rover would go on to sell nearly 800,000 examples of the sleek little machine over the course of its eight-year tenure. But the fact that overall sales in the segment went up significantly last year, while the Evoque’s went down, is perhaps the most damning evidence that Land Rover’s entry level four-wheeler was overdue for an update.

To be fair, some of that downturn can likely be attributed to anticipation of the second-generation Evoque we have here. Sporting an all-new platform with a slightly longer wheelbase, updated sheet metal, and a totally reworked interior, Land Rover clearly had no intention of phoning this one in. With stiff competition from the likes of the Volvo XC40 and BMW X3 – both of which considerably undercut the Evoque’s $43,645 base price – there’s simply no room for hubris in this hotly-contested segment.

But our well-spec’d tester commands significantly more coin than that. Equipped with optional extras above and beyond the First Edition package outfitted here, like adaptive suspension and 21-inch wheels, the price tag comes in at $59,215 with destination.

Does the new Evoque deliver on the expectations that a near-$60K asking price elicits? We headed to the hills outside of northeast Los Angeles to find out.

While the bodywork is all new, the second-generation Evoque is instantly recognizable. Land Rover chose to refine the crossover’s aesthetic rather than reinvent it, and the streamlined result is proof positive that crossovers can turn some heads. The Evoque’s rakish roofline and call-out visual cues remain intact, but the design has been cleaned up significantly, showing a greater focus on cohesion and modernity.

That narrative thread continues into the cabin. Gone is the dated infotainment interface and center stack, replaced by Land Rover’s InControl Touch Pro Duo system, which consists of two 10-inch high definition displays that handle audio, navigation, Apple CarPlay and Android Auto integration, and general phone tasks as well as HVAC control and vehicle behavior settings. The majority of system functions are handled by touch inputs, but Land Rover wisely retained a physical volume knob as well as a pair of larger multi-function knobs below it that allow for easier adjustments while on the go.

It’s a system we’ve seen before in other JLR vehicles like the Jaguar I-Pace. Much like our experience in Jag’s EV, the system looks great, boasting sharp graphics and a fairly intuitive layout, but its input response can leave something to be desired at times. The glossy screen surfaces also have a tendency to create glare that can make them difficult to read at a glance.

Overall, though, the interior of the 2020 Evoque is a nice place to be, with touch points that feel high quality and a minimalist vibe that presents itself as uncluttered rather than spartan.

Despite our tester’s 21-inch rollers, the Evoque rides surprisingly well around town, absorbing small impacts without protest with our tester’s optional adaptive suspension set to its most relaxed mode while also keeping road noise at bay. Switching the drive mode from Comfort to Dynamic firms up the response noticeably, but it remains far from objectionable for most daily driving situations. While it’s not outright sporty, the well-weighted steering and responsive brake pedal give the Evoque sure-footed confidence on twisty stretches of tarmac.

The powertrain is where the Evoque stumbles a bit, however. The crossover’s 2.0-liter turbocharged four-cylinder power plant comes in two different flavors, with the standard mill making 246 horsepower and 269 pound-feet of torque, while R-Dynamic models add a mild hybrid system to the mix and receive a healthy output bump to 295 hp and 296 lb-ft.

The former’s grunt is enough to move the Evoque around with reasonable haste, but overall response is far from perfect. Even with auto stop/start disabled, the drive mode set to Dynamic and the transmission in sport mode, off-the-line throttle response is so poor it had us reconsidering how we drove the vehicle. Drop the hammer from a dead stop in those settings and you’ll still have enough time to say “What the…” before anything resembling urgent acceleration begins to happen. Add auto stop/start back into the mix and dial the vehicle back into its typical driving settings, and the problem is only exaggerated.

The Evoque’s nine-speed automatic doesn’t help the situation, either. The transmission seems to be constantly searching for another gear in almost every driving situation, and significant throttle inputs tend to put the gearbox into a moment of contemplation while it decides what to do next. Taking over the shifting duties manually by way of the shift paddles does alleviate some of this, but you’ll need to plan for an upshift in the middle of a passing maneuver if you intend to go that route.

But the crossover does earn a few points back where the road ends, another point of interest where the Evoque puts some distance on its closest rivals. With 8.3 inches of ground clearance, a wading depth of up to 23.6 inches, and a 25-degree approach angle, the Evoque’s off-road capability isn’t just lip service, and features like the speed-adjustable Hill Descent Control, All-Terrain Progress Control, and off-road camera that displays potential obstacles in the Evoque’s path take much of the guesswork out of the process of getting from Point A to Point B in the rough stuff. We’d probably recommend a smaller wheel and tire package with more sidewall for would-be owners who plan to venture off the beaten path on a regular basis, however.

While our First Edition tester was well-appointed, if we were going to look toward the upper end of the Evoque line, we’d probably focus in on an R-Dynamic SE P300 model in Firenze Red Metallic hue, which starts at $52,145. Along with the additional power and the benefits of the mild hybrid system, the package includes 20-inch wheels, 16-way adjustable front seats, the Touch Pro Duo infotainment system, Meridian premium audio, a 360-degree camera system, adaptive cruise control, automated emergency braking and several other goodies as-standard.

Lovely to look at and nice to be in, the second generation Evoque makes a great first impression. For those that value the brand’s cache or need the off-road capability that the Evoque offers, that will likely be enough to sway potential buyers away from compelling alternatives like the Porsche Macan and Audi Q5, along with less expensive alternatives like the aforementioned Volvo XC40 and BMW X3.

For those that don’t, however, the Evoque’s lofty price tag and vexing powertrain would likely make this a heart-over-mind purchase for most crossover buyers.