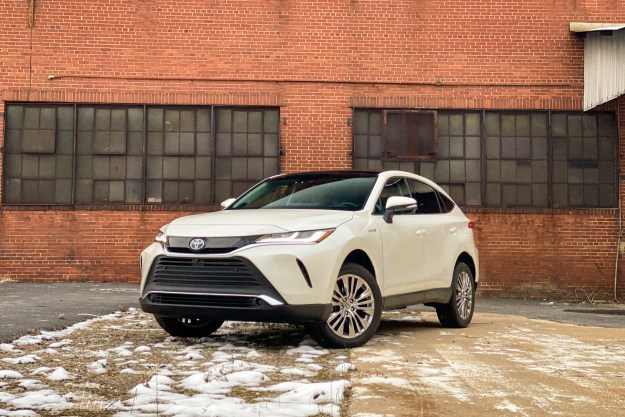 “The Toyota Venza returns as an upscale, hybrid-only SUV with some unique features.”

In case you didn’t notice, the season of the comeback is upon us. The Ford Bronco, Chevrolet Trailblazer, Chevrolet Blazer, Hummer, Toyota Supra, and Jeep Grand Cherokee have all been dusted off and revived. Old names tap into nostalgia, and aid automakers in introducing more modern machinery. In the case of the 2021 Toyota Venza, it’s giving the nameplate an entirely new slate, which is exactly what the model needed after the failure of the first-gen model.

We doubt many people decried Toyota’s decision to cancel the Venza when it was discontinued in 2015, but the two-row midsize SUV landscape hasn’t changed all that much in six years. Most of the same competitors exist, and few have done anything to move the bar. In this regard, the 2021 Venza is an oddity. Its hybrid-only powertrain positions it as one of the few electrified options, while the stylish design and available Star Gaze roof are clear signs of Toyota’s way of positioning it as a cut above its other SUVs. These qualities also help the Venza stand out in the class against the likes of the Nissan Murano, Ford Edge, Chevrolet Blazer, and Hyundai Santa Fe.

The Venza is on the more expensive side of things with pricing starting at $33,645 for the base LE trim, though every model comes with all-wheel drive as standard. Our test car was a top-of-the-line Limited trim with a few optional extras like a head-up display, Toyota’s Star Gaze panoramic roof, and rain-sensing windshield wipers, priced at $43,100.

Making a vehicle look upscale is trickier than it sounds. It usually favors fewer design elements and smooth lines — two things that Toyota designers have moved away from in an attempt to get more dramatically styled vehicles. With the Venza, Toyota’s used some restraint and it really works. The EV-like grille, chrome piece at the front that connects the headlights, tall rear fenders, and thin taillights that are connected with a horizontal light give the new Venza a design that puts the old model to shame.

Two-row midsize SUVs are all about styling. Without the third row, automakers have some leeway to pen more stylish designs. Some options go a little too far in an attempt to be unique, like the Hyundai Santa Fe, while others like the Honda Passport, play things a little too safe. Toyota’s managed to hit a sweet spot with the sweeping design, but the design comes at the expense of interior space.

The Venza may be classified as a midsize SUV, but it offers less interior space than the smaller Toyota RAV4 Hybrid that it’s based on. That’s not to say the Venza’s interior is cramped, it’s just smaller than nearly every other option in the class. The most obvious downside is the lack of cargo capacity. With the rear seats in place, the Venza offers just 28.7 cubic feet of cargo space. That figure opens up to 54.9 cubic feet with the rear seats folded down. That’s less than the majority of other midsize SUVs, which offer roughly 70 cubic feet in total, and it’s less than the RAV4’s (69.8 cubic feet of cargo space) total.

The electrochromic glass roof can go from frosted to transparent with the simple click of a button.

Another issue, which we’ve also encountered with other Toyotas, is just how loud the interior can get. The four-cylinder engine sounds buzzy, especially at startup, and transfers a lot of vibration into the cabin. On the highway, there’s a noticeable amount of wind noise that seems out of place for on an upscale vehicle.

The Venza may not offer a Lexus-like experience, but it certainly gets plusher the higher up the trim ladder you climb. Moving up to the XLE trim opens the door for stylish two-tone interior designs, though synthetic leather upholstery is the nicest seating material available, and wood-grain-style trim. The SUV’s real claim to fame is the available Star Gaze panoramic roof that’s only available as an option on the range-topping Limited trim. The electrochromic glass roof can go from frosted to transparent with the simple click of a button, allowing you to enjoy the entirety of the panoramic roof to its fullest. It’s also a feature worth bragging about because up until now, it has been reserved for ultra-luxurious cars.

Material quality in our Limited trim test car was stately for an SUV in this class. Instead of hard plastics throughout the entire cabin, like you’ll find on a lot of other Toyotas, there are soft-touch materials on nearly every part you interact with. The design of the center console, faux wood trim, and synthetic leather upholstery all look fantastic, while the color palette, which was a mix of grays in our tester, looked tasteful.

The touchscreen is a typical Toyota product, running the latest Entune system. Both touchscreens have dated graphics and a tricky layout. Beyond size, the larger 12.3-inch touchscreen ditches physical buttons. Both the HVAC and infotainment systems can be controlled via touch-capacitive buttons, which are frustrating at best. The larger touchscreen does bring split-screen functionality, which has a nifty feature that lets you choose which side of the screen is split, either the right or left. That makes it easier for either the driver or passenger to interact with.

While the Venza comes packed with all sorts of safety features, we should point out that the quality of the cameras isn’t spectacular. The camera has a fish-eye lens that distorts the image to a point where the 360-degree view isn’t that helpful. Luckily, the Venza is available with a video rearview mirror that gives drivers a clear view of what’s behind the vehicle without any obstructions.

Under the hood, the Venza utilizes the same hybrid powertrain as the RAV4 Hybrid, which is comprised of a 2.5-liter four-cylinder engine and three electric motors. All-wheel drive and a continuously variable automatic transmission are also included. It’s the only powertrain available, making the Venza one of the few hybrid vehicles in the midsize segment and one of the few hybrid-only cars on the market.

Toyota claims the Venza has a combined output of 219 horsepower. That might not sound like a lot, especially since the Murano, Blazer, Passport, and Edge are available with six-cylinder engines. At the end of the day, though, the lack of power doesn’t affect the Venza’s appeal.

In the real world, the Venza offers plenty of power for everyday use. The hybrid powertrain fills in gaps where a four-cylinder engine alone would leave you wanting more, which makes the midsize SUV feel far peppier than its horsepower figure lets on. The switch from gasoline to electricity happens smoothly, and the spaceship-like noise that is emitted when the Venza is running on electricity makes you feel like you’re in the future. If you plan on doing a lot of city driving, there’s an “EV Mode” that ensures the Venza is running on electricity alone to save gasoline or get around in the greenest way possible.

Moving away from its stylish exterior design, the Venza is tuned more for comfort than agility. A soft suspension setup results in more relaxed cornering than other midsize SUVs, but that translates to a comfortable ride over all types of road conditions. There is a “Sport” mode, but it doesn’t make much sense in this application. Instead, we put it into “Eco” mode and kept it there for the majority of the week.

If you need an SUV to tow cargo, you’re better off looking elsewhere, as the Venza isn’t rated to tow at all.

The Venza’s powertrain may leave some drivers wanting more performance, but it certainly makes up for it when it comes to fuel economy. You’re getting class-leading fuel economy figures of 39 mpg combined (40 mpg city, 37 mpg highway) and that’s with all-wheel drive. While that’s not as good as the RAV4 Hybrid (40 mpg combined), it’s far better than any other two-row midsize SUV and better than every other midsize SUV with a hybrid powertrain. The all-new Kia Sorento Hybrid gets the closest with a combined rating of 37 mpg.

In the real world, the Venza offers plenty of power for everyday use.

Just like other hybrids from Toyota, the Venza is also backed by a 10-year, 150,000-mile battery warranty and an eight-year, 100,000-mile warranty for components that make up the hybrid system.

With a price tag of over $40,000, our Venza Limited test vehicle showcased all of the things that help the SUV stand out in the packed class. While it’s possible to get into a more-affordable Venza, getting the awesome Star Gaze roof requires you to go with the pricey Limited trim. We think it’s one of the niftier pieces of tech on the market and it’s worth having.

So, we’d stick with the Limited and spend the extra $1,400 for the Star Gaze roof. With that, you’ve got a stylish, well-equipped SUV with a feature that will be the envy of the entire neighborhood.

Few SUVs cause waves these days. While the 2021 Toyota Venza doesn’t raise the SUV class to new heights or make one rethink everything about high-riding vehicles, it comes with a unique feature and distinct styling to make it a distinctive choice.

The Chevrolet Blazer offers sportier styling that’s borrowed from the Chevrolet Camaro sports car. It has a more spacious cabin, a more powerful V6 engine, and sportier handling than the Venza. Toyota’s hybrid is far more efficient and comes with more tech features.

If you’re interested in doing some off-roading and want something that can tow up to 5,000 pounds, check out the Honda Passport. It has 8.1 inches of ground clearance, an Intelligent Traction Management system to tackle different terrain and weather, as well as a powerful V6 engine. The Passport can’t match the Venza when it comes to fuel economy, interior materials, or tech features.

The new Hyundai Santa Fe is another two-row midsize SUV that’s offered with a hybrid powertrain. While it’s not as efficient as the Venza or as well-equipped when it comes to safety features, it has a more spacious interior, even more technology, a more powerful powertrain, and a more extensive warranty.

Yes. The Venza is a far better SUV than its predecessor and does enough to feel unique in a packed segment.