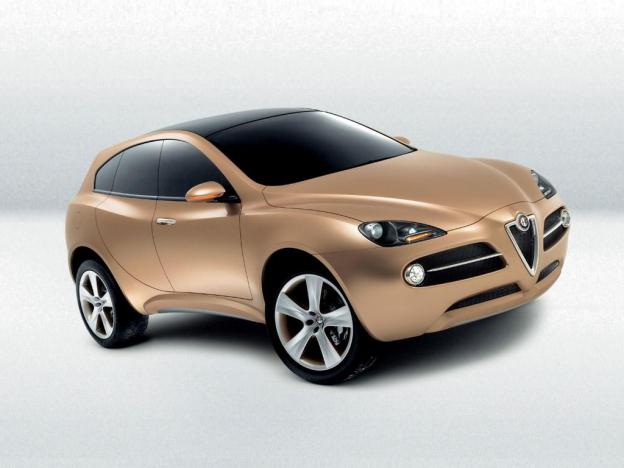 The Alfa apocalypse is officially here.

A report by the Telegraph confirms that Alfa Romeo will build an SUV. However, despite previous rumors that it would be a twin of the Jeep Grand Cherokee-based Maserati Levante, Alfa said it would be based on the smaller 2014 Cherokee, which was recently unveiled at the New York Auto Show.

Damien Dally, head of Alfa Romeo in the United Kingdom, told the Telegraph that the SUV will appear sometime in the next two or three years.

Basing the unnamed sport-ute on the smaller Jeep Cherokee means, weirdly, that it will have something in common with existing Alfas, but explaining the relationship may require a flow chart.

The Cherokee is based on the Dodge Dart, which is based on the Alfa Romeo Giulietta hatchback. That means, even with two generations of Chrysler DNA mixed in, the SUV will still be able to share powertrains with the Giulietta.

That means the 2.4-liter Tigershark Multiair four-cylinder engine, which is already deployed in the Cherokee and Dart, seems a probable choice for propulsion. It produces 184 horsepower and 171 pound-feet of torque in the Jeep.

Platform sharing might make sense in terms of cost, but it’s unclear how customers will react. The Cherokee’s styling and car-based chassis have already made it pretty controversial but, on the other hand, those attributes could make an Alfa-badged SUV more appealing.

An Alfa SUV that drives like a truck would be complete sacrilege, and the same is true of one that looks like a truck. The least Fiat and Chrysler could do is soften the blow by imparting some Alfa-esque handling and styling.

Alfa’s Kamal Geneva concept from 2003 (pictured at top) gets trotted out every time rumors of an Alfa SUV appear, and it never gets any better looking. Hopefully the stylists will figure something out.

Whatever the Alfa SUV ends up looking and driving like, there is a chance it will come to the United States as part of the brand’s push to sell 300,000 units a year by 2016.

Do you think an Alfa Romeo SUV is sacrilege? Tell us in the comments.

2023 Kia Sportage Hybrid first drive review: Style and substance
Mercedes-Benz EQS SUV is a luxury SUV for the family
Jeep Grand Cherokee 4xe first drive review: Do-it-all plug-in
Off-roading in a plug-in Jeep is like hiking with A/C
Jeep is launching its first two electric SUVs in the U.S. in 2024
2024 Chevrolet Equinox EV aims for affordability with $30,000 base price
Cruise’s robot taxis head to Arizona and Texas
Uber says it’s investigating ‘cybersecurity incident’
Nvidia’s Drive Concierge will fill your car with screens
The Uber hack is an outrageous tale of a teen hacking for fun
Tesla to fix window software on 1M of its U.S. cars
Lux and refreshingly livable, Mercedes’ EQE moves EVs mainstream
How to watch Tesla’s AI Day tonight and what to expect