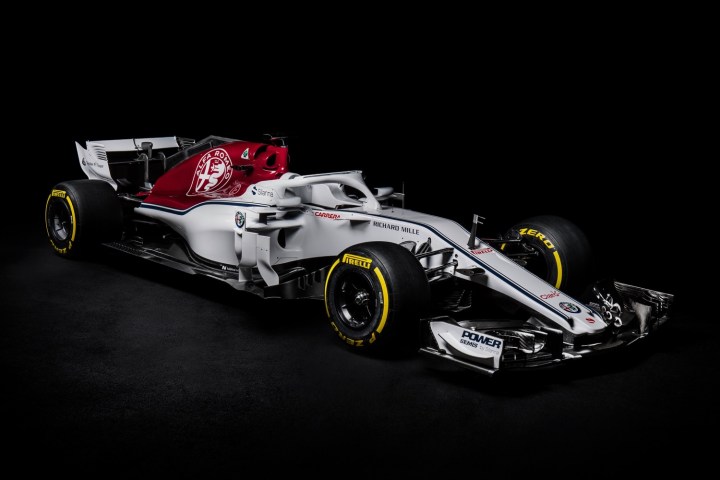 Alfa Romeo is returning to Formula One after more than 30 years away, as the title sponsor of the Swiss Sauber team. The newly unveiled Alfa Romeo Sauber C37 is the car that will bring the legendary Italian automaker back to F1 circuits and, like all 2018 F1 cars, it has an important new safety feature.

All 2018 F1 cars are required to have the so-called “halo,” a safety device designed to prevent driver head injuries. Consisting of a ring around the cockpit supported by a strut in front, the halo was chosen last year after tests of a windshield-like alternative produced unsatisfactory results. The halo has proven controversial because of its looks, as well as concerns about how it might impact performance and the ability of drivers to get out of a car in an emergency.

The C37 itself has the same complicated look as other current F1 cars, with lots of aerodynamic addenda aimed at increasing grip-enhancing downforce. Rules instituted in 2017 to make F1 cars look more streamlined and stylish haven’t had the desired effect, it seems.

Alfa has a storied racing history that reaches back well before the first F1 championship. Prewar Alfas like the Tipo B helped define the concept of the modern race car. Alfa drivers won the first two F1 championships, in 1950 and 1951. It continued to participate in F1 as both a team and an engine supplier into the 1980s. Alfa’s new partner Sauber was founded in 1970, and has been associated with a number of automakers over the years. Sauber has only won a single F1 grand prix (in 2008), but it did win the 24 Hours of Le Mans in 1989 in partnership with Mercedes-Benz.

Alfa Romeo Sauber’s 2018 driver lineup consists of Sweden’s Marcus Ericsson and Charles Leclerc, who hails from Monaco. Leclerc is a protégé of Ferrari, which provides a hint at how the Alfa Romeo-Sauber marriage came to be. Ferrari is one of the powerhouses of F1, and a corporate cousin of Alfa. The Alfa deal gives Sauber access to more of the Prancing Horse’s resources. For example, Sauber will use the newest Ferrari engines in the C37, instead of the year-old designs it used previously.

That alone could be a big boost for what is currently one of F1’s least-competitive teams. Ferrari, meanwhile, will get a new ally to vote with it on sporting regulations, and a lower-tier team with which to place promising new drivers like Leclerc. But what does Alfa Romeo get out of all of this?

The C37 is a Sauber with a Ferrari powertrain; the only thing Alfa Romeo contributed was the logo on the engine cover. But that logo may also be the most important part of the car. The C37 probably won’t win races, but the powers that be apparently think just having an Alfa-badged race car on the track will be enough. Partnering with Sauber was a quick and (relatively) cheap way to do that. Alfa’s F1 comeback is all about marketing.